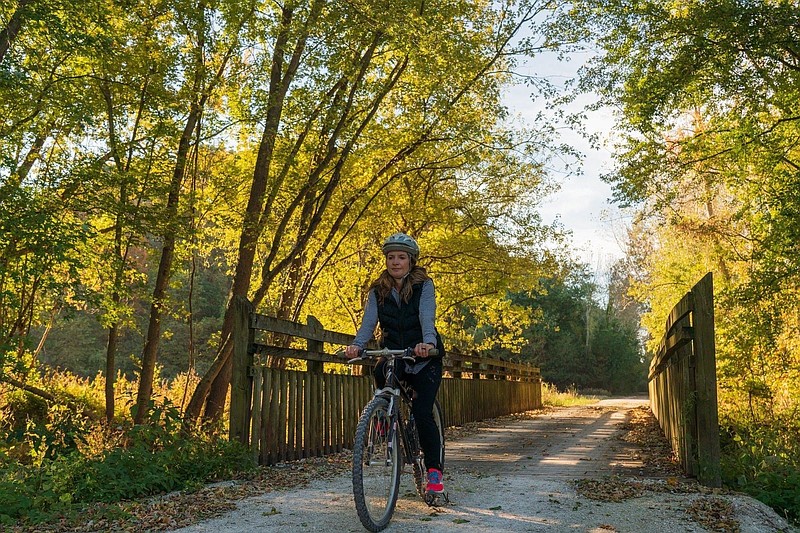 For Melanie Robinson-Smith, state parks and the Katy Trail are a calling.

Smith is the deputy regional director for the northern region of Missouri State Parks.

Smith's zone is located along the Interstate 70 corridor and incorporates eight state parks and historic sites.

Four of those parks manage a section of the Katy Trail, which gives Smith another hat to wear: Katy Trail coordinator.

While the parks manage sections of the trail, Smith is responsible for everything pertaining to the entire trail, like signage, event coordination, advisories, project planning, maintenance standards, and hiring and training staff.

"It's a pretty busy job, that's for sure," Smith said.

No two days are alike, but Smith said that's how she likes it.

Smith, who is originally from Sturgeon in northern Boone County, has been in her current position for about six years.

However, she's been working on the Katy Trail for even longer.

After graduating from the University of Missouri-Columbia with a degree in parks, recreation and tourism and a brief stint with the Missouri Lottery, Smith began working with State Parks as a special events coordinator.

In that role, she helped plan and coordinate the annual Katy Trail ride.

"I was familiar with the Katy Trail and loved the trail," Smith said. "You don't find too many people that don't love the trail these days."

Smith married and moved to Arkansas, but couldn't stay away from parks as she found a job doing technical outreach for Arkansas State Parks.

After a few years, Smith said they moved back to Missouri, and she began working as the community services coordinator for the city of Kirksville, where she was also the parks and recreation director and assistant city manager.

She then spent some time in Maryville, working for the area chamber of commerce before settling into her current role with the Department of Natural Resources.

"I'm pretty lucky to be able to work within that field," Smith said. "I have done a variety of things over the years, but I'm enjoying this job quite a bit."

Smith and her team perform the day-to-day maintenance, upkeep and operations of the Katy Trail and regional state parks.

At 240 miles long, and an additional 47.5 miles connecting on Rock Island Spur, the Katy Trail spans the width of the state and is considered the longest developed rail-trail in the country.

More than 400,000 people visit the Katy Trail each year, which means Smith meets a lot of interesting people from around the state, country and world.

"It's very rewarding to meet people who appreciate the park and the park's resources - both natural and cultural - in the same way that we do," Smith said.

Smith said she appreciates working for a mission-driven department and seeing the work her and her staff do positively impact state park visitors.

With the Katy Trail never too far away, Smith said she is drawn to it because it is accessible. The trail is relatively flat, which she said makes it easier to navigate for people of all abilities.

Smith said the trail, which turned 30 last year, is working to get back to normal operations after the COVID-19 pandemic. A part of the trail has been restored after a rock slide closed it for several months and new restrooms were added to the trail near Sedalia.

Additionally, the Rock Creek bridge replacement contract was recently awarded and should be complete by next year's on-season.

While the trail leaves are little behind this year, Smith said they've started to pop over the last week.

"On these nice, sunny days, it's definitely worth the trip to get out and see what is out there," she said.