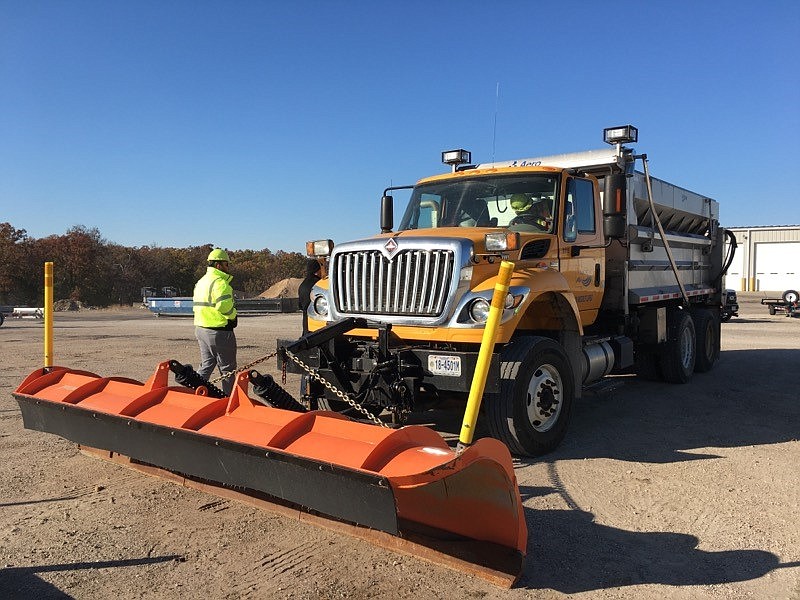 A crew with the Missouri Department of Transportation performs a snow operations drill in 2020 in advance of winter.

More than 60 percent of the Missouri Department of Transportation staff has been replaced in the last four and half years. And the lack of experienced employees has put the department in a bind as the winter season approaches.

Those staffing concerns dominated the department's reports Wednesday to the Missouri Highway and Transportation Commission at its monthly meeting.

The department has had considerable turnover, MoDOT Director Patrick McKenna said, and is currently short-staffed in professional equipment operators, equipment technicians and "all across the board" for winter operations.

Some turnover is healthy as employees retire, he said, but a rate of 13-15 percent each year is not, particularly when knowledge and skills are required for the jobs.

"It's a problem the commission has instructed us to fix and that's our intention," McKenna said. "We have to make that case and will continue to make that case publicly, and we're trying to work through all the specifics of those actions now."

The measure went into effect Oct. 1, but hasn't significantly moved the needle on winter operations staffing.

"We know that doesn't solve the whole problem, but it was the commission that asked us to shake out the seat cushions and to make sure we were doing everything we could within our existing budgetary appropriations to make a difference here," McKenna said.

He said it's not enough to do everything the department wants, but it is a meaningful gesture to support employees on the front line.

While everyone will be working winter operations, McKenna said the limited staff won't be enough if there's a statewide snow storm that lasts through more than one shift.

"Our goals haven't changed, but it's going to take longer," McKenna said.

Natalie Roark, MoDOT state maintenance director, said the farmer's almanac is predicting extreme wintery mix and cold temperatures south of Interstate 70, making up what could be one of the longest and coldest winters in years.

An average of 3,400 snow plow operators and 1,580 trucks are required for operations to occur around the clock, Roark said, which often results in staff working more than 500,000 labor hours and plowing more than 5 million miles of roadway each year.

Missouri has the fewest resources per lane mile of the states that get considerable snow, according to the department's report to the commission. As a result, MoDOT staff plow more roadway than drivers in other states.

Illinois, for example, spends triple what Missouri does on winter weather treatment and has triple the resources dedicated to clearing roadways.

Roark said filling the snow plow operator positions has consistently been a problem, but the competition for commercial drivers has been amplified during the last year.

The department used the same hiring campaign as last year, but Roark said it wasn't successful in filling the positions needed to last a statewide storm lasting more than 12 hours.

Additionally, roughly 20 percent of the winter operators on staff have less than one year of experience, she said.

New staff members are required to undergo training, which includes riding along with a seasoned truck operator for four hours, then driving with the experienced operator as a passenger for four hours during an actual weather event.

"That training piece ties up two operators in the cab of the truck, so not only are we going to be low on staffing, but we're going to be likely responding with delayed response times to reach our goals in the training efforts as well," Roark said.

Roark said shifting resources and equipment to different areas of the state as necessary is a strategy the department is looking at this year.

MoDOT has strike teams already, but there are concerns surrounding the staff's unfamiliarity with roads and what that means for safety.

The COVID-19 pandemic and a rise in aggressive driving are additional concerns amid MoDOT's winter operations, Roark said.

"Unfortunately, it's not where we want to be, but our team has been very strategic in looking ahead at how we can do the best to deliver a successful winter season," Roark said.

Commissioner Terry Ecker said he hopes the half-dollar pay raise will prevent the department from experiencing similar situations in the future.

Despite the challenges, McKenna said he remains hopeful for the future as the federal government is looking to invest more in infrastructure. Gov. Mike Parson has made bridge infrastructure a focus for the state and the statewide motor fuel tax is in place.

Additionally, MoDOT received an unmodified clean opinion on its annual audit for the 22nd consecutive year.

RubinBrown LLP conducts the department's annual audit, which is required by state law.

Brenda Morris, MoDOT chief financial officer, said the increase can be attributed to a higher cash balance and an increase in capital assets.

The cash balance increased more than $415 million because of federal COVID-19 relief and local investments in projects, Morris said.

Capital assets, which incorporate the value of Missouri highways and bridges, as well as land, buildings, equipment and vehicles the department owns, grew by more than $418 million from fiscal year 2020.

RubinBrown CPA Ted Williamson said there were no material weaknesses or significant deficiencies found while conducting the audit. He said estimates were reasonable and there were no corrections, disagreements or difficulties to report.

The commission voted to retain the audit company for another year.