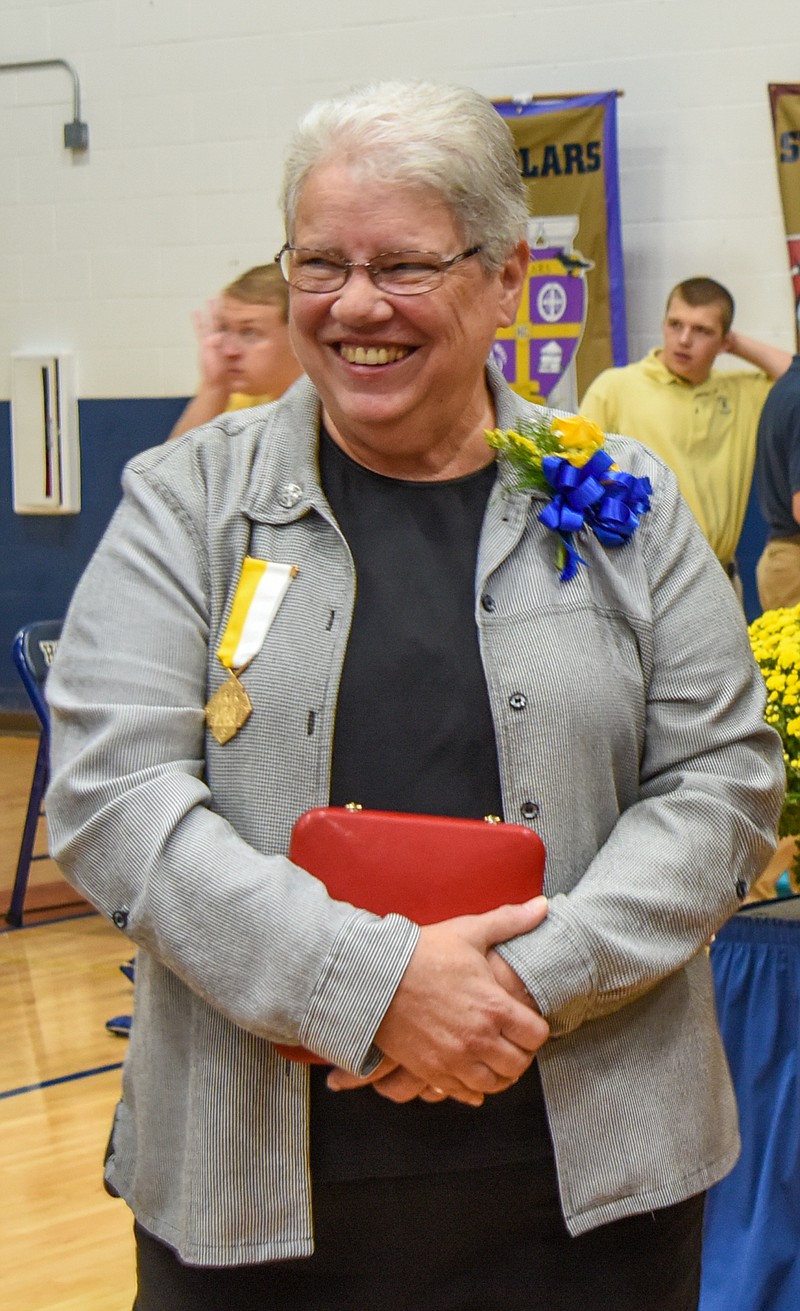 Sister Jean Dietrich had no idea what was coming when she professed final vows as a School Sister of Notre Dame (SSND).

She was teaching at her high school alma mater, where she had first encountered many of the sisters whose example had drawn her to religious life.

"I remember an overall feeling and awareness and knowledge of 'this is where I need to be,'" she recently recalled. "There was a comfortableness in where I was and that I could visualize this being my life - not necessarily where I was or what I was doing, but that I would be in this community of people of like minds and hearts.

"That was really what I wanted to do for the rest of my life," she said.

Not long after that, a sister in congregational leadership invited Sr. Jean to join the administrative team of Helias Catholic High School.

Sr. Jean had promised God to be obedient to her superiors.

She said "yes," and that "yes" continues to this day.

This year, Sr. Jean celebrated her 50th anniversary as a School Sister of Notre Dame.

On behalf of Pope Francis, Bishop W. Shawn McKnight honored her and longtime Helias faculty member Brother Steven Schonhoff of the De La Salle Christian Brothers with the Cross Pro Ecclesia et Pontifice ("Cross for the Church and Pontiff") medal, in recognition of their distinguished service to the Church and papacy.

Sr. Jean thanks God daily for all the people he has put into her life to bring her to this point.

"I wouldn't be here without every single being he has graciously let into my life," she said.

She grew up in a large Catholic family on a dairy farm near Quincy, Illinois.

"I learned to drive a tractor when I was about 9," she recalled. "I liked being outside and helping on the farm and playing around with mechanical stuff."

When there was hay to bale, she usually drove the tractor, and her older brother was on the trailer.

Farming is a good way to learn to be totally reliant on God.

"My folks were so dependent on the weather," Sr. Jean noted. "They had good years, they had bad years. And they were probably the most faithful Catholics I've ever seen."

All of the Dietrichs went to Mass on Sunday. The whole family prayed the Rosary together after supper every evening in May and October.

There wasn't a lot of extra money laying around.

"There were eight of us," Sr. Jean said. "But we never wanted for anything, and I never heard my parents argue about anything."

There was no hot-lunch program at St. Anthony, the three-room Catholic school they attended.

She remembers her home life as a great way to learn about the faith and appreciate living in community.

"I had wonderful teachers in high school - most of them Notre Dame Sisters," she said.

She was impressed by how they related to her and her classmates.

"The interaction you saw with them was something I really wanted," she said. "I think that's where the first seed of actually wanting to be a Notre Dame Sister actually started. I felt a desire that grew stronger as I went through high school."

The SSNDs were founded in Germany to promote the unity for which Jesus entered the world. Most of the sisters are involved in education or parish ministries.

Sr. Jean and a friend spent two summers on a traveling softball team in Pekin, Illinois.

"It was a really, really fun," she recalled. "We played in front of large groups of people. We took a trip east to Connecticut each summer and out west to Colorado and different places like that. It was a great experience."

She believes she could have played for a college scholarship.

"But by that time, my mind was already made up to enter the School Sisters of Notre Dame," she said.

"It was a sacrifice for mom and dad," she recalled. "When I entered, it was with the notion that I wouldn't be going home more than two times in my lifetime."

Parents could visit their daughters once a month during their first year in formation at the motherhouse in St. Louis.

"That was a two-and-a-half-hour drive for a picnic and a couple of hours of visiting in a circle on the lawn, then getting back in the car and heading back to Quincy," she said. "And they made that drive a lot."

She completed a bachelor's degree in chemistry with a minor in biology from the SSNDs' former Notre Dame College in St. Louis.

"The teaching staff was really wonderful," she said. "Women with doctorates. In my chemistry program, the student-to-professor ratio was 2-to-1. Your turn came around really often. There wasn't much hiding room behind anyone else in the class."

She didn't think much about teaching until that time.

"I just wanted to be part of this great group of women," she said.

One of her mentors was Sister Elbert Oelkers SSND, who was her college instructor for one class and later taught with her.

"She was delightful to watch with kids," Sr. Jean recalled. "She could see the goodness, the humor in every child. She was infinitely patient. And yet, she was a very, very good math teacher. She was able to impart knowledge in a way that kids could grasp it, and if they couldn't get it the first time, she would circle around and figure out another way to do it."

That's when she discovered her gifts are best suited to high school.

"I'm more comfortable being able to talk to kids on a more adult level," she said.

She remained at St. Paul until 1974, and then taught at Mater Dei High School in Breese, Illinois, for three years.

She was missioned to Notre Dame High School in her hometown of Quincy from 1977-1983, while working on her master's degree in science education from Creighton University in Omaha, Nebraska.

She also spent time with her parents, who were in fragile health.

"It was nice to reconnect with my family in a different way," she said. "You don't realize how nice it is to be able to pop-in for a Sunday afternoon or go to church with your parents and go to brunch."

Jefferson City native Sister Rose Miriam Wegman was a member of the SSND provincial council in 1983 when Sr. Jean was teaching in Quincy.

Helias needed an assistant principal. She and the council thought Sr. Jean would be a good fit.

The school had been founded by School Sisters of Notre Dame and De La Salle Christian Brothers.

"I came down here and talked to Jim Rackers, who was the administrator, and met with the sisters here at the time," Sr. Jean recalled. "They wanted a sister in administration, which was stretching the point, because I hadn't finished my master's yet."

She wound up taking some administrative courses at Lincoln University to complete her degree and her Missouri certification in education administration.

She served as assistant principal while teaching chemistry part-time for the first two years.

"That wasn't really tenable," she acknowledged. "You'd be in the middle of a lab, and someone would need your attention as assistant principal."

"I've always liked the people I've worked with," she said. "I've always learned from every one of them and hopefully been able to help them, too."

She said Rackers, longtime teacher, coach, principal and administrator at Helias (now deceased), was not the "gruff old man" some people saw him as.

"Jim would make me laugh," she said. "He helped me. He supported me."

She was amazed at how he oversaw the financing and construction of the fieldhouse that now bears his name.

She also enjoyed working with his successor, Denny Hughes.

"His people skills are just tremendous," Sr. Jean said. "He started out in education, and went out and spent some time in business and came back to education. He brought some ideas back that helped us enlarge our thinking."

"You couldn't help but get good ideas from Sr. Barbara," Sr. Jean said. "She is an educator in every fiber of her being."

Sr. Jean enjoyed mentoring and learning from her successor as principal, Kenya Fuemmeler, who wound up serving as president and principal of the school before accepting a position closer to home this year in Boonville.

"It's amazing how well we worked together, and we have become best friends," Sr. Jean said. "She has enthusiasm and a lot of good ideas. She taught me tricks of the trade that I still use when I work with students."

One of their intergenerational activities is butchering meat.

"It's actually a good time to catch up with everybody," she said. "Those of us who are unskilled laborers, we're at the table we call the 'hamburger helpers.' We trim the meat, and we make hamburger out of what we trim."

She also fills in for some of the teachers.

"These are good kids," she said of the students. "They know you care about them. If you have something worth teaching them and you go in prepared, they're going to listen."

Having served as a coach in every assignment before Helias, she sees sports as a way for young people to develop important life skills and grow in awareness of their God-given talents.

"But you have to have a balance," she cautioned. "For some kids, sports is a place where they really shine. They see their gifts, which come from God, and they need to be sure they're using them to glorify God."

She enjoys attending extracurricular activities and rooting for the students.

"It means something that you pay attention to them and recognize them as individuals," she said. "I think that's the key. You have to help each kid understand how special they are."

She's looking forward to helping students get involved in helping people at the new Catholic Charities center when it opens this fall.

She noted assisting people in need - especially families, mothers and children - has been a pillar of the SSND mission since the congregation's founding in the 19th century.

"I'm really eager to see all of that come together," she said. "I think that's a good direction for them and for us."