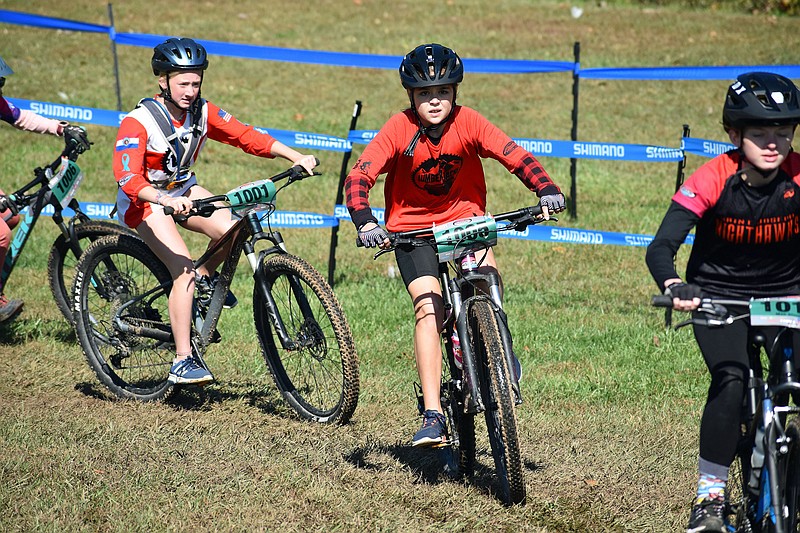 Wave after wave of cyclists shot out of the starting gates Sunday at Binder Park, chests heaving as they pumped their pedals.

They were competing for honors at the first mountain bike state championships for the new Missouri Interscholastic Cycling League.

"We had a really great day," said Nick Smith, one of the team's two coaches. "Every kid did better than they normally do, we had every kid on the podium who's normally there and some who typically aren't."

Shayn Ivy, 16, was the state champion in the boys junior varsity division. The Capital City High School student previously ran cross country and started mountain biking in May after one of his teachers suggested he give it a try.

"I kind of like the thrill of it," he said. "It's a little easier than running cross country at times. It's more fun racing."

It's a faster speed and there are obstacles to avoid, such as roots and mud.

"You have to be focused the entire time," he said.

Ivy's younger brother, Grant, 11, said he hopes to join the team next year.

The team has a dozen members - mostly from the Cole County area - and it's hoping to grow.

This race was the last of a five-race series this season. Points are awarded at each race to determine placements at the end of the season. Qualifying is not required to race at the state championship, which is worth double the points of the other races.

The next season starts in July. Cyclists can start on the team in sixth grade and compete through high school.

Smith and Stoney Cranmer, the team's other coach, said the sport is booming in other states, and they expect it will grow in Missouri as well. Utah, they said, has 8,000 youths who participate in mountain biking leagues.

Due to the pandemic, this was the first year the league had races.

Each lap of the race was about four miles. Divisions with younger and more inexperienced riders raced a single lap, while the more experienced ones raced four laps.

Jefferson City's team was one of 21 teams from throughout Missouri at the event, part of the National Interscholastic Cycling Association.

Joey Gerbes, who has two sons on the team, was cheering on the Lumberjacks' racers at the event.

"They get to compete, they're outside and bicycling is a sport they can do well into their future," he said. "With football, you don't play that when you get older. But you can always pick up a bike and ride it."

For information about the league, visit missourimtb.org. A $300 fee covers expenses for the year. The cost of the bikes can range between $300-$6,000, Smith said.