For comedy promoter Randy Dinwiddie, business is no laughing matter 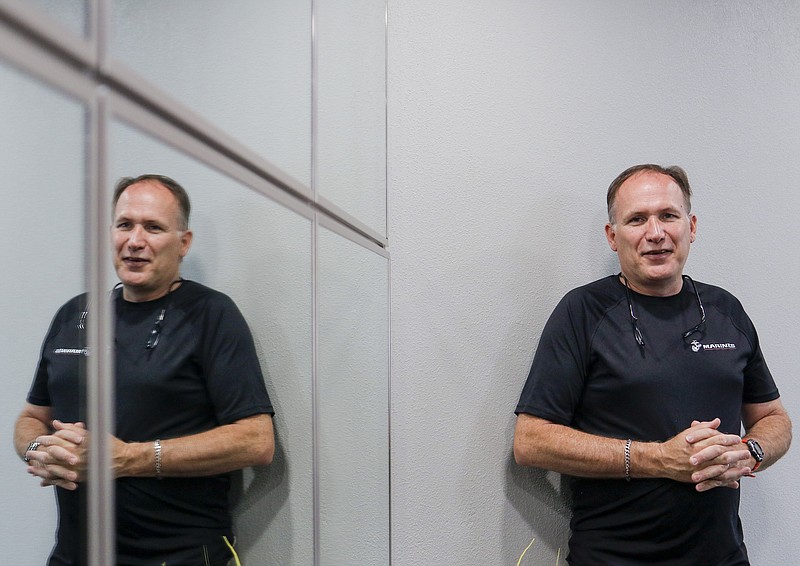 Liv Paggiarino/News Tribune Randy Dinwiddie, promotor for Laughing Class Comedy, stands outside what used to be the entrance of the R Bar, a regular venue for Laughing Class Comedy’s acts within the Baymont Inn. After ownership of the hotel changed hands, the bar eventually shut down; now, only a mirrored wall stands in place of the entrance. Dinwiddie remembers the acts at the R Bar sometimes attracting so many people that there were folks spilling out into the lobby of the hotel.

When Randy Dinwiddie dove into comedy a few years ago, he expected it, like any other business venture starting from the ground up, to come with some challenges. What he didn't expect was the sweat equity - literally.

Going door to door, he trudged through lawns and walked up sidewalks in Sedalia, Holts Summit, Eldon, Jefferson City and more, sweating out every last bit of energy in 105-degree heat for "thousands upon thousands" of house drops, hoping a poster would spark someone's interest and will them three steps left of their comfort zone.

After a year when the stage went dark and stand-up comedians were primarily left to their own devices, Laughing Class is slowly reopening, and this year, they're breaking even.

He gave himself three years.

For three years, he lost and bled.

"This year? A strike of luck," he said. "They all paid for themselves."

And if not for COVID-19 in 2020, he believes it could have been dead forever.

Started in 2017, Laughing Class is a labor of love and laughter for Dinwiddie. As an insurance agent with Reliant Brokers, he often found himself tired of sitting in an office surrounded by paperwork and bound by red tape.

"Sometimes, work can really stress you out, and it can bring you down," he said. "You get into this workaholic mode, and there just has to be a decompressor."

Not one for copious amounts of alcohol, he turned to comedy - going to stand-up comedy shows became a way to alleviate the stress of a nine-to-five. Then, his love for comedy pushed him into the promoting and booking business.

"I thought, you know, it would be awesome to be able to bring something positive to this area. I had people laugh at me. They said 'Why are you doing this in Jefferson City and the Lake? You have to do this in Columbia,'" Dinwiddie recalled. "I said, 'Well because everybody needs comedy, not just in Columbia.'"

But stepping foot into the business and getting the acts to draw crowds was another story entirely. Dinwiddie described it as speaking a different language and the "hardest part in the world."

The first acts he recalls contacting were David Graham, out of St. Louis, and Michael Joiner, who gained exposure following the 2011 film "The Grace Card," in which he starred. Graham and Joiner were set to be double headliners.

And to get them to come do shows in an area that wasn't used to stand-up comedy, Dinwiddie said, was "ridiculously expensive."

He soon realized being a promoter meant having to wear a number of hats, changing gears and "wearing out a lot of clutches, because the traffic is pretty bad on a lot of different issues," he said.

One of the places from those early days was a small bar tucked within Baymont Inn & Suites, now listed on Yelp as permanently closed. R Bar, as it was called, was a "quaint lounge" Dinwiddie refers to as "the broom closet" because it was so small.

Today, a reflective panel of mirrors spans ceiling to floor where the entrance used to be, and the lobby of Baymont is quiet.

Still, while it was still in business, the bar would fill up at just 35-40 people. Even then, "reading the audience" was a task. One show Dinwiddie recalls booking Steve Kramer, whose bio on his website says Kramer was "headlining major comedy clubs and colleges" across the U.S. just one year after launching his career.

Still, the crowd that came out was small.

"We had 18 people show up, right over there at the Capitol Plaza Hotel," Dinwiddie recalled. "(Kramer) goes, 'I've had bigger shows at my grandma's house!'"

Truthfully, at times finding what appeases the Mid-Missouri community has been challenging at best and frustrating on the far end.

Sometimes, comics are too expensive to book. Other times, the comics want to come regardless in a show of solidarity, but the crowds don't show up. Tickets can be expensive, coming in at $20-$25 for a show, or people simply don't know the comedy show is happening.

And, in a primarily conservative area, the comedy needs to be clean, clever and non-controversial. As a promoter, Dinwiddie must know what people "are capable of putting up with," and he must maintain a level of professionalism and respect on behalf of the venues hosting the act - often mid- to high-profile hotels.

As Dinwiddie puts it, "you can't be pissing on the walls everywhere - just at the ones that will allow it."

Despite the challenges, he's managed to build a portfolio of acts he can turn to. All he needs now is a loyal base of customers, 90-100 at a show, who come not only to see the act, but to support the venture.

"I created this knowing that it wasn't ever going to be a major profit thing," Dinwiddie said. "But what we've done is we've opened up a new market for entertainment that didn't exist here. And we started it from ground zero, and it was the hardest thing I think I've ever done in my entire life.

Still, he's largely optimistic the business can grow this year.

Danny Browning, a comedian out of Southern Indiana who runs his own booking business on the side, has known Dinwiddie "from the very beginning" and has seen the ups and downs he's gone through. As a comedian for almost 20 years now, he understands the industry can be fickle. It's been a roller coaster.

On his end, it's taken an ambiguous "while" to get to where he is today. He estimates he made less than $10,000 the first year on the road.

"I was definitely a starving artist," Browning laughed.

And in 2017, like Dinwiddie, he created Laughing Dad Entertainment, through which he books comedians for comedy fundraisers.

It's hard, Browning said, to get the wheels rolling, and sometimes, "it's hard to understand why." It takes years to develop an act, to create flourishing relationships with clubs and booking agencies, and built trust.

Still, when he looks at where Dinwiddie is now, he believes he should give himself more credit.

"And it's kind of the same with (Dinwiddie). He's trying to build that reputation," Browning said. "And over the years, I've seen him build it up, but probably not to where he wants but he's come a long way from when he started. I don't know if he sees that, but he has."

Persistence and a 'certain level of ignorant optimism'

From the outside looking in, it may be hard to understand why Dinwiddie hasn't quit the business. After all, he's not sure if Jefferson City is a comedy town or not, and he's suffered through a significant chunk of monetary loss (though he wouldn't impart how much).

But the hardest thing to do in this business, Dinwiddie and Browning said, is to walk away.

"Comedians will go through bankruptcy. I've seen people with flat tires try to drive on their flat tires to get to the shop to get their tires switched so they can come to a show," Dinwiddie said. "I've had all kinds of horror stories from people when they just started out, but they stuck with it and they made it. But it was hard at first."

Browning himself has multiple times thought about quitting, and he's seen Dinwiddie post on Facebook that he was done with comedy, he said.

For Dinwiddie, his reasoning goes back to square one. When he sits in his office, he's reminded of why he hasn't given up quite yet.

It's not about the money.

He recalled an older woman approaching him after a show. Her dog had just died, she shared, and she hadn't been able to do much because of COVID-19. She came out to the show and found solace in laughter.

"And she goes, 'I want to say thank you because I've never laughed so hard in my life and this is something I needed so much,'" Dinwiddie said, then added: "It's those kinds of moments that make the losses all better because you've done something to help."

Browning calls comedy "one of the more real art forms that still exists."

Dinwiddie calls it "a gift."

And, they agree sticking with the business is a labor of love.

Not surprisingly, Dinwiddie already has a few shows lined up for 2021.

The ultimate goal, he said, is to do a monthly show, but for that, he needs people to take a chance on it. Being in the business for four to five years now, he's learned a lot, though "there's still so much to learn."

And if someone is to bring comedy to Jefferson City and take ownership to make it stick, for the time being Dinwiddie is seeing promising potential. He's giving it another shot. Or two.