Grocery stores thrived during the pandemic, but what's next? 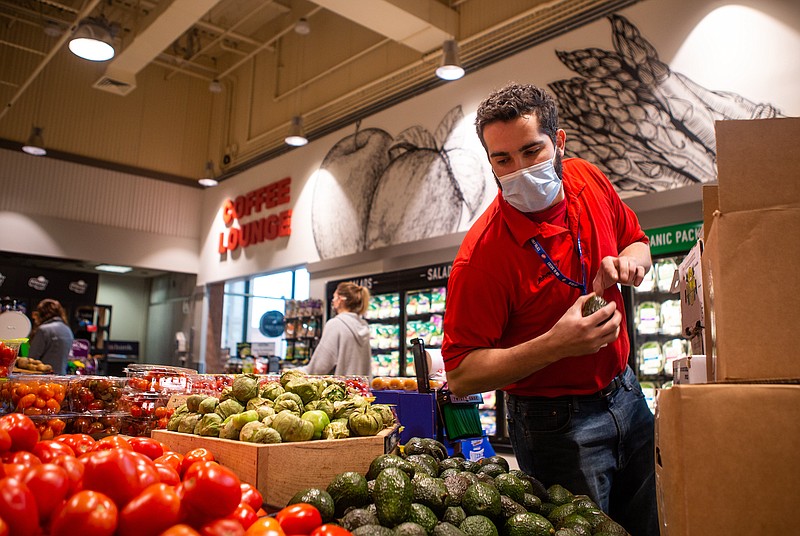 Intensifying competition from national retailers such as Walmart, online marketers such as Amazon and the increasing availability of groceries everywhere from dollar stores to drug stores was leading to the consolidation of some chains and the bankruptcy of others.

But if the coronavirus pandemic was a cloud, grocery stores were one of its silver linings.

This interpretation of the industry comes to us by way of Keith Daniels, a partner in the New York-based financial institution Carl Marks Advisors (this is a serious column, but you have to admit that a merchant banking firm called Carl Marks is hilarious).

According to Daniels, grocery stores "were one of the few areas that experienced growth last year. Grocery stores were turning up double digits (profits) compared to a year before."

Typically, grocery store profits increase by 1-2 percent each year, not much higher than the rate of population growth. But with restaurants closed or unsafe during the pandemic, people began cooking more frequently at home.

That means higher grocery store sales. And because demand was pushing hard against supply, the stores in general also took advantage of the opportunity to boost some of their prices a little, which added to their profits.

On the other hand, Daniels said, the stores also faced increased costs. They had to buy PPEs - personal protective equipment - for their employees and install Plexiglas partitions around their checkout lines. But even so, he said, profits have been healthier for grocery stores than they had been in years.

But now that the pandemic appears to be slowing, the good times for grocery stores may also be coming to an end. As people become more comfortable with the idea of eating in restaurants again, Daniels said, they may return to their pre-pandemic buying levels at the grocery store - or maybe even less.

Daniels said the grocery industry knew that their high-flying times were going to be short-lived, and that most invested some of their profits into making their stores more attractive and competitive.

Meanwhile, they still have to deal with some of the higher costs they have been facing. Grocery stores stayed open during the worst of the crisis, and some employees left because of the dangers of working there. Others became ill from COVID-19, and some died. As it became harder to hire and keep employees, the stores were forced to raise their wages.

In St. Louis, Schnucks showed its appreciation to its employees during the pandemic by giving them three bonuses in April, May and December of 2020, company spokesman Paul Simon said.

Representatives from Dierbergs, Straub's and Save A Lot did not respond to requests for information.

Some city councils, especially on the West Coast, recognized grocery store workers were risking their health and their lives to sell people the food they needed and mandated that they be given extra hazard pay of anywhere from $3-$5 per hour. This sudden cost increase hit some chains hard. Kroger, the nation's largest grocery store chain, shut down some of its stores in the affected areas, while other chains turned more toward self-checkout as a way to employ fewer people, he said.

Meanwhile, the cost of transporting food to the stores has also continued to rise. Even before the pandemic hit, trucking companies were raising their wages to attract more drivers. Then food production lines were slowed because of illness during the pandemic - meatpackers were hit especially hard - causing a backlog in supply.

International shipping slowed to a trickle, and much of the fruit and vegetables sold in the U.S. come from overseas. The freeze in Texas sent fuel prices soaring and even the ship stuck in the Suez Canal helped add to the supply bottleneck that increased costs.

Daniels sees more consolidation and bankruptcies in the grocery industry ahead. The companies that will thrive, he said, are the ones that will become large enough to compete with Walmart and Amazon, or will distinguish themselves by filling a certain niche.

Chains that boost their ethnic-food selections might do well, he suggested, or that offer specialty cheese shops or extensive meat markets.

In the near future, he sees one more trend that may benefit the stores that follow it. Just as grocery stores have been rewarded by embracing and promoting organic foods, he believes they will also do well to show that they are trying to fight climate change.

Consumers will look for stores that emphasize sustainability with recycled packaging, low-carbon emissions and no plastics. People will be willing to pay a little more if it helps save the world, he said.

Print Headline: Grocery stores thrived during the pandemic, but what&#8217;s next?