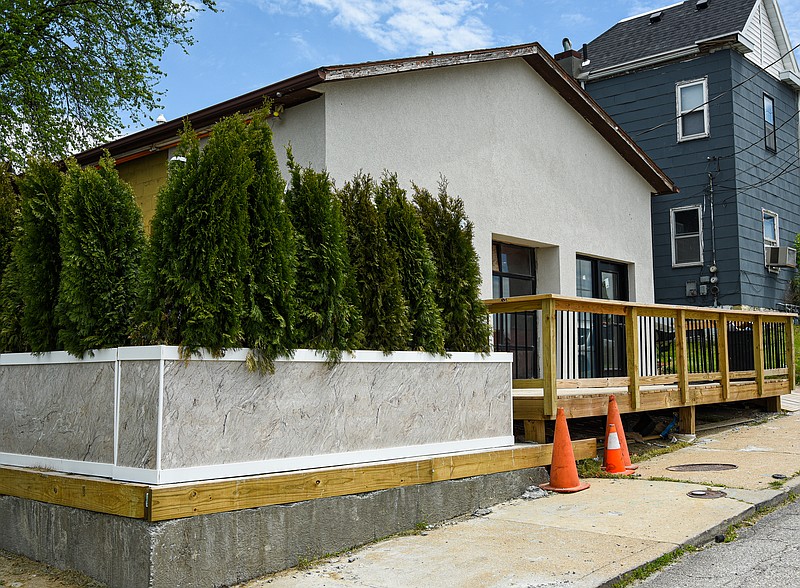 Julie Smith/News Tribune The former location of Pizza Kwik at 1121 E. Miller St. will soon be the home to Crazy Fry's.

Soon in Jefferson City, every day will be "fry-day."

At least that's the hope of business partners Theo Okuribido and Stallone Watson, owners of the soon-to-be-open Crazy Fry's at 1121 E. Miller St. The new restaurant focuses on what Okuribido referred to as "America's favorite snack" - the french fry. The entire menu is nothing but french fry-focused dishes, both sweet and savory, topped with a variety of sauces, meats and veggies.

"Crazy Fry's was born with love," Okuribido said. "We kind of really touched on this creative food and just kind of remixing flavors and combinations."

It's the result of more than one year of working on those flavor combinations, in addition to the construction on the Miller Street location. Okuribido was quick to point to Watson as the chief visionary in the business, as well as the Jefferson City connection.

Both Okuribido and Watson are from California where they had previously operated a food truck. While Okuribido lives in Los Angeles, Watson is a Mid-Missouri resident after originally coming to Jefferson City to attend Lincoln University on a track scholarship and ultimately deciding the surrounding community would be a great place to test new concepts.

"I like it here because Jefferson City to me is like an empty canvas," Watson said. "This market allows an entrepreneur like myself ... to bring ideas here and really get the opportunity to see how people respond to it."

So when the opportunity came to purchase an old restaurant, Watson jumped on it, even before knowing what he wanted to do with it. The pair began working on a concept, Okuribido said, deciding they wanted to bring something new to the area and ultimately settled on this idea of loaded fries.

"I think french fries have the talent to be about anything it wants to be," Okuribido said. "We want to bring that to the forefront and give people these great, unique flavors."

The name itself was born out of the global pandemic that caused the pair to pause progress on the new business while acknowledging the insanity of the times and the sheer willingness to start a new restaurant in a time when many were barely able to keep their doors open, Watson said.

"It was a crazy time to be in," Watson said, noting the importance of "sticking with our vision and saying that at the end of the day this too will pass and we will rise above the occasion."

The menu for the new restaurant is already available on the business' website, and it includes a tribute to the previous tenant of the Miller Street location, Pizza Kwik, which inhabited the spot for nearly 50 years before closing in 2017. The business was revived last year as a local food truck by the same family that owned the brick-and-mortar store.

Okuribido said they felt it was important to offer a tribute to a local staple and favorite, and the pizza-inspired fry dish was born.

In addition to simple food quality, the pair said they hope to provide a complete experience to those who come to the restaurant, which will offer both indoor and outdoor dining. Okuribido said they are striving to give customers an experience they won't forget with "a vibe and an energy that is unmatched."

"We wanted to bring something here that was not anywhere else," Watson said. "I think we hit the nail on the head with this one. ... I think the people are really going to love it."

Crazy Fry's has a grand opening planned for May 30. Okuribido said the restaurant is looking for new employees as well. Those interested in learning more can visit crazyfrys.com or check out the Crazy Fry's Facebook page.