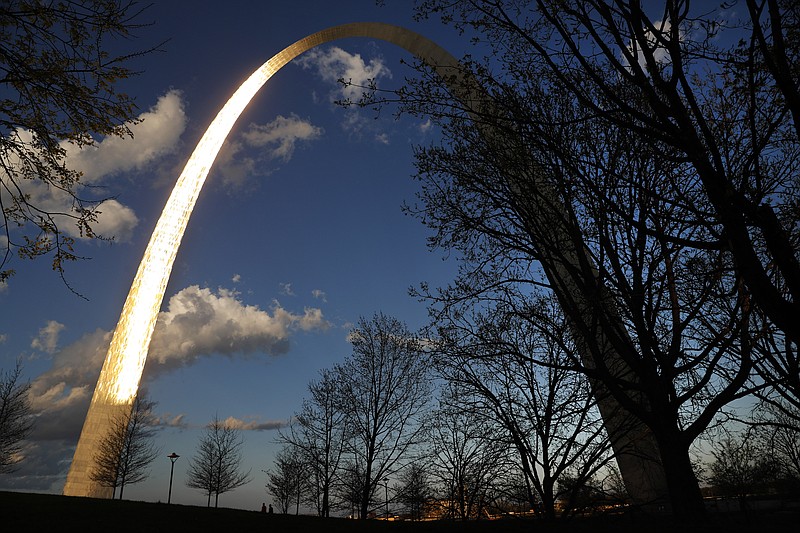 In this Tuesday, April 7, 2020 photo, the setting sun reflects off the north leg of the Gateway Arch in St. Louis. (AP Photo/Jeff Roberson)

ST. LOUIS (AP) - The Gateway Arch gradually is losing some of its silver sheen, as a variety of forces - from salt to body oils to graffiti - take a toll on the stainless steel monument to westward expansion and a symbol of St. Louis.

Now, a group of national nonprofit organizations and preservationists are suggesting ways the National Park Service could begin to clean the Arch's shiny skin, the St. Louis Post-Dispatch reported.

"This is fantastic information to have," said Pam Sanfilippo, a program manager of museum services for Gateway Arch National Park. "Planning for future needs for the park, this will definitely be front and center in our minds."

The park service investigated Arch corrosion more than a decade ago and finished a report in 2006 on the issue. But in 2015, after further study - and testing that featured people rappelling down sides of the Arch for the first time in its history, to gather samples - park officials said it was "not feasible" to pursue a full cleaning of the structure.

By 2018, however, several outside organizations, including the Los Angeles art preservation nonprofit the Getty Foundation and the Springfield, Illinois-based Association for Preservation Technology, had started their own investigation into conserving the Arch. The agencies finished their report last August. Arch officials got copies in December and held a video conference on the findings in February.

The Arch has not been fully cleaned since shortly after its completion. After its keystone was installed in the fall of 1965, "final cleaning, repair, and polishing" was done by hand, the new report says. That cleaning process lasted a full year and created some of its own visual inconsistencies: Where stabilization struts had been placed during construction needed particular attention, for instance.

The 269-page report documented preservation strategies the park service could use to "clean, possibly refinish and generally conserve" the structure's stainless steel surface.

The study examined the potential use of such wide-ranging means as drones, lasers and rappelling, in addition to the more conventional use of cleaning agents. Even gunshot residue sample kits were used to gather information from the Arch's skin.

The report builds on a handful of earlier studies completed from 2006-15. The varying analyses detail the list of threats that pose challenges to the structure.

At the ground level, things like de-icing salt have caused "superficial corrosion," the report says. Higher up, studies have pointed to atmospheric pollutants tarnishing the upper reaches of the Arch. And "many of the visual anomalies" are marks left from the monument's original construction, in which cranes and machinery had to climb the structure and anchor to it while work progressed.

Perspiration, body oils and graffiti - especially harmful when etched into the stainless steel - pose the risk of serious damage "if left unchecked," the report states.

"It's just things that you wouldn't think of, but they can build up over 56 years of time," said Sanfilippo, summarizing the many issues the Arch's exterior contends with. "You would think, 'Doesn't rain just wash it off?' Not necessarily."

Cleaning techniques examined in the report included the use of lasers, a combination of pressurized water, steam and dry ice, and manual polishing with chemical cleaning agents from Astro Pak, a California-based company.

"We're not holding our breath for that decision to be made," said Mary Cheng, an Astro Pak spokeswoman.

She said the company came away with the sense there's not great urgency to address the monument's corrosion challenges, and suggested that the park service even could be willing to wait years for technological improvements to present solutions through lasers, robotics or other advancements.

And while there's a desire to combat "premature aging" of the Arch, Cheng said some parties are reluctant to reverse the Arch's natural weathering.

Those individuals "want to keep it as organic as possible," she said. "That's the impression we got."

The report notes, however, that corrosion issues could worsen over time or with drastic atmospheric changes.

Despite the forces at play on the Arch, Sanfilippo said, "it's still amazing how reflective it is."

But if the structure eventually is cleaned, the difference might be striking - such as when a stainless steel kitchen sink gets cleaned for the first time in a while, she said.