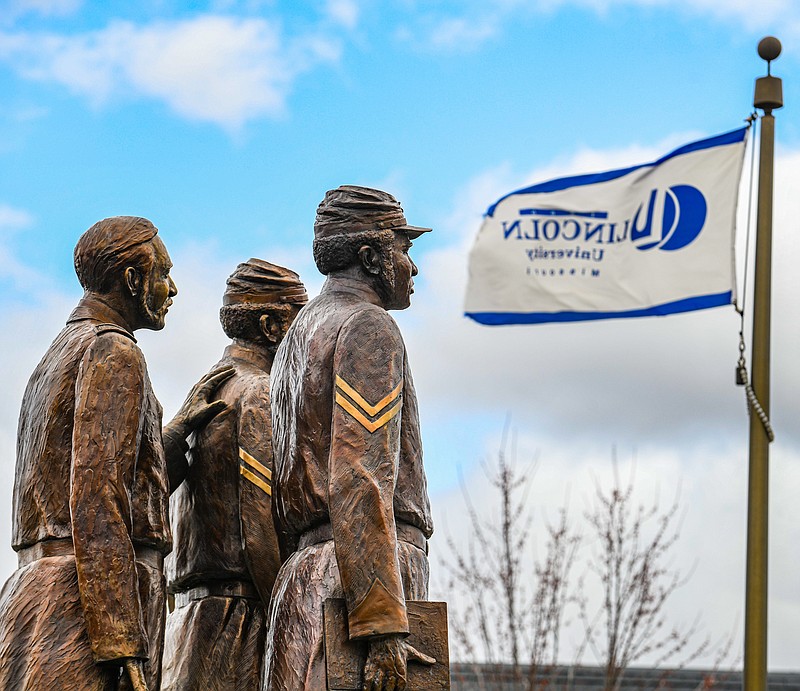 Julie Smith/News Tribune Fewer students pass by statues of the founders of Lincoln University as enrollment continues to decline at the historically black college in Jefferson City. The number of students has drastically declined in the the last decade.

As Lincoln University's enrollment continues to decline, the university is focusing its efforts on improving recruitment and retention.

Lincoln University President Jerald Jones Woolfolk said retention is a larger part of the enrollment problem than recruitment. About half of first-time students do not return their second year.

The first-year retention rate - the percentage of freshmen who returned their second year - has stayed around 50 percent since 2009, other than two outliers when it was 36 percent in 2012 and 64 percent in 2014, according to the Office of Information and Regulatory Affairs. In 2014, it increased because anybody was allowed to return, regardless of GPA.

LU Board of Curators Treasurer Richard Popp, who chairs the curators' Finance and Budget Committee, said increasing this rate significantly over time will be difficult because retention is largely a function of college readiness, and many freshmen who come to LU aren't prepared for college.

"It's going to be hard to help that a lot because of the nature of the students that we're getting," he said during a Board of Curators meeting Tuesday.

Woolfolk also said many freshmen who come to LU - an open enrollment university - are underprepared for college.

"Many of our students come here underprepared - not that they don't have the ability - they just haven't had the experience in terms of the classes they need to take in high school in order to be successful in college," Woolfolk said.

The university's six-year graduation rate has changed little over time. It has been between 20-26 percent every year except one.

One effort LU has made to improve retention is the Blue Tiger Academy that started in 2019. Students who scored 17 or below on the ACT can go through the summer program to receive one-on-one attention from mentors and tutors. Every student who went through the program had a C or above in the fall semester, Woolfolk said.

"That's the work that we have been doing in terms of making sure that students can be successful in the classroom by providing them the support that they need," she said.

These recruiters will undergo virtual training. LU is also providing training to alumni presidents so they and alumni chapters can help with recruitment efforts. Woolfolk said she hopes to hire retired or previous educators.

"Those people will all live there and be from there, and so they would know the school systems better than we do," Woolfolk said.

On-campus recruiters will focus on Mid-Missouri. LU is also providing flyers next week to Mid-Missouri students about the value of attending LU based on cost.

"We know that is a selling point for the local area," Chanay said Thursday.

LU has averaged about 350 new students a year, and that number has been fairly steady, Woolfolk said.

"We have a limited amount of scholarships and a limited number of recruiters, but still in all, we are doing pretty well in terms of recruiting," she said.

In 2019, the enrollment decline improved due to the university's recruitment efforts, Woolfolk said. Enrollment dropped only 1 percent from the year before.

In 2020, enrollment dropped by 15 percent because of the COVID-19 pandemic. Recruiters couldn't go to schools to recruit students because all schools were shut down. Now, recruiters can't go into many school buildings, so they are using virtual platforms to try to recruit students.

Nationally, there was a 6.8 percent decline of high school graduates attending college immediately after high school this past fall, according to the National Student Clearinghouse Research Center.

"It's just a challenging time right now, but we'll get through it," Woolfolk said.

As of Wednesday, 2,092 students have been accepted to LU for the fall semester out of 3,335 applicants.

However, this year's number will change as recruiters and student ambassadors call students. The goal is to have the same enrollment number this fall as last fall then increase enrollment in fall 2022, Chanay said.

"It's difficult to bring in those students if you don't have the resources to give them the scholarships to be competitive with other institutions in the area," she said.

While enrollment has dropped in most Missouri four-year universities, LU's five-year and 10-year enrollment dropped more than any other four-year public university in Missouri.

The significant annual enrollment declines over the last few years have added to the stress on the university's financial condition. In the last two years, the revenue the university receives from students has dropped by almost $5 million.

LU's revenue averages about $7,500 per student. Since enrollment declined by 324 students over the last two years, total revenue from tuition and fees declined by almost $2.5 million.

Dorm occupancy has declined greatly over the last two years, resulting in a decline of almost $2.5 million in revenue. Because of this decline, the university's general fund is now subsidizing the cash flow of the auxiliary fund, according to Popp's presentation on enrollment data during last week's Board of Curators meeting.

"This university isn't doing real well," Popp said. "We need to do something about it. We probably need to act now instead of waiting."

Because of its enrollment decline, LU received the highest state appropriation per student of all state schools, receiving more than twice as much as the University of Missouri.

LU received $8,311 per full-time equivalent undergraduate in state funding during the 2018-19 school year. In comparison, the University of Missouri received only $3,925, according to Missouri University Flagship Council.

Popp said he thinks this presents a long-term funding risk to LU because other universities can put pressure on the state Legislature to move the outliers closer to the middle.

"This points out the need to increase enrollment," he said.

From 2000-11, LU had about the same number of white students. Most of those white students lived in the Jefferson City area and commuted, Popp said.

"For the longest time, Lincoln was the school of choice for local high school students graduating and not wanting to go away to school, save some money on room and board, save money on tuition," Popp said.

Since 2011, the number of white students at LU has declined by more than 50 percent.

"That's a big deal," he said. "Lincoln has lost its ability to attract local commuter students who happened to be mostly white."

In 1995, LU's student body was 70 percent white. Over time, there has been a slow transition toward a higher percentage of Black students. This trend has increased over the last few years as white students' enrollment declines.

Popp said the university needs to figure out why there has been a decline in the Black student population to stop the trend before it continues.

The decline in the number of white first-time, full-time freshmen has been even more significant, dropping from 225 in 2010 to 48 in 2019.

More than 80 percent of LU students are from Mid-Missouri. A significant number of students also come from St. Louis and Kansas City.

"That's something also that we need to try to figure out so we can get those students coming back," Popp said.

Popp said the board needs to determine why enrollment has dropped, why not as many local students are enrolling, why Black students' enrollment suddenly dropped, and how much of the problem is external and how much the university can fix.

"We need the entire board to be on the same page and say, 'We need to do something, and we need to do it as soon as possible to change the direction of enrollment,'" he said. "Everything depends on enrollment. Everything else is secondary."

Woolfolk predicts an enrollment drop in 2025 because not as many high school students are going to college, and there are fewer high school graduates because birth rates are lower.

"I don't think that we have seen the worst of it yet," she said. "We've got to do everything we can to stay strong and increase enrollment, but it's going to be very challenging."

Woolfolk said she's committed to working through the enrollment problem.

"Lincoln will survive, and my job is to make that happen - and I'm committed to that," she said. "These are some tough times, but we've been through tough times before, and we'll get through it again."