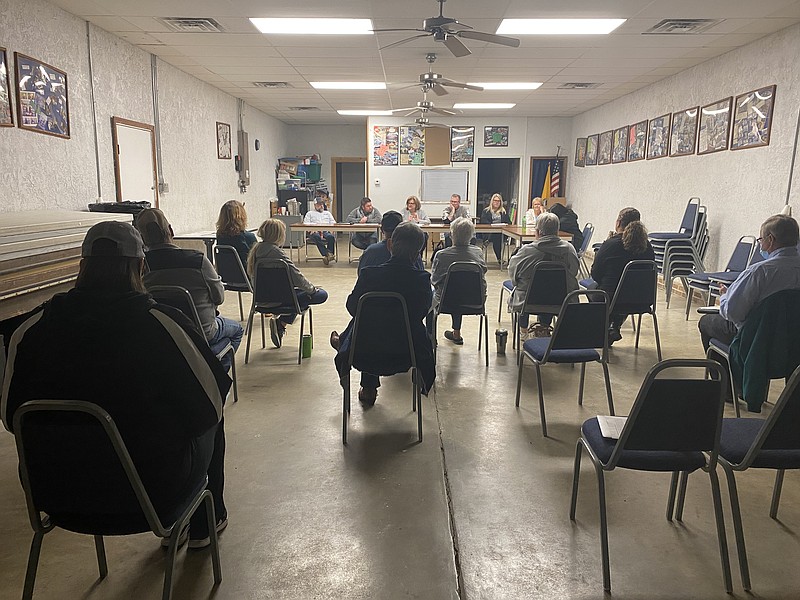 MOKANE, Mo. - A dozen Mokane residents gathered Monday night in the Lions Club Hall for a public meeting on water and sewer fees.

The Mokane Board of Aldermen will meet Friday to vote on the increases. Mokane does not have metered usage, meaning all residents pay the same rate - currently $25 per month for water and $35 per month for sewer service.

The city has worked for years to acquire the funding necessary to update its water and sewer systems - work required by the Missouri Department of Natural Resources to modernize and repair decades-old systems.

Mokane voted in June to approve a nearly $2.5 million bond issue to fund the work, and the city is now working with consultants CPWG Engineering to lay the groundwork for the projects.

Before construction can begin, the city has been told by lenders and grant agencies it must raise utility rates as an indicator it will be able to meet financial obligations. The only question left to answer Monday was by how much.

To inform this decision, CPWG Engineering conducted an updated rate study. CPWG representative Todd Chandler was on hand Monday to explain the study.

Following the vote later this week, water fees could increase by about $10 each quarter and sewer fees will go up by about $5 each quarter until October. This will bring each fee to about $55 per month for water and about $50 per month for sewer, with increases in April, July and October.

These amounts are based on 2 percent of Mokane's median household income, which was an annual income of $30,000 in 2010.

One resident at the meeting expressed discontent that rates for everyone in town would be increasing the same amount, noting that as a single man, his water usage is considerably less than that of larger families.

One major part of the city's future sewer and water plans is a switch to metered systems. Once the construction is completed and the meters are installed, the city plans to change rates again. At that point, fees will be based on usage.

Chandler said if the sewer and water work is done at the same time, both projects could be completed in the next two to three years. This is Mokane's preferred option. If the work is done one system at a time, it could take closer to five or more years.

The city will work to acquire grants and low interest loans over the next few months and years. The more financial support the city is able to secure, the lower rates will be for residents once the meters are installed.

The new rates will help pay for replaced water distribution lines, a new well house, re-piping of the well, and installation of a permanent disinfection system and customer meters.

For drinking water, this means a total overhaul with every old iron or copper pipe in town replaced with modern PVC alternatives.

"Every piece of pipe will be brand-new pipe," Chandler said.

Alderman Chad Booher said the new system would also address complaints of water pressure for residents who live at the top of hills, a complaint he said he hears frequently.

Booher and Mayor Jo Belmont also explained some of the history of the project to attendees. Many agreed the systems were old and in need of repairs. Most questions focused on the specific work that will be done and timelines.

"We are doing this for everybody," Booher said. "I live here. (The Mokane Board of Aldermen) all live here."

Chandler made a similar statement, noting Mokane is not the only place with old infrastructure in need of repairs.

"There will be some inconveniences, but it's for the benefit of everybody in the community," Chandler said.

The official rate increase vote and ordinance reading will take place at 6:30 p.m. Friday at the Lions Club Hall.