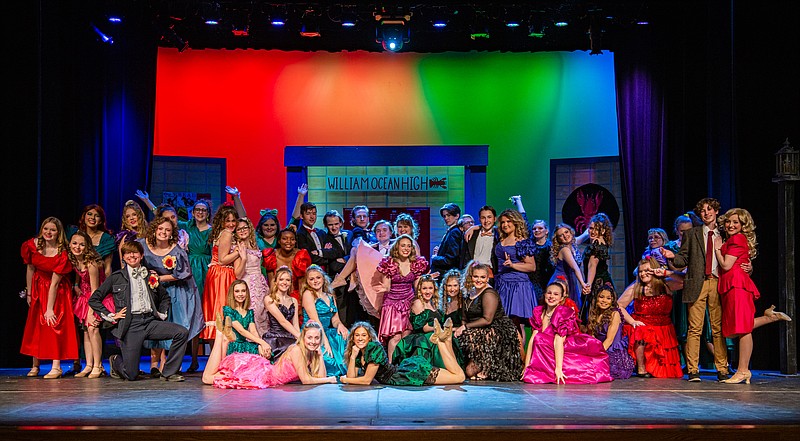 A year ago, the cast and crew of Helias High School’s spring musical were still riding a high after a successful run of “The Little Mermaid” when the rapidly spreading coronavirus closed school days later for the remainder of the year.

Director Amy Pringer wasn’t sure what 2021 would look like for her students, much less the fate of the annual spring musical, for which planning starts almost a year in advance.

Fast forward nearly 365 days, and complete with leg warmers, neon colors and plenty of hairspray, Helias students return to the Etta and Joseph Miller Performing Arts Center stage tonight with their jukebox musical performance of “Back to the 80’s: The Totally Awesome Musical.”

Unlike a traditional musical where songs are written to accompany a storyline, a jukebox musical is the opposite — a story is formed to go with well-known, popular music.

With so much uncertainty ahead, Pringer said having already familiar music at the center of the show was key to the planning process.

“Who doesn’t love the ’80s? And it’s some of the most familiar music, even with this generation,” she said. “So we decided this was probably the best way to go because we could swap soloists if we had to. It takes place in a school setting so if we had to jump somebody into a role, we could give them a book and they could kind of just read their lines if they had to.”

Luckily, Pringer said, the cast, crew, faculty and parents involved in the production have all remained healthy, and the show can go on as planned. She said they took numerous precautions throughout the rehearsal process due to COVID-19, including social distancing and mask-wearing.

“Back to the 80’s” is an upbeat comedy that pokes fun at some of the teen movies of the 1980s, Pringer said. The cast of characters features stereotypical high school cliques — jocks, nerds, cheerleaders — and the narration-based story is tied together with cheesy one-liners and plenty of pop culture references.

The music and dancing remain the real highlights, though, she said.

With popular songs of the era like “Kids in America” and “Total Eclipse of the Heart,” almost every other scene has a dance number, she said, noting the two student choreographers — senior Gabrielle Kampeter and freshman Alli Echelmeyer — began working over the summer with the help of a Helias alumna to plan the dance numbers.

“Some people thought, ‘Oh, it will just be a throw-away;’ jukebox musicals kind of feel like that since the music is already popular, but it hasn’t been,” Pringer said. “It’s actually been some of the hardest work to live up to the standards of ’80s pop culture.”

Continuing the tradition started four years ago when Pringer became director, Helias productions are almost entirely student led. In addition to the choreographers, the show has a student director, senior Kati Farr, who Pringer said has been involved in nearly every stage of the musical process — contract negotiations, setting up auditions, selecting music and even performing in the show.

Seniors Emma Jarrett and Erin Lammers along with junior Emilia Godwin serve as the show’s music directors, and the cast features 44 students with a crew of about 15 who do everything behind the scenes from planning lighting cues and dealing with mics to organizing props and scene changes.

“It’s really the best way to do it,” Pringer said about having students take the lead, “because the kids find a certain ownership to their performances and the work they put into it. Also, I find, their peers are much more receptive to learning from another peer.”

Due to a limited number of tickets being sold to allow for more social distancing, Pringer said additional performances have been added this year. The show opens at 7 p.m. tonight; other performances are 7 p.m. Friday and Saturday along with 2 p.m. matinees Saturday and Sunday.