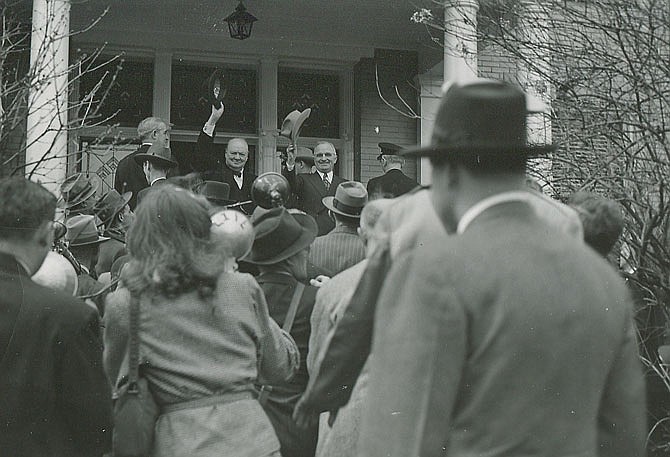 On March 5, 1946, not long after the end of World War II, Churchill gave his famous "Sinews of Peace" speech in the Westminster College Gymnasium. Westminster College President Franc McCluer had boldly asked his connections to ask President Harry Truman to convince the wartime British prime minister to accept an invitation to speak at the college.

Clayton came to town to watch the statesman pass through on his way to Westminster with her husband and brother, who had both recently come home from World War II.

Clayton wasn't one of the few who got to see Churchill speak in person, but like many others in Fulton at the time, the visit left an impression.

The speech Churchill gave in 1946 left its mark on the world - in it, he warned of the spread of Soviet influence at a time when most in the West still regarded the Soviet Union as an ally.

Because of Churchill's speech, Clayton, a Callaway County native, would get the chance to see other significant world leaders as they followed Churchill's footsteps to Westminster College.

"It means a lot for Fulton," Clayton said.

Forty years after Churchill's "Sinews of Peace" speech, former Soviet President Mikhail Gorbachev spoke from the same podium used by Churchill. Clayton was one of the thousands who witnessed the historic moment.

Gorbachev walked through "Breakthrough," a sculpture made by Churchill's granddaughter Edwina Sandys out of pieces of the Berlin Wall placed outside of the Church of St. Mary the Virgin, Aldermanbury on Westminster's campus.

In 1961, Westminster President Robert Davidson began working on a plan to commemorate the 1946 speech and visit. The college painstakingly imported a war-ravaged London church and rebuilt it piece by piece in Fulton. Beneath the church is America's National Churchill Museum.

The church, sculpture and museum have become points of pride on their own, celebrated by the local community and visitors.

In 1946, Rosemary Schryock was a student at Fulton High School. A relative of Schryock's helped arrange Churchill's travel from the United Kingdom to Fulton. She didn't trek downtown with the crowds, but she does remember standing outside her home on Seventh Street when Churchill passed.

"Everyone I knew knew it was a very important day," Schryock said.

Schryock doesn't recall much about the Churchill's visit, but she does know it was an important moment for Fulton. Schryock has been to the museum, and several of her family members have gotten married at St. Mary the Virgin, Aldermanbury.

Recollections from the 50th anniversary

In 1996, the Kingdom of Callaway Historical Society gathered to remember the visit. At the time, many more witnesses to the speech and the visit were still living. Barbara Huddleston recorded the discussion on a cassette tape recorder.

"It's April 27, 1996 - it's the Kingdom of Callaway Historical Society meeting. The program is Reminiscing Churchill Day, March 5, 1946," Huddleston explains at the beginning of the tapes.

The society gathered local switchboard operators to discuss the frenzy of the visit, but the conversation moved beyond that scope as attendees shared their own recollections.

"I first heard about Winston Churchill's approaching visit one day at a chapel service right before the Christmas holidays," Esther Randolph said. "Dr. McCluer, the president at that time, asked the faculty to remain a little while after the chapel service. At that time, he announced the upcoming visit of Mr. Churchill. We all, of course, gasped."

John Jameson, of the Churchill Day parade committee, told the 1996 crowd that "parade" might not have been the right word to describe Churchill's journey through town.

"I always get a kick out of it," Jameson said. "There wasn't any parade at all, it was an armed escort."

Churchill rode with Truman from Washington, D.C., to Jefferson City by train. There, they drove up U.S. 54 to Fulton. In town, marching bands stood stationary and played as the convoy of secret service, armored cars and the Missouri Highway Patrol passed and onlookers from the country lined the streets.

Jameson wore his nicest suit, which was made of flannel. It was such a hot day that Jameson quickly slipped away after the parade to listen to the speech in his home.

"I remember a remark he made that the ham he had eaten was the world's greatest," an attendee of a luncheon Churchill attended with Westminster faculty remarked.

Randolph was Westminster's first female faculty member and the only woman on staff in 1946.

As a woman, Randolph wasn't invited to the luncheon - it was suggested she would be more comfortable eating with other ladies.

Randolph wore her cap and gown with the other faculty several rows from the front of the gymnasium were Churchill spoke of the iron curtain.

"I don't remember myself, as a number of other folks were at this point, concerned with Mr. Churchill's main message," Randolph said. "Because, at that particular point of history, we hadn't quite become fully aware of the degree to which Mr. Stalin - the direction in which he was moving Russia. We had been so sympathetic with the Russian people."

It wasn't long before Randolph, and everyone else, realized a new conflict, the Cold War, had begun.

"From Stettin in the Baltic to Trieste in the Adriatic, an iron curtain has descended across the Continent," Churchill said in Fulton. "Behind that line lie all the capitals of the ancient states of Central and Eastern Europe. Warsaw, Berlin, Prague, Vienna, Budapest, Belgrade, Bucharest and Sofia, all these famous cities and the populations around them lie in what I must call the Soviet sphere, and all are subject in one form or another, not only to Soviet influence but to a very high and, in many cases, increasing measure of control from Moscow."

The COVID-19 pandemic has spoiled any chance of large, in-person celebrations in 2021. But, the speech will not go unmarked. The historical society has decorated the windows of its Court Street museum with pictures and materials from the visit.

Today and Saturday, the National Churchill Museum will livestream numerous anniversary events including a keynote speech by George Will, a discussion with the grandchildren of Truman and Churchill, and a panel discussion on the speech and national and international security.

It will also premiere a documentary about the museum's Churchill statue and celebrate a new virtual exhibit on a draft of the speech.