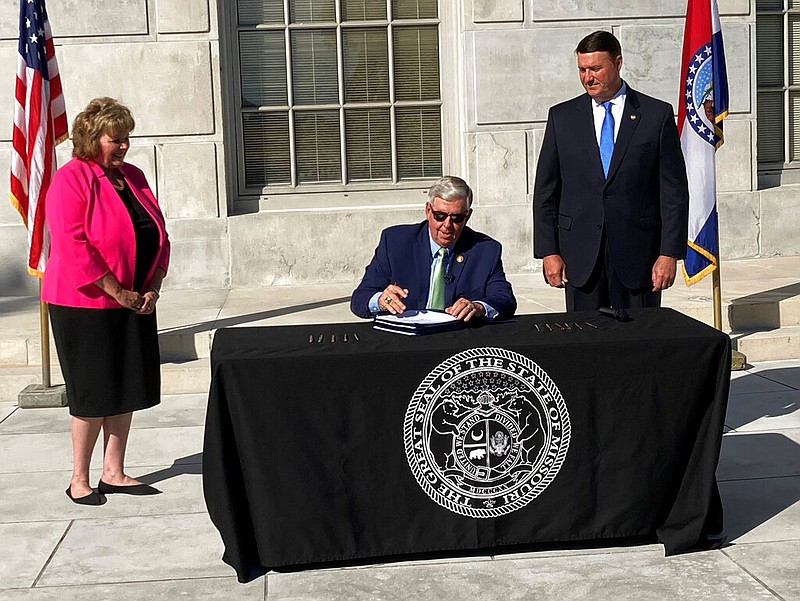 Missouri Gov. Mike Parson signs legislation limiting the during of local public health orders during a ceremony Tuesday, June 15, 2021, outside the state Capitol in Jefferson City, Mo. The new law took effect immediately and was passed in response to local restrictions imposed during the coronavirus pandemic. Among its supporters were state Sen. Sandy Crawford, left, and House Speaker Pro Tem John Wiemann. (AP Photo/David A. Lieb)

Missouri's governor and attorney general are maintaining their stance on new state gun legislation despite criticism from the U.S. Justice Department.

Gov. Mike Parson and Attorney General Eric Schmitt sent a letter to the U.S. Justice Department Thursday in response to a warning that Missouri's Second Amendment Preservation Act - which declares Missouri will not enforce federal laws that restrict or ban the manufacture, ownership or use of firearms in the state - cannot ignore federal law.

Brian Boynton, an acting assistant attorney general in the Justice Department, wrote to Missouri officials Wednesday that the Constitution's Supremacy Clause overrides the legislation Parson signed into law June 12 and that the Second Amendment Preservation Act threatens to disrupt the working relationship between federal and local law enforcement, noting that the state receives federal grants and technical assistance. He asked for clarification on the law by Friday.

The St. Louis Post-Dispatch reported prosecutors in Missouri's Attorney General's Office - who were working with federal prosecutors as part of the Safer Streets initiative - have already withdrawn from nearly two dozen federal drug, gun and carjacking cases in St. Louis.

Parson and Schmitt's seven-page response letter relies on the Second and Tenth Amendments, claiming that Missouri has a constitutional right to bear arms and place limitations on what state and local officials can do.

"Our letter to Biden's Department of Justice sends a clear message: we will fight any attempts from the federal government to encroach on the Second Amendment rights of law-abiding citizens," Schmitt said in a news release.

Parson said the law is intended to protect Missourians from unconstitutional federal mandates.

"We will reject any attempt by the federal government to circumvent the fundamental right Missourians have to keep and bear arms to protect themselves and their property," Parson said. "Throughout my career, I have always stood for the Constitution and our Second Amendment rights, and that will not change today or any day."

The letter states that Missouri is not attempting to nullify federal laws, but instead guard against federal overreach by prohibiting state and local law enforcement from carrying out federal legislation aimed at the Second Amendment.

The letter also draws a comparison to the lack of enforcement of federal immigration laws in sanctuary cities around the United States, stating the Biden administration cannot support those actions and not the Second Amendment Preservation Act.

"We will fight tooth and nail to defend the right to keep and bear arms protected by the Second Amendment, Article I, § 23 of the Missouri Constitution and the Second Amendment Preservation Act," the letter concludes. "And we will not tolerate any attempt by the federal government to deprive Missourians of this critical civil right."

State Sen. Eric Burlison, R-Battlefield, is the Missouri lawmaker responsible for the legislation and said the letter from the Department of Justice is disappointing, and is, at worst, a veiled threat.

Burlison said he was prepared for a challenge from the federal government, so the language in the bill was drafted by constitutional lawyers.

Burlison said the bill speaks for itself and the Department of Justice should take time to read and process it before taking action.