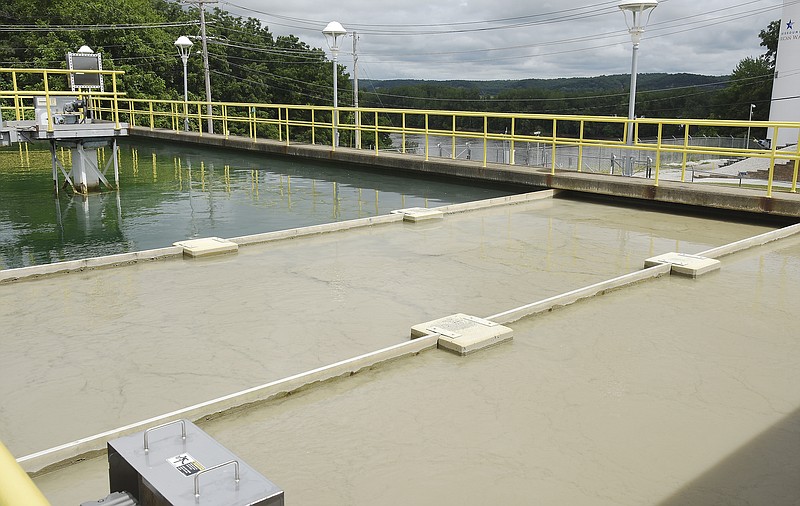 Missouri American Water's Jefferson City water treatment facility, on average, treats between 3.5 to 5 million gallons of water per day for residents and businesses to be able to turn a faucet handle and clean, safe water pour from it. (Julie Smith/News Tribune File Photo July 2019)

As the U.S. Army Corps of Engineers tells water providers along the Missouri River to prepare for lower levels during the next several months, the water provider for most of Jefferson City is not expecting any issues with providing service.

Last week, John Remus, chief of Missouri River Basin Water Management Division, sent a letter to intake owners and water users on the lower Missouri River about conditions in the upper river basin and how this will likely affect the operation of the river's reservoir system during the winter. The letter was sent so organizations would have adequate time to make necessary intake modifications and or develop contingency plans to maintain access to the water.

"A large portion of the upper basin is experiencing severe to extreme drought," Remus wrote. "These conditions are forecast to remain or worsen over the coming months. The long-range climate outlook indicates a higher likelihood of warmer-than-normal and drier-than-normal conditions for most of the river basin particularly the upper basin."

Remus noted, as is outlined in the river's master manual, the two primary drought conservation measures the Corps takes are reduced support for navigation by reduced releases and or a shortened navigation season length, or minimum winter releases.

"Our reservoir regulation studies indicate that the winter release from Gavins Point Dam (in South Dakota) in 2021-2022 will likely be 12,000 cubic feet per second," Remus wrote. "During extended drought periods, non-navigation, open-water releases from Gavins Point can be as low as 9,000 cfs.

"While the Corps does try to operate the system to meet the water supply requirements of the lower basin to the extent reasonably possible, ultimately, intake access problems are the responsibility of the individual intake owner, as noted multiple times in the master manual," Remus continued. "The Corps cannot guarantee access; we can only regulate the system to ensure that the volume of water in the Missouri River is adequate for down stream water supply needs."

In 2011, Missouri American Water put a new 12.5 million-gallon-per-day water intake pipeline and pumping station online, which was built on the banks of the river.

This system is 30 feet deeper and extends 80 feet farther into the river than the system installed in the 1960s.

Company officials said, thanks to this system, they had no problems providing service in February when an ice jam about 5 miles upstream from the Missouri River bridge at Jefferson City brought river levels to near record lows for that time of the year.

"We are currently evaluating the information from the U.S. Army Corps of Engineers and will continue to monitor the river conditions," Missouri American spokesperson Samantha Williams added.

As of Wednesday afternoon, the river forecast from the National Weather Service in St. Louis showed the river was at just less than 10 feet. It was predicted to fall to 8 feet by Sunday. The next chance of precipitation in the NWS forecast is Monday, but it is only at 40 percent.

"I understand the importance of the Missouri River in providing water supply to citizens in the lower basin," Remus wrote. "These conservation measures are critical in ensuring that the system can be operated for the future benefit of all stakeholders in the basin, should the drought continue."