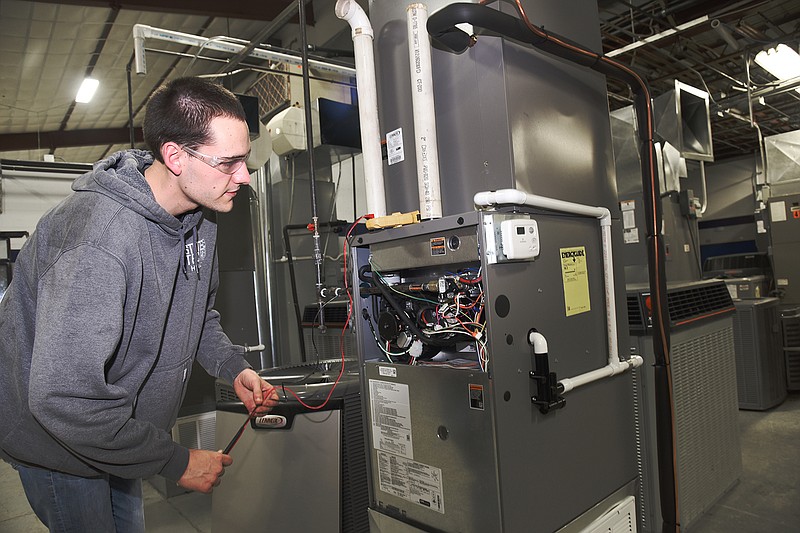 Justin Kleinheider of Washington, Missouri, inspects a furnace to see why the unit does not kick on when the temperature on the thermostat is increased.

As the workforce and job market shift, the Missouri Department of Higher Education and Workforce Development is looking to create a strategic plan to adapt.

The department has started revamping its strategic plan. The Coordinating Board for Higher Education hosted a kickoff and retreat with analysis of priorities, strengths, weaknesses and opportunities Tuesday.

The department's current strategic plan was created in 2015.

Tuesday's retreat included presentations from a variety of invested groups, including Zora Mulligan, commissioner of higher education at the Missouri Department of Higher Education and Workforce Development; Kayla Hahn, policy director for the Governor's Office; and Dan Mehan, president and CEO of the Missouri Chamber of Commerce and Industry.

"We've made slow progress, but one of the things we've learned is there are a lot of numbers that go into a rate change," Mulligan said. "So even though there are lots of positive indicators in terms of improvement on completion rates and retention rates, it is hard to move a whole population."

Sixty-five percent of jobs in Missouri will require some level of training or education beyond high school by 2028, according to the Missouri Economic Research and Information Center. The most common education level in the state, however, is high school graduates without a college degree, making up 52 percent of the workforce. About one-third of the Missouri workforce has a college degree.

Mulligan said setting goals is an important part of the strategic planning process and the department should be looking at whether it is necessary to change the date or metrics of some goals, such as moving the big goal to 65 percent of Missouri workers having a degree or certificate by 2030.

"I think the opportunities really appear to be focusing on increased access and success in short-term credential programs and apprenticeships, specifically designed to appeal to that some-college-no-degree population," Mulligan said. "So really thinking about how to reach adults."

"That provides an interesting surmise about the credentials that are of value in the workforce," Gielazauskas said. "There are definitely an increasing number of people who are interested in that certificate category."

Additional opportunities for the department to invest in, Mulligan said, include bringing more diversity in age and race to postsecondary programs and having more engagement with Missouri Job Centers.

The department is working around some obstacles, such as limited higher education funding, lack of broadband internet access in some parts of the state, declining workforce participation, skilled workforce shortages, declining college enrollment trends, and increasing job automation.

The department has also outlined some strengths, however, that should help in achieving its goals.

Mulligan said strengths include lawmakers' support for investing in higher education; a national and statewide network of connections with nonprofits, colleges and universities, employers and organizations; a recovering job market after COVID-19; and favorable degree and apprenticeship completion rates.

According to the strategic planning timeline, the department will gather information for the next two months, process information and plans from September to November, then present the final plan to the Coordinating Board for Higher Education for approval in December.