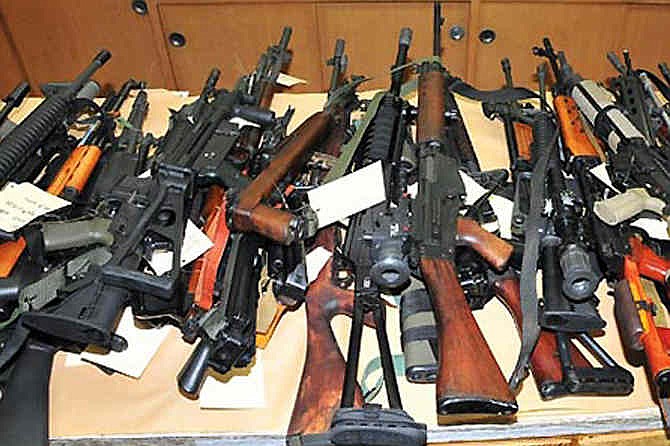 This image released by the Fresno County Sheriff via KMPH-TV shows guns seized from Christopher Haga, who was arrested is Sept. 2011 after police found this stash of assault rifles. Haga reportedly offered legal help from the National Rifle Association. The NRA has taken on California and other states over their strict requirements on who can carry concealed weapons and cities like San Francisco over their bans of high-capacity magazines. Their multi-million legal campaign has had mixed success so far, but the NRA appeals its losses, publicizes its wins and decides where to fight next.

Under the bill, Missouri agencies that knowingly enforce any federal gun laws could be sued and fined $50,000 per violating officer.

"I was concerned with the first version of the bill because there were a lot of issues with it, and some of them were huge," Cole County Sheriff John Wheeler told the News Tribune. "With any new bill, there are some unforeseen consequences that we could not support. It is still not a perfect bill, but in the end, the sheriffs were able to work with legislators and fix the language in a manner that we could support it."

Wheeler and Callaway County Sheriff Clay Chism, along with Audrain County Sheriff Matt Oller, worked with members of the state Senate on a final version of the act that made it through the Legislature and on to the governor.

Republican lawmakers who worked to pass the bill have said they're motivated by the possibility of new federal gun restrictions under Democratic President Joe Biden and the Democratic-led U.S. House.

But Democrats warned the measure unconstitutionally seeks to supersede federal laws and predicted it would be shot down by the courts.

"The new law even allows criminals who violate federal gun law to sue our local law enforcement officers for a minimum $50,000 fine if they in any way assist with federal investigations," Quade said. "It quite literally defunds the police and gives that taxpayer money to convicted criminals."

"Contrary to some political and dishonest rhetoric that was disseminated, most Missouri sheriffs, including myself, wholeheartedly support the Second Amendment," Callaway County Sheriff Clay Chism said. "It was paramount, though, to ensure SAPA was passed to protect law-abiding citizens and not give refuge to criminals who need prosecuted for their bad acts."

The Republican-led Legislature passed a similar bill in 2013 declaring any federal policies that "infringe on the people's right to keep and bear arms" shall be invalid in Missouri. It would have allowed state misdemeanor charges to be brought against federal authorities who attempted to enforce those laws or anyone who published the identity of a gun owner.

That bill was vetoed by then-Gov. Jay Nixon, a Democrat. The Legislature fell just shy of overriding Nixon's veto.

News Tribune reporter Jeff Haldiman and the Associated Press contributed to this article.