State, employers explore new paths to get Missourians back to work 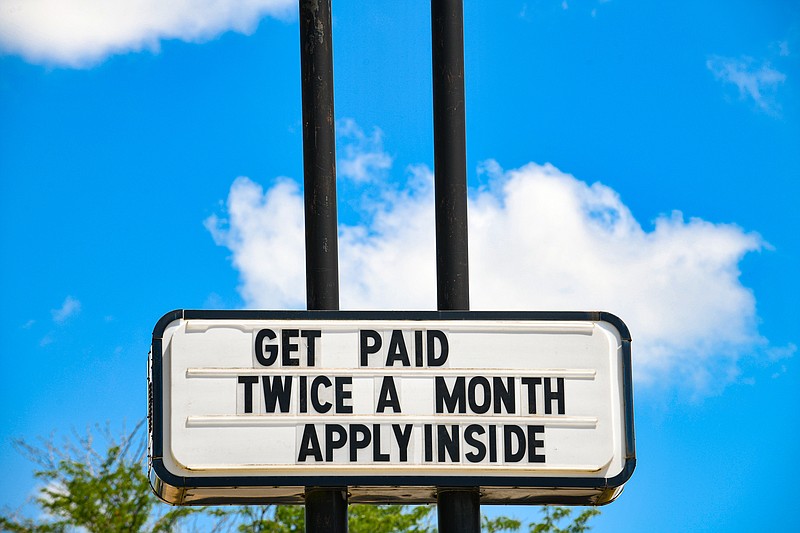 As Missouri climbs out of the major unemployment spike created by the COVID-19 pandemic, the state and some of its major employers are looking at how best to engage with a shifting workforce.

COVID-19 caused unprecedented unemployment jumps in Missouri. A year later, the state, as well as some of its major employers, are looking at how to get more Missourians back to work and assessing those barriers to employment.

The pandemic caused a severe downturn in the state's economic conditions in April 2020 as the largest one-month and one-year employment decreases were recorded since the current data series began in 1990, according to monthly job reports from MERIC.

Since April 2020, the state has seen an overall unemployment decrease of 8.4 percent, employing 335,941 more individuals than last year.

Unemployment numbers for May 2021 will be released Wednesday.

"From conversations with business owners across the state, we know that they are struggling not because of COVID-19 but because of labor shortages resulting from these excessive federal unemployment programs," Parson said. "While these benefits provided supplementary financial assistance during the height of COVID-19, they were intended to be temporary, and their continuation has instead worsened the workforce issues we are facing.

"It's time that we end these programs that have ultimately incentivized people to stay out of the workforce," he said.

Jessica Duren, assistant commissioner for communications and outreach at the Missouri Department of Higher Education and Workforce Development, said it's too early to tell if the state's withdrawal from federal unemployment benefits will affect the state's employment landscape, but the department assumes traffic to Missouri Job Centers will pick up in the coming weeks as more people are taken off benefits.

According to Workforce Development's Real Time Market Summary - which tracks job postings, top industries and top employers from January through March 2021 - the health care and social assistance industry is the largest industry in Missouri, making up 30 percent of the state's employment. Retail trade is the second-largest at 11 percent, and food service/accommodation and manufacturing are tied for third at 9 percent.

The Real Time Market Summary notes 174,382 job postings were created from January through March of this year.

In an effort to understand hiring trends, workforce initiatives and barriers to expanding employment, as well as the effect of COVID-19 on those areas, MERIC surveyed nearly 700 Missouri companies from July through September 2020.

The largest barrier to employment, according to the Employer Survey Report, remains a shortage of workers with necessary knowledge or skills. The second-highest barrier was COVID-19-related issues, with one in four employers recognizing it as an obstacle. Other barriers to expanding employment include economic conditions, lack of child care access and lack of transportation access.

The Missouri Department of Higher Education and Workforce Development has hosted a series of virtual job fairs focused on general employment and targeted industries in an effort to address unemployment.

So far this year, the state has hosted 10 Return Strong Virtual Job Fairs and added an additional fair June 22. Five of the fairs provided opportunities from statewide employers of all industries, one has focused on manufacturing, one focused on information technology, one on state government and two have been health care specific. The June 22 fair is also health care-specific.

Participation at the virtual job fairs tends to vary, Duren said. The largest event with more than 2,000 job seekers was in February. She said most average between 200-500 participants. The latest fair, hosted Thursday, attracted 102 employers and 1,024 job seekers who were registered the night before.

Last week's fair was focused on part-time and remote work opportunities around the state. Duren said the specialized fair was an event the department thought could benefit job seekers and employers.

"(June 8's) job fair, we had over 1,000 job seekers signed up, which is more than some of our other fairs that we've done," she said. "So I think people are looking for these options."

Duren said the popularity of working remotely could be a result of the COVID-19 pandemic.

"Everybody had to pivot quickly and try to do things from home, and now maybe, employers are realizing that that does work," she said.

She said it is unclear if participation in the state's virtual job fairs was affected by the withdrawal from federal unemployment benefits.

Duren said the virtual job fairs can be used to address needs within the workforce. The final virtual job fair June 22, for example, was requested by the health care community.

While the Missouri Job Centers are primarily responsible for connecting employers with job seekers, Workforce Development started the Return Strong Virtual Job Fairs in May 2020 for a more concentrated effort amid the economic fallout of the COVID-19 pandemic.

Duren said the department has seen many job openings around the state in the last few months and is expecting more job seekers to make contact to fill those positions.

"There are a lot of jobs out there for those people who are looking for jobs," she said. "We are trying to connect job seekers through these virtual job fairs, but also, as the COVID vaccine has become more widely available, our job centers are going back to in-person events."

Many state government departments are also looking to hire. In addition to the state of Missouri job fair hosted in February, Duren said several other state agencies - such as the Department of Mental Health and Department of Corrections - had specific hiring events and are regularly part of the virtual job fairs.

Betty Jo Rocchio, senior vice president and chief nursing officer at Mercy Health, said the state's third-largest employer has noticed a 10-year nurse shortage that was only made worse by the pandemic.

"There was a big gap in being able to serve our community in some locations," she said. "In this case, there were people that just couldn't get better, so there was more death and dying than we had in the past. That took its toll. It wasn't so much that nurses weren't used to seeing death and dying; we didn't see it at the rate that we saw during COVID. That created a good bit of moral distress for nurses."

To accommodate the lack of nurses following the pandemic, Rocchio said Mercy is making an effort to ensure nurses are doing tasks required by the Board of Nursing and unlicensed personnel take care of other responsibilities, like some bedside care.

"Everybody is heading towards that because we're not going to be able to get nurses fast enough if we continue to work in the care models we're working in today," she said.

Rocchio said nursing standards began requiring more training 12 years ago, which, in a college setting, is more time and more money required of prospective nurses. That could have turned some of the workforce away.

Following the pandemic, employer flexibility is a priority among the nursing workforce, she said. With more nurses asking for flexibility in scheduling, she said, Mercy likely will have fewer people employed full time and more working on a flexible schedule.

"I think you're going to see more flexibility built into the workforce, and nurses are going to get it because we need them," Rocchio said. "We've got to figure this out together with them because it's really about a partnership about what they need and what we need to keep our patients safe and keep delivering care."

Mercy is working on a flexible model for nursing students by implementing a program called Earn to Learn, in which students can be paid for clinical work in exchange for time working as unlicensed personnel in Mercy locations. Rocchio said this allows nursing students to be paid for learning instead of working elsewhere to support their education. The program begins next fall at Missouri State University and Southwest Baptist University.

"We're starting to adjust our onboarding practices and the way we deliver care based on what the nursing schools are doing - it's really a partnership between us and the nursing schools," she said. "We're going to have to get tighter in that, by the way. If we want to solve this, the real way is to make sure academics and partners like big health systems are working together on the solution not separate."

Print Headline: State, employers explore new paths to get Missourians back to work