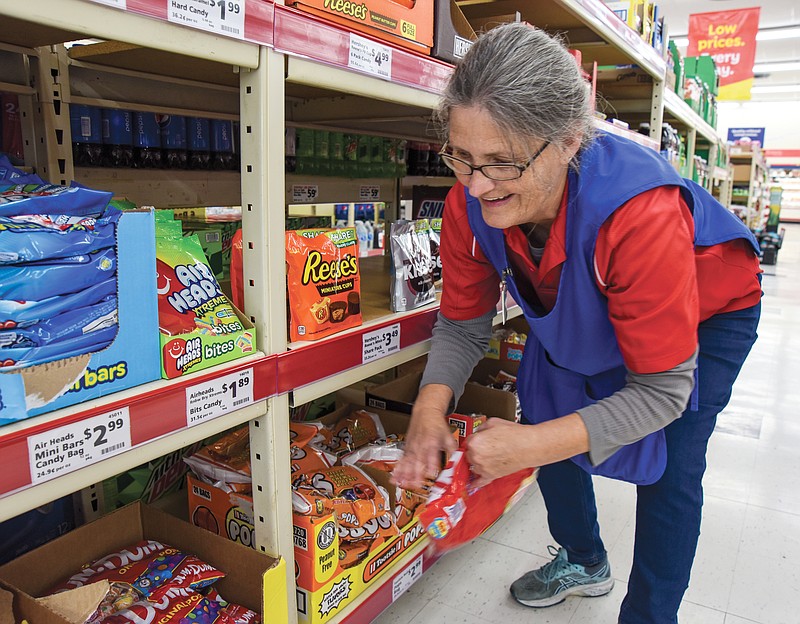 Becky Timberlake straightens items in the candy aisle at Save a Lot on Jefferson City's east side. The store has stocked large bags of candy for Halloween in hopes that despite COVID-19, children will still be able to go trick-or-treating.

Average salaries for Missouri workers rose nearly 7 percent statewide between 2019-20 to just over $54,000 a year, a report from the state's Economic Research and Information Center shows.

The center's data reflected growth in nearly every Missouri county, and Mid-Missouri counties were fairly high up the list: Callaway County had the ninth-highest average annual wage at $48,683; Cole County was 14th at $45,973; Moniteau County was 32nd at $40,249, and Osage County was 37th at $39,783.

Callaway County moved up one spot in the 2020 rankings compared to 2019, while Cole County fell one slot. Moniteau and Osage counties, however, had some of the largest upward movements in the state, climbing 13 and 10 spots, respectively.

Gary Plummer, CEO and president of the Jefferson City Area Chamber of Commerce, offered a couple of theories behind the region's strong placements.

"Number one, we have state government's presence in our (metropolitan statistical area, which) is definitely a big factor," he said. "And then the state held their own, didn't do any layoffs.

"Also, our manufacturing base has been pretty steady as well. Right now, their growth is strong, and their probably chief concern is finding workers to fill some of the jobs that they need to continue that growth."

"At the end of the day, that helped keep the employees working," she said.

Part of the statewide increase in average wages could reflect a labor shortage. That's why Gov. Mike Parson said he was ending federal pandemic-related unemployment benefits in the state, effective Saturday.

Because of the shortage, the trend of increases could likely continue - and the pace of growth could pick up, too.

"The more competitive it is to find people, probably the more pressure that puts on pay rates. That's just kind of a natural economic fact," Plummer said. "So, yeah: If you're in the position that we are where we have more job openings than we have job candidates, you're probably going to see this trend continue in our area for a while."

In Callaway County, Tateosian said more than just money will be in play to keep employees.

"You see (job postings due to the shortage) on billboards and everything every single day," she said. "Money is important, too, but job satisfaction is really important. We have a lot of really great owners and companies here in our community that they just make it a great place to work."

As is typical, counties in the Kansas City and St. Louis regions placed at the top of the average annual wage rankings. Of the counties outside those areas, only Boone and Buchanan counties ranked higher than Callaway.

At the bottom of the list were Worth County - on the Iowa border in northwestern Missouri - and Ripley County - on the Arkansas border just west of the Bootheel. Both had average annual wages below $28,000.

Full 2020 data can be viewed at meric.mo.gov/data/county-average-wages.