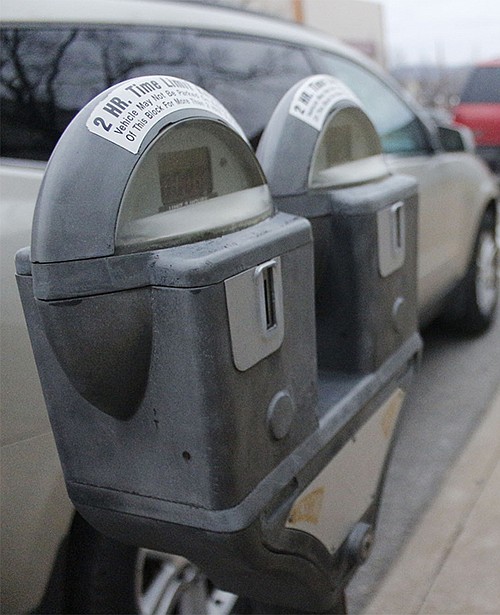 The first step? Explaining what the current system is.

Officers check parking by entering license plate numbers into an app. They go through each area with time-limited parking on a rotation during those times.

For instance, if a meter officer goes through an area with 90-minute parking at 8 a.m., the officer would go through it again around 9:30 a.m.

If the same license plate comes up in the same parking zone during successive trips, the app gives the officer the option to write a ticket, Smith said.

Only the information for those who receive tickets is kept. Otherwise, it is disregarded at the end of each day, he said.

The Public Works Department didn't recommend any changes to this code or policy Thursday, but wanted to provide City Council members with information about the current policy.

The City Council is set to make a decision at its June 21 meeting about a potential second downtown parking garage. The proposal would include the purchase of two pieces of property on West McCarty Street between Washington and Jefferson streets to construct a four-level parking garage.

Whether or not the council approves the proposed garage, Public Works Director Matt Morasch said the department needs to do an allocation and parking rates study. This would focus on where parking is compared to where it is needed as well as discuss if the cost of meter or leased parking spaces should be adjusted.

For instance, Smith said, the city offers 90-minute parking on Madison Street. The goal when that was put in place was to keep people coming into downtown rather than taking up a spot all day.

The study would look at whether 90 minutes is still the right time limit for the area.

It would also consider the 15-minute zone around the post office on High Street and other limited-parking areas.

Parking is viewed as a service industry by the city. Smith said that philosophy came from interpretation from previous city councils since parking allows business to thrive, which then generates more sales tax revenue and jobs.

"If we were simply profit-driven, we would maximize our long-term parking and incentivize it as close to where the biggest parking generator was, and run it that way," he said. "But that would then, in turn, cause the businesses to fail because they would have no parking available to them, and then the general revenue would be hurt."

"We have more demand than we have supply in certain areas of the city," Fitzwater said. "Typical business format, you've got to generate the revenue if you're going to meet the demands. We have businesses coming to us and saying, 'We don't have enough parking.' We're wrestling with how we're going to pay to build new parking."

City Administrator Steve Crowell said a rate increase has always been part of the discussion, but city staff needs to know what's going on with the new garage and rehabilitation of the old one before going into that.

The city's last rate increase was in 2005, Morasch said.

The city has looked into upgraded meters where people could pay using smartphones, but that becomes complicated because, at the current rate for metered parking, the city wouldn't see that money, Smith said.

"We've shied away from that in the past because at a quarter an hour for a meter, the vendor that's going to bring us that electronic meter takes that quarter," he said. "And so all we would be doing is funding an app company in San Francisco but we wanted those fees to stay here in our community."

Discussions of downtown parking likely will continue for some time.

An allocations and rates study would take about a year, Morasch said. That process has not begun.