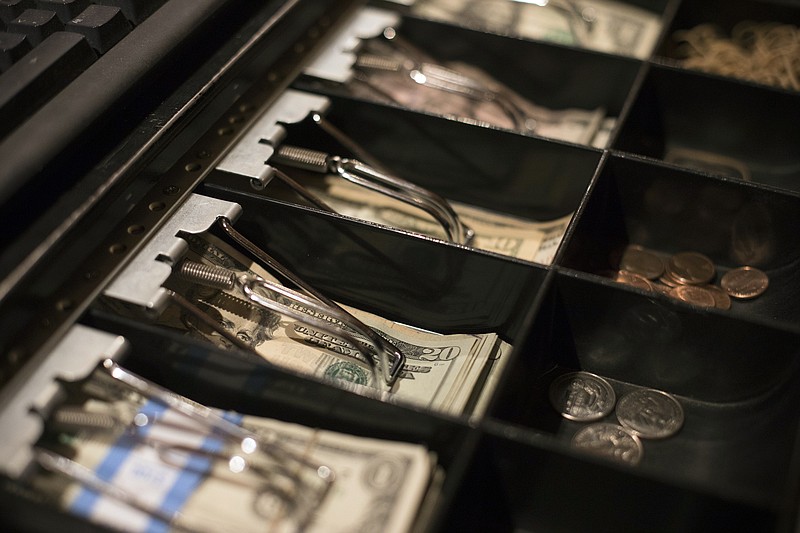 This Dec. 25, 2018, photo shows twenty dollar bills in a register at a business in Eagle, Colo. While many business owners know they’ll owe the government less money or perhaps get refunds under the new tax law, others are still unsure about what they might have to pay while they file their returns. They need to be sure they have some extra cash, or access to financing, in case they’re facing sizeable tax bills.(AP Photo/Jenny Kane)

While Missouri's revenue picture is doing better than expected, the 128 percent increase in general revenues reported for May is simply an aberration due to an additional income tax due date this year, the state's budget director said.

The Missouri Department of Revenue provided a 90-day extension to the income tax due date in March 2020, and then provided another extension in March 2021 in response to the pandemic.

Dan Haug, budget director at the Office of Administration, said changing the income tax due date from April 15 to July 15 last year skewed revenue collections because more money was collected in the current fiscal year than last fiscal year. The issue was compounded in May especially, Haug said, because the income tax due date was moved from April 15 to May 17 this year.

"These numbers are very skewed," Haug said. "It's just a tough time to be using this to sort of make comparisons to revenues because last year was artificially low and this year is artificially high, so you get these massive changes in the growth rate."

Gov. Mike Parson posted a link June 5 to the May 2021 General Revenue Report on Facebook.

"Thanks to our balanced approach to COVID-19, Missouri is in a much better position than what was originally projected," Parson wrote in the post.

Haug said revenue for June should be positive as the state has fewer people receiving unemployment than it did last June, but the monthly revenue report for July is expected to show a negative change in collections.

"When you look at the July revenue report, it's going to look extremely bad because you're going to be comparing a relatively normal July to a July when we had an income tax due date," Haug said.