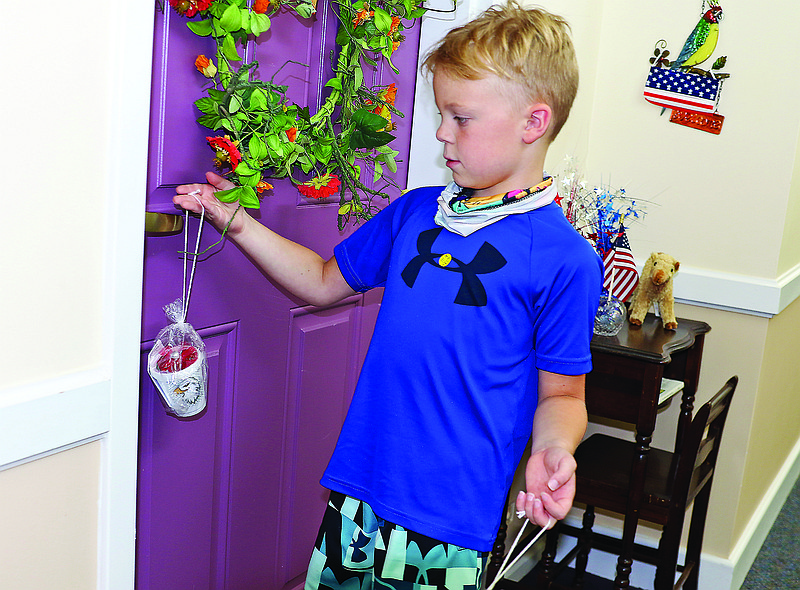 Anderson Naught places a gift on a resident's door handle Thursday at Heisinger Bluffs. Naught has been delivering homemade gifts to more than 70 residents since December, including cups of candy that were decorated with a cartoon eagle and a red bow with a pearl in the middle, and included a list of bald eagle facts.

Outside the residents' doors at the Heisinger Bluffs retirement home, American flags sit in wreaths, plants, baskets and vases. Some doors are decorated with homemade, smiling bug decorations, colored red, white and blue, and covered in stars and stripes.

For the past nine months, West Elementary School second-grader Anderson Naught has been dropping off gifts - most of them patriotic-themed - to more than 70 residents at Heisinger Bluffs.

Each month, Anderson and his grandmother, Linda Eisinger, drop off the treats at every door while the residents are away so they will return to a special surprise.

If you ask Anderson why he decided to start bringing these gifts to the residents, his answer is simple: "To make them happy."

Many of the gifts are homemade items made by Eisinger's friend, Charlotte Dudenhoeffer, who Anderson calls "G-ma Charlotte." Anderson and Eisinger add candy to the items and deliver them.

"Then, the ball started rolling," Dudenhoeffer said. "It went from a few neighbors to 72."

Some of the gifts they've given the residents over the past few months are the patriotic bug decorations, American flags with a flyer on flag etiquette, and poppies with a story about Flanders Field, where poppies memorialized the deaths of American soldiers.

On Thursday, Anderson and Eisinger dropped off cups decorated with flowers and photos of a bald eagle with candy, a note about the history of the bald eagle, and a card that says, "From Anderson Naught, Great Grandson of Don and Kas Eisinger."

"The residents have been so impressed with this young man and his gifts of kindness," Dudenhoeffer said. "Many of these residents are veterans that truly appreciate being remembered."

A few months ago, Anderson was recognized for his acts of kindness from the Veterans of Foreign Wars Basinger/Sone Memorial Post 1003 and VFW Auxiliary, who surprised him with a certificate for his efforts to bring happiness to others.

Heisinger resident Vera Backman said everybody looks forward to receiving the gifts each month, and it means a lot to them for Anderson to take the time to brighten their days.

"In the evening, at supper time, you'll hear people chit chat about how they got their little treat for the month," she said.

After talking to Anderson and finding out he likes cars, Backman, who runs a "Sewing for a Cause" group at Heisinger, made him a pillow with cars on it as a way to thank him and return the favor.

"His family gave me a picture of him with the pillow, and I thought that was really sweet and put it on the bulletin board so everybody could see it," Backman said.

Anderson has also received many heartfelt letters from residents, thanking him for thinking of them.

"He has gotten lots of really nice notes, and his mom saves all those so someday when he's an adult, he can look back and teach his kids to do something like this," Eisinger said. "I think it's very, very special to him."