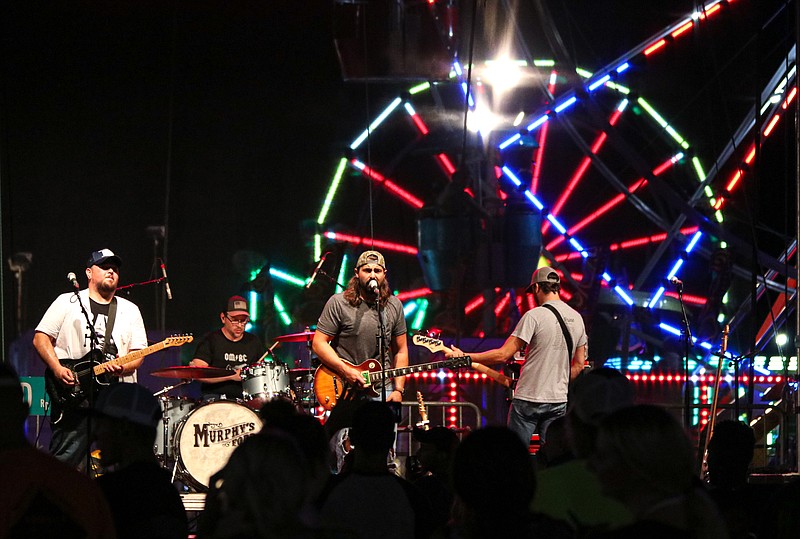 In addition to a host of 4-H and FFA events, the weeklong Jefferson City Jaycees Cole County Fair has a packed entertainment schedule.

The fair runs Monday through July 31 at the Jaycees fairgrounds, 1445 Fairgrounds Road.

Admission Monday is free, with $1 rides from PBJ Happee Day Shows on the midway.

The rest of the week, fair admission is $15 for ages 12 and older, and all concerts and arena events are included for free with paid admission. Weeklong passes will be sold for $35, which include a chance to win more than $500 in cash and prizes each night.

Unlimited rides are offered for $20 Tuesday through Saturday.

Monday night at the fair will feature a tractor pull at 7 p.m. at the arena and a performance by Disco Dick & the Mirrorballs at 9 p.m. on the Xtreme Body & Paint Stage.

Disco Dick & the Mirrorballs is a tribute band to the disco era formed more than 20 years ago. The band will "take the audience on a journey through the days in which Disco ruled," according to the Facebook event description.

On Tuesday, after a 6 p.m. pedal tractor pull, local group Murphy's Ford will take the stage at 9:30 p.m.

Murphy's Ford is a singer/songwriter band with members all hailing from Mid-Missouri; they aim to put a modern spin on country music.

Wednesday night at the fair will feature a cornhole tournament at 7 p.m. and Highway 65 Motocross at 7:30 p.m. The evening wraps up with a performance by Tennessee country artist Mitch Rossell at 9:30 p.m.

The cornhole tournament continues Thursday along with the Bump & Run with Tuff Truck at 7 p.m. With a balance of soul and twang, country artist Larry Fleet takes the stage at 9:30 p.m. Thursday.

Fleet has opened for Willie Nelson and debuted his first album "Workin' Hard" in 2019.

Opening for Hayes, Blair is a Missouri-raised country singer new to the music scene. Her influences range from Gretchen Wilson to Nelly and Justin Timberlake. Hayes is a Monument Records recording artist from Alabama who is know for the Top 10 hit "You Broke Up With Me" as well as the follow-up single "Craig."

The fair concludes Saturday with the Figure 8 Scramble at 7 p.m. and Puddle of Mudd concert at 9:30 p.m.

After nearly a decade hiatus, the rock group -- known for hits "Blurry," "She Hates Me" and "Famous" -- released its sixth studio album, "Welcome to Galvania," in 2019.