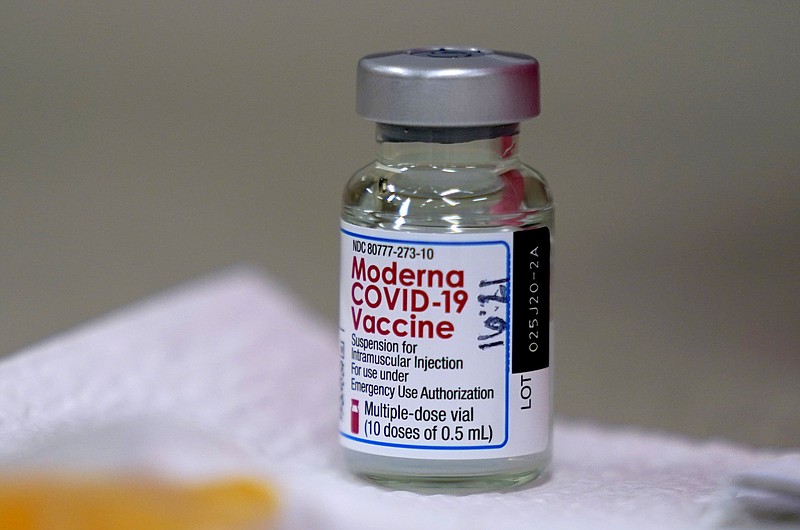 FILE - In this file photo dated Wednesday, Dec. 30, 2020, a bottle of Moderna COVID-19 vaccine on a table before being utilised in Topeka, USA. The European Union’s medicines agency on Wednesday Jan. 6, 2021, gave the green light to Moderna Inc.’s COVID-19 vaccine, a decision that gives the 27-nation bloc a second vaccine to use to fight the virus rampaging across the continent.(AP Photo/Charlie Riedel, FILE)

Clergy from around the state are joining calls for Missourians to get vaccinated.

More than 200 Missouri pastors and ministers have signed a statement urging Christians to get the COVID-19 vaccination.

The religious leaders from 12 disciplines are using teachings from the Scripture and their positions in communities to inspire more people to get vaccinated.

"Vaccine hesitancy in our pews puts our congregations and communities at greater risk," the Word&Way statement signed by more than 200 pastors and ministers states. "Given their safety and availability, receiving a vaccine is an easy way of living out Jesus's command to 'love your neighbor as yourself' (Mark 12:31). His warning against causing 'little ones to stumble' (Luke 17:2) also inspires our appeal, as every vaccinated adult helps protect our children under 12 who are still ineligible to receive the vaccines."

Christopher Dixon, pastor of West Finley Baptist Church near COVID-19 hotspot Springfield, said the statement isn't meant to cause panic but is intended to alarm Christians of the latest rise in cases, hospitalizations and deaths, and reaffirm a local commitment to vaccination efforts.

"We're not here to shame anyone or put anyone down. We're not here on any kind of political discourse to offer that up," Dixon said. "We're simply here to care for other people - men and women, young folks, all races, all backgrounds - and say this is something we would respectfully ask you to consider doing."

Darron LaMonte Edwards, lead pastor of United Believers Community Church in Kansas City, who also signed the statement, said he has taken a theological perspective to the vaccine conversation, as have many other religious leaders.

Edwards said it wasn't the medical, scientific or political points that helped him decide to get the vaccine and promote it to others, but he was instead moved by a passion for keeping his community safe.

"For me, this has everything to do with loving your neighbor, Mark 12:31 tells us that," Edwards said. "This is really all about compassion for our community."

As of Wednesday, the Missouri Department of Health and Senior Services reported the state had 9,728 confirmed cases in the last seven days, with a daily average of 1,390 cases.

In Cole County, there have been 269 COVID-19 cases in the past week, with a daily average of 38 cases, according to the DHSS dashboard.

Meanwhile, 40.4 percent of Missourians are completely vaccinated, and another 6 percent have initiated the process with a first dose. In Cole County, 38.4 percent of residents have a complete vaccine and 43.2 percent have a single dose, according to the DHSS vaccine dashboard.

In a Public Religion Research Institute poll presented in April, white evangelicals topped the chart for least likely to get a COVID-19 vaccine. The study also found faith-based approaches could be suitable for convincing this population, as 47 percent of white evangelical protestants who regularly attend church services report it would make them more likely to get vaccinated.

Cassandra Gould, executive director of Missouri Faith Voices and an ordained elder in the African Methodist Episcopal Church, said MFV has been actively working to encourage vaccines throughout the state.

MFV has hosted town halls with health experts, helped establish vaccine sites and held a memorial service for victims of the virus.

Gould said she signed onto the statement to help disrupt the trend of death the pandemic has caused and minimize the growing divide around the necessity of the vaccine.

She said MFV is also working to better understand the vaccine hesitancy among evangelicals.

Kaylor said some of the misinformation has been political or used to support an agenda, but local religious leaders would be more trusted.

"That's one of the things that I think is really great about the group of clergy that are coming together, is that they cross the political spectrums, they cross theological spectrums from very conservative to very liberal and a lot of spaces in between," Kaylor said.

Dixon also said white evangelicals may also be hesitant to get a vaccine because they see COVID-19 precautions as a political measure formed out of the 2020 election.

"I think some of the evangelical community was already a little bit on edge in this very hot-button election year and (vaccinations) were adding something in - or that was the perception - we're adding something in that perhaps you're being told to do," Dixon said. "In fact that's not the intended messaging, this is just a health precaution that is absolutely essential from a scientific and medical standpoint."