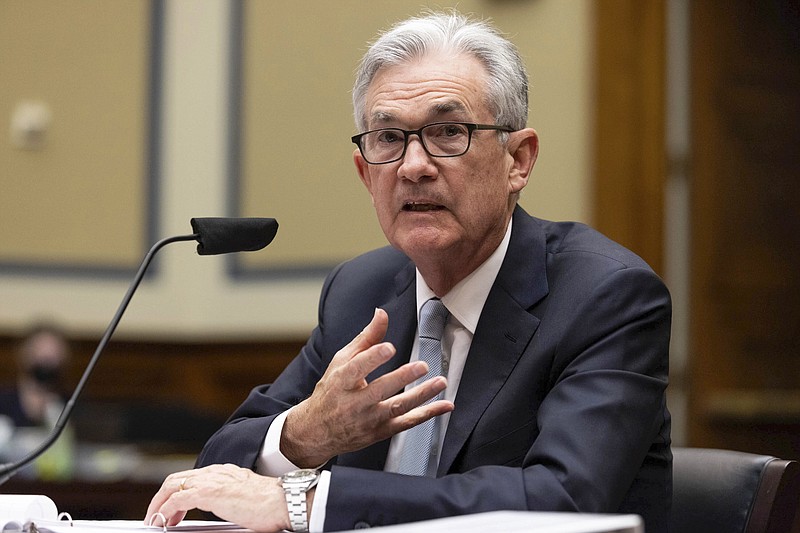 FILE - Federal Reserve Board chairman Jerome Powell testifies on the Federal Reserve's response to the coronavirus pandemic during a House Oversight and Reform Select Subcommittee on the Coronavirus hearing on Capitol Hill in Washington, in this Tuesday, June 22, 2021, file photo. Federal Reserve Chair Jerome Powell said that inflation “will likely remain elevated in coming months" before “moderating,” an apparent acknowledgement that price gains have been larger and more persistent than many economists forecast. In written testimony to be delivered Wednesday, July 14, at noon before the House Financial Services Committee, Powell reiterated his long-held view that the high inflation readings of the past several months have largely been driven by temporary factors, such as supply shortages and surging demand as pandemic-related business restrictions ease.(Graeme Jennings/Pool via AP, File)

At the same time, in testimony to the House Financial Services Committee, Powell signaled no imminent change in the Fed’s ultra-low-interest rate policies.

The Fed chairman reiterated his long-held view that high inflation readings over the past several months have been driven largely by temporary factors, notably supply shortages and rising consumer demand as pandemic-related business restrictions are lifted.

Still, House members peppered Powell with questions rising inflation in recent months, with some expressing concern prices will continue to accelerate. The chairman said the Fed would not respond to short-term price spikes by raising rates and risk weakening the economic recovery.

“We really do believe,” he added, “that these things will come down of their own accord.”

Powell’s remarks coincided with rising concerns, among economists as well as ordinary households, that intensifying inflation pressures are creating a burden for many people and posing a potential threat to the recovery from the pandemic recession. On Wednesday, the government reported wholesale prices, which businesses pay, jumped 7.3 percent in June from a year earlier. It was the fastest such 12-month increase on records dating to 2010.

And Tuesday, the government said prices paid by U.S. consumers surged in June by the most in 13 years. It was the third straight month that consumer inflation has jumped. Excluding volatile food and energy costs, so-called core inflation rose 4.5 percent in June, the fastest pace since November 1991.

Much of the consumer price gain was driven by categories that reflect the reopening of the economy and related supply shortages. Used-car price increases accounted for about one-third of the jump. Prices for hotel rooms, airline tickets, and car rentals also rose substantially.

But some increases could persist. Restaurant prices rose 0.7 percent in June, the largest monthly rise since 1981, and have increased 4.2 percent compared with a year ago. Those price increases likely are intended to offset higher wage and food costs as restaurants scramble to fill jobs.

The Fed has said it will keep its benchmark short-term rate pegged near zero until it believes maximum employment has been reached and annual inflation moderately exceeds 2% for some time. The central bank’s policymakers have said they’re prepared to accept inflation above its target to make up for years of inflation below 2%.

Powell said Wednesday that the economy is “still a ways off” from making the “substantial further progress” that the policymakers want to see before they will begin reducing their $120 billion in monthly bond purchases. Those purchases are intended to keep long-term borrowing rates low to encourage borrowing and spending.

He was asked to clarify what the Fed means by “substantial further progress.”

“It’s very difficult to be precise about it,” Powell replied. “We didn’t try to write down a particular set of numbers that would capture what we mean by that.”

At its most recent meeting in June, the Fed’s policymakers began discussing a reduction in those purchases, and Powell said Wednesday that those discussions “will continue … in coming meetings.”

Powell added that the Fed might adjust its policies if inflation, or the public’s expectations for inflation, “were moving materially and persistently beyond levels consistent with our goal.” Americans’ expectations for inflation are important because they can become self-fulfilling. If consumers foresee higher prices, they typically demand higher pay in response. Businesses may then further raise prices to compensate for the increased wages.

The chairman was addressing the House committee Wednesday as part of his twice-a-year monetary policy report to Congress. On Thursday, he will testify to the Senate Banking Committee.

In his testimony, Powell was upbeat about the economy, with growth on track “to post its fastest rate of increase in decades.” He said hiring has been “robust” but noted there “is still a long way to go,” with the unemployment rate elevated at 5.9%.

At their most recent meeting last month, Fed officials forecast that they may raise their benchmark short-term rate twice by the end of 2023, an earlier time frame than they had previously signaled.

Powell, whose term as Fed chair will end in February, drew some bipartisan praise Wednesday during the questioning by House members. President Joe Biden could announce as soon as this fall whether he intends to reappoint him to another four-year term.

“You have earned and deserved another term as chair of the Federal Reserve,” Rep. Patrick McHenry, a Republican from North Carolina, told him. “You have proven to be a steady hand throughout this pandemic or ongoing recovery.”

Reps. Andy Barr, a Republican from Kentucky, and Brad Sherman, a California Democrat, echoed the notion that Powell should be reappointed. The Senate would have to confirm him for a second term. Though Powell enjoys broad bipartisan support, some progressive groups oppose his reappointment because he has overseen the loosening of some regulations governing large banks.

On another topic, Powell said the Fed would publish research in early September on the potential for the central bank to issue a digital dollar. A digital currency would enable faster payments among banks, consumers and businesses and potentially allow Americans to hold dollars in electronic wallets on smart phones without needing an account at a conventional bank.

Powell said a digital dollar would be more efficient than having numerous cryptocurrencies and stablecoins issued by companies such as Facebook. A stablecoin is a digital currency that is backed by cash.