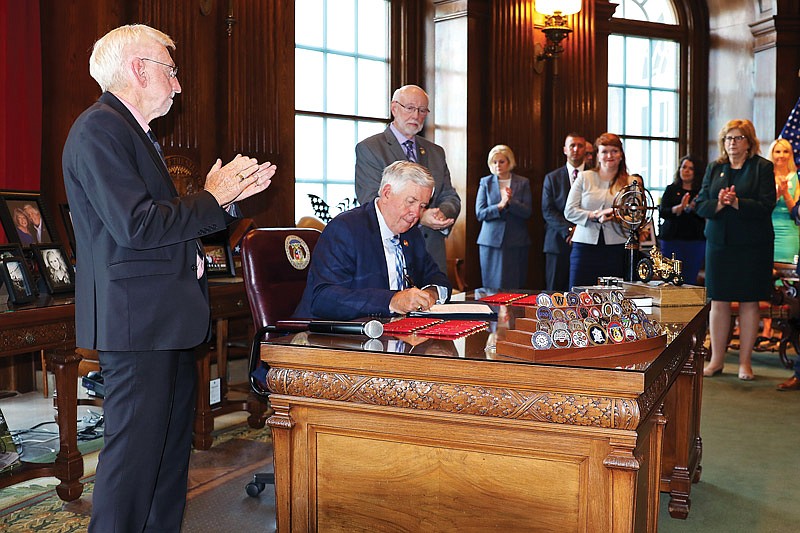 Missouri Gov. Mike Parson signs HB 557 on Tuesday, July 14, 2021, as Rep. Rudy Veit stands by and applauds in the governor's office at the Capitol.

Allen Knoll attended a religious boarding school as a child from the time he was 10 years old.

His mother married a man who had the money to send him from his home in Seattle to the school.

Knoll said he knows the schools affected him. Staff at the first school he attended in Mississippi abused him.

He then attended Agapé Boarding School in Stockton between the ages of 12 and 15. Missouri Attorney General Eric Schmitt announced in March he was investigating allegations of abuse and neglect at the school.

"Our parents didn't hear us. We've been saying the same thing for years," Knoll, now 34, said after attending a bill signing in Gov. Mike Parson's office late Wednesday afternoon. "This has been going on in this state, and states across the country for far too long. And nobody listened. They said we are troubled, we are liars, we are manipulators."

The fact is, he continued, there are too many victims complaining to ignore anymore.

And the highest office in Missouri is taking action, he said.

Missouri now has a little oversight over child residential homes, which have come under scrutiny after allegations surfaced about abuse and mistreatment at some facilities.

"It's all of our jobs to protect other people who can't protect themselves," Parson said. "I think this bill sends a loud signal to a lot of people: You better get your stuff together to be able to take care of people."

He said it was time to make the new law official.

Parson on Wednesday signed House Bill 557, requiring the license-exempt homes to have minimal reporting requirements, helping ensure the safety and well-being of children housed there. The Child Residential Home Notification Act requires homes to conduct background checks of all employees and volunteers at the homes.

State Rep. Rudy Veit, R-Wardsville, who sponsored the bill, said its passage had widespread support. Families who send their children to the faith-based homes do so anticipating their children will be well cared for.

"This bill protects our most vulnerable individuals," Veit said, "whose lives are entrusted to other individuals 24 hours a day."

Knoll testified during a special hearing late last year. He pleaded with lawmakers to prevent boys and girls from sitting in their chambers 20 years from now to testify about abuses at faith-based children's homes.

And, lawmakers said, "We believe you."

Until Wednesday, Missouri was one of two states that didn't require licensing or regulation of faith-based boarding schools.

Those institutions have been migrating to the Show Me State for the past 40 years.

However, reports of mistreatment and abuses began to surface.

Early in March, Schmitt announced his office brought 102 charges against Boyd and Stephanie Householder, owners of the now-defunct Circle of Hope Girls Ranch and Boarding School. Both were arrested.

Authorities charged Stephanie Householder with 22 felonies, including 12 counts of abuse or neglect of a child and 10 counts of endangering the welfare of a child.

Both remain in the Vernon County Jail without bond.

The new law also provides details about what background findings exclude people from working or volunteering in the homes.

"It protects the individuals and the reputations (of good actors) from people that are reporting to be religious and using it in bad faith. It keeps them from preying upon people in troubled times," Veit said.

Evil people came into Missouri and set up homes under the guise of being religious, he said.

"It was not religious," he said. "They put these kids through very, very serious abuse."

They preyed on the children and their parents, Veit said. He pointed out that parents pay homes thousands of dollars a month to take care of their children.

"Worse, they were tarnishing the reputations of all the good residential care facilities we have that are run by religious organizations," Veit said, "that provided great services for families in times of need."

Victims, who had reported their abuses but never were heard, came from all over the United States on Wednesday to witness the bill signing, Veit said. They put themselves forward, braving ridicule from some, he said.

They came from all over the country to stand up for a bill that will protect children, he continued.

"This bill will make Missouri a much safer place for our vulnerable children. It will protect our ability to have religious residential care facilities," he said.

The law provides a process in which the Missouri Department of Social Services can petition the court for an order for a home to present a child when there are allegations of abuse or neglect in the home.

The new law specifies whenever a case is referred to a juvenile officer for removal of a child, the attorney general also receives a referral.

Failure to comply with provisions may result in fines, misdemeanor charges and potential removal of a child.

DSS may also create rules that may include a fee to cover the visit of the notification process.

There is always a struggle between government and religion, Veit pointed out.

"This is a place where both stepped up," he said. "Religious organizations realized this was a good balance."

Lawmakers taking victims' word about being abused was a breakthrough, Knoll said.

"We can make some true change. Kids are our future," he said. "And I'll never know who I could have become."