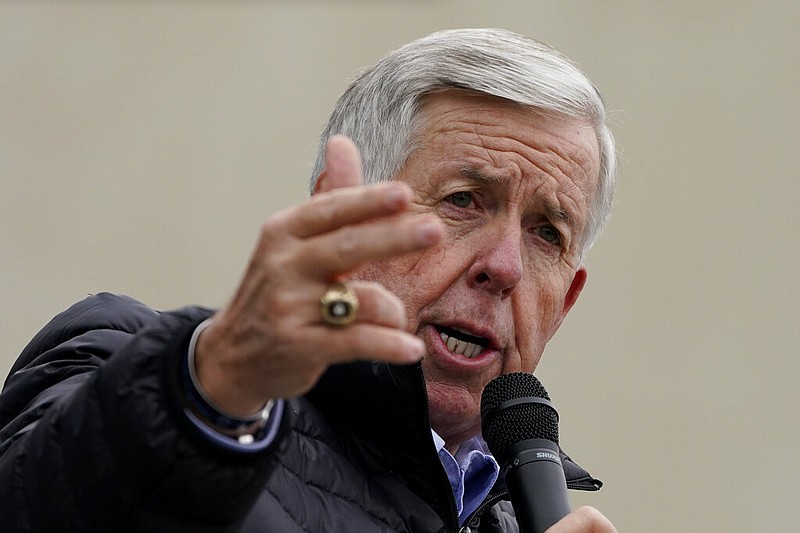 In this Oct. 25, 2020 file photo, Missouri Gov. Mike Parson speaks during a campaign rally at a gun store in Lees Summit, Mo.

A police chokehold ban, free feminine hygiene products for Missouri inmates and a new system for tracking police use of force were among the variety of public safety measures signed into law Wednesday by Gov. Mike Parson.

SB 53, a public safety omnibus bill sponsored by Sen. Tony Luetkemeyer, R-Parkville, was one of 10 pieces of legislation signed Wednesday. The bill contains provisions for police departments around the state.

The new law repeals the requirement that Missouri's attorney general must live in Jefferson City, states the Department of Corrections, county sheriffs and any other jailers must provide feminine hygiene products to inmates at no cost, and doles out a class E felony to police officers who engage in sexual conduct with detainees or prisoners, and those who publish personally identifiable information on the internet to cause harm to prosecuting attorneys and police, and correction and parole officers or their families.

SB 53 also bans police officers from using respiratory chokeholds - which the law defines as an attempt to control or disable an individual with applied pressure to the neck to control breathing - unless used in defense against serious physical injury or death.

Kevin Ahlbrand, the legislative director for the Missouri Fraternal Order of Police, said the organization was in favor of the reforms and protections signed into law.

The Fraternal Order of Police worked with Sen. Brian Williams, D-Ferguson, on the bill language and testified in support of it, Ahlbrand said.

"A chokehold is considered deadly force, and we're totally in agreement with that," Ahlbrand said.

The new law does not ban lateral vascular neck restraints, the standard for police officers because it does not restrict airflow, according to the National Law Enforcement Training Center's website.

The act states every law enforcement agency in the state must collect and report local data on incidents that require the use of force to the Department of Public Safety and the FBI.

DPS is then required to publish a public report with the data every five years, as well as analyze it for trends and disparities.

DPS Communications Director Mike O'Connell said the Missouri Highway Patrol, an agency within DPS, already tracks the use of force after the FBI asked states to voluntarily provide the information years ago.

The legislation allows taxpayers to initiate actions for injunctive relief if local governments decrease law enforcement budgets by more than 12 percent of the suggested budgets of other local governmental departments over a five-year amount.

SB 26 also lays out how police departments and individual officers should conduct and respond to disciplinary actions.

Disciplinary investigations into police officer conduct are required to inform the offending officers of the existence and nature of the violation, as well as who will be conducting the investigation, in writing. They are to be informed they are answering questions under threat of disciplinary action but will not be used in a criminal case. Investigations can be conducted for a "reasonable" amount of time, typically 90 days unless extended, and only while the officer is on duty.

Complaints against officers are to be supported with written statements, and investigations are to be completed by up to two investigators at a secure location within the agency conducting the investigation. Investigators cannot threaten, harass or promise rewards to officers under investigation, who are also permitted to have an attorney present.

Officers are provided the opportunity to submit written responses to materials in their personnel file and can be compensated for economic losses if no misconduct is found. Officers suspended without pay are entitled to a due process hearing.

Ahlbrand, a sergeant with the St. Louis Metropolitan Police Department, said the new law gives a level playing field and due process to officers across the state facing administrative investigations. The bill doesn't address criminal charges faced by officers.