Controversial topic at heart of next Scene One show 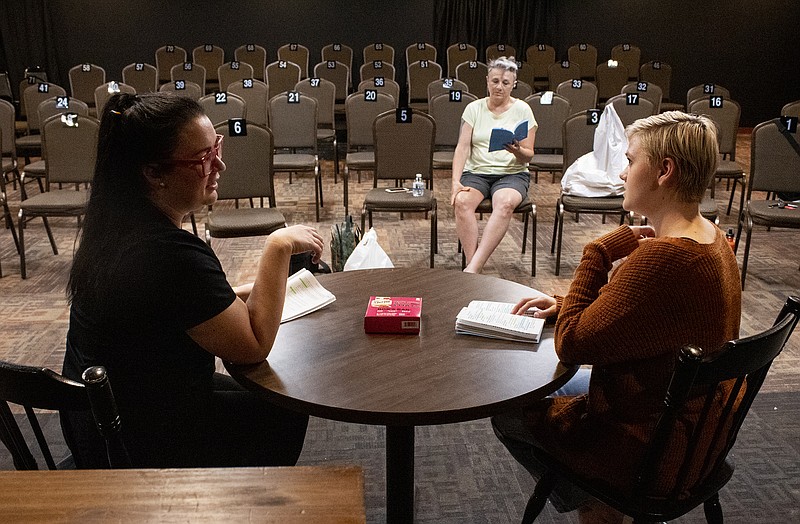 In the mood for a funny, thought-provoking play that will satisfy your sweet tooth? Look no further than Scene One Theatre's production of "The Cake."

The story revolves around a passionate and loving cake-maker named Della. Della is surprised and excited when Jen, the girl she basically raised, comes back home and asks her to bake a cake for her wedding. But Della is shocked to find out Jen's new fiancée is a woman. She refuses to bake their wedding cake because of her religious beliefs. This launches her into an internal battle that makes her question what she truly believes.

"It hits home because I grew up under that same very, very conservative evangelical Christian umbrella," Rachel Steinmeyer, who plays Della, said. "Once I left Jeff City, I was able to blossom a little bit and experience more. Della is almost difficult to play. It's emotional because it's familiar."

On the other hand, Jessi Green has no trouble relating to her character. Green's character, Jen, is torn between her sexuality and how she's been raised.

"I have suffered through that as well," Green said. "Especially being part of the queer community -- it's something that tears you up inside if you have conservative family members."

These issues also bleed into Jen's relationship with her fiancée, Macy, who is played by Da'Mia Day.

Macy is loud, smart and outspoken. She doesn't understand why Della can't accept who Jen loves, even if it goes against her conservative values.

"The Cake" was inspired by a Supreme Court case: Masterpiece Cakeshop v. Colorado Civil Rights Commission dealt with a baker who refused to bake a wedding cake for a gay couple. This sparked a nation-wide debate on freedom of religion versus discrimination.

Hit NBC show "This is Us" writer Bekah Brunstetter was inspired by this, and she put her own spin on the story and wrote "The Cake."

Day recommends people look into the play before they buy their tickets because of these larger implications. According to her, it can be a "hard pill to swallow" depending on your politics.

"They are getting married in the time that we are, and they're being denied access," Day said. "If you are not really sure how you feel about both of those subjects, the situation itself can be kind of uncomfortable. But it's also a conversation that we need to have."

Director Mary Jo LaCorte hopes this play will spark some introspection in the Jefferson City community.

"We're in a relatively conservative community," LaCorte said. "I would hope that the people that would come see the show would get a better understanding of both sides of the story, wherever they are within their beliefs."

LaCorte warns parents to research the play before bringing children. She said the show might be suitable for older children with parental guidance, but it's for a more adult audience.

Print Headline: Controversial topic at heart of next Scene One show