Residents speak on critical race theory at board meeting 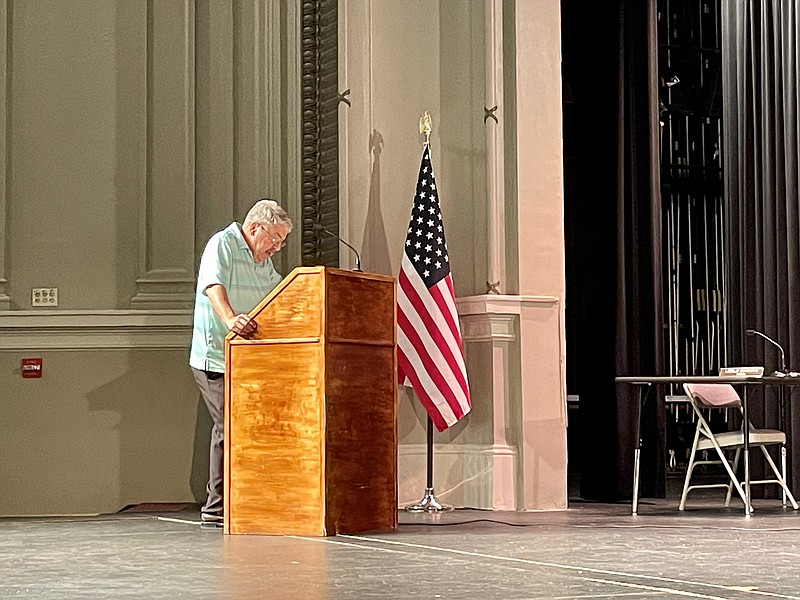 During the Jefferson City School District board meeting July 12, 2021, Jefferson City resident and attorney Curtis Thompson, who asked the board in June to adopt a policy prohibiting aspects of critical race theory, said he received about 150 signatures in a petition in response to the board not acting on the resolution.

Critical race theory is a decades-old academic framework that examines the way race and racism influence politics, culture and the law. It is centered on the idea racism is systemic and not merely the product of individual biases or prejudice, but also something "woven into legal systems and negatively affects people of color in their schools, doctors' offices, the criminal justice system and countless other parts of life," according to the Washington Post.

The Jefferson City School District's official curriculum does not include critical race theory, but teachers can still discuss it in class.

At the meeting, Superintendent Larry Linthacum read a statement about the topic and presented a document showing the Missouri Learning Standards, which the district's curriculum is based on.

"The Jefferson City School District strives to create a healthy learning environment for all students, and to ensure every child graduates college, career, and life ready," the statement says. "One way we do that is by providing students with opportunities to look at both sides of issues and encouraging them to research, think critically, and appreciate opposing viewpoints.

"If there is discussion of current events or critical race theory in a classroom, it is from the approach to provide exposure and encourage dialogue so that our students leave us with the ability to look at all sides of a complicated topic," the statement continues. "We trust, support, and have confidence in our teachers to lead appropriate discussions and to create a learning environment in which students feel free to express their voices."

Linthacum said if a teacher is teaching anything in a way that is inappropriate or tells students what to believe, administration would address it.

"If we feel they are influencing or promoting or endorsing, then that needs to be addressed, and that's a personnel issue that can be addressed individually," he said.

Board of Education President Ken Enloe said he has trust and confidence in teachers to lead conversations about controversial topics appropriately.

"We have every reason to trust their skills, abilities and expertise to lead those conversations," he said.

Five people who spoke at the open forum were in clear support of teaching about critical race theory to allow students to think critically.

"This is not about race - it's about critical thinking," Coleman said.

She said thinking critically allows people to understand and accept others and understand what's happening in the world.

Thorpe Gordon Elementary School Principal Delora Scaggs said everybody seems to have the best interest of the students in mind, so she encourages anybody who is opposed to students learning about critical race theory to have conversations with people who believe it should be taught so they can understand their views.

Two people spoke in support of critical thinking and said there should be a happy medium with all sides being taught.

One person said he believes it's important for people to believe what critical race theory is, because he thinks many people don't understand it.

Jefferson City resident and attorney Curtis Thompson, who also spoke on Monday, asked the board in June to adopt a proposed resolution that would prohibit the district from compelling students to adopt 11 specific beliefs, including that "any sex, race, ethnicity, religion, color, or national origin is inherently superior or inferior or that any individuals are inherently privileged, racist, sexist, or oppressive," or that "the United States is fundamentally racist or sexist."

Thompson said he received a letter from Enloe the next day declining the proposal on the board's behalf.

At last month's board meeting, six people, including Thompson, spoke in the open forum opposing critical race theory; one person supported it.

Thompson said the draft meeting minutes from June, included on Monday's meeting agenda, are incorrect because they state he aims to "ban critical race theory." He said his resolution doesn't specifically state that, and he asked the board to not adopt the minutes as drafted.

"If adopted, it would probably apply to CRT, but CRT is not the only issue involved," he said.

Thompson told the board he received about 150 signatures in a petition in response to the board not acting on the resolution.

"I'm presenting it to you so you understand that people in the community are outraged that you did not adopt the resolution that I proposed," he said.

The board voted to approve the minutes.

Linthacum said he respects everyone's views and appreciates their comments.

"We appreciate the passion and desire of our community to get involved in our schools, even if we don't always agree - and that's okay," he said. "But bottom line, we're in this together for the students in our district. We recognize there are a lot of different parts to it, and we respect that, even opposing viewpoints. At the end of the day, we are in this together."

It also approved a contract with All Systems for $20,918 to add nine doors to the access control system at Capital City High School's stadium.