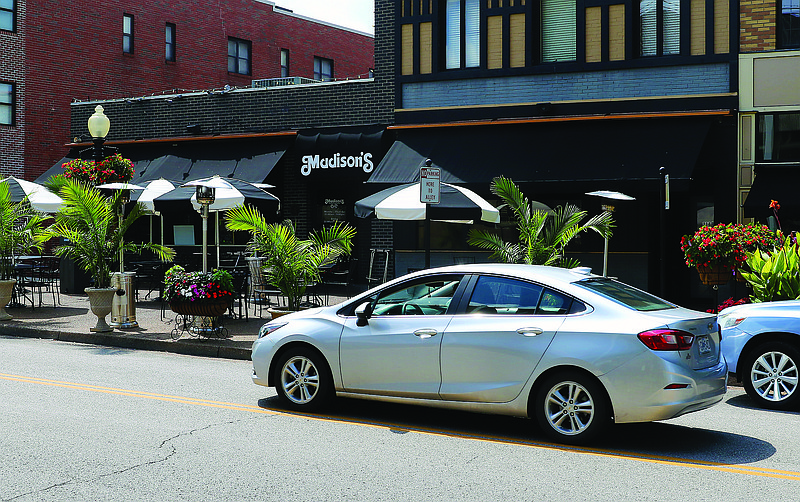 Gov. Mike Parson signed SB 126 on Wednesday, which makes it legal for restaurants like Madison's to sell to-go alcoholic beverages.

Missouri bars and restaurants can now permanently offer carry-out alcohol beverages on their menu and begin pouring earlier on Sundays.

To-go containers must be rigid and saleable, cannot have openings for straws or sipping holes, and cannot exceed 128 ounces, the law states. Containers must be put in single-use, transparent sealed bags or sealed with tamper-proof tape to indicate if they have been opened. Containers are also required to display the company name and address, as well as a warning stating the beverage contains alcohol.

Customers are required to purchase food prepared on location, classified as a meal in the new law, in conjunction with the purchase of alcohol to-go.

Bars and restaurants cannot fill to-go alcohol orders in amounts more than twice the number of to-go food orders and are required to provide a dated receipt.

The law also extends the time for Sunday liquor sales by the drink, sales for off-premise consumption and sales in convention centers. Liquor can be sold beginning at 6 a.m. Sunday and through 1:30 a.m. Monday, the same timeframe as other days in the week. Sunday liquor sales were previously limited to the hours of 11 a.m.-midnight.

State Sen. Justin Brown, R-Rolla, sponsored the legislation because, he said, the previous regulations were confusing and inconvenient for consumers and he wanted to remove the inconsistencies.

"The ability to sell carry-out beverages along with meal orders made the difference between survival and economic ruin for many restaurants during the COVID-19 pandemic," Brown said in a news release. "The temporary waiver proved to be extremely popular with consumers and showed that pre-pandemic regulations on to-go liquor sales were unnecessary. This legislation increases choices for consumers, helps businesses remain profitable and decreases regulatory burdens."

The Missouri Department of Safety's Division of Alcohol and Tobacco issued its first waiver temporarily allowing carry-out alcohol in April 2020 to assist restaurants and bars struggling to attract customers during the pandemic. The waiver had many of the same regulations as SB 126.

Mike O'Connell, communications director for Alcohol and Tobacco Control, said there haven't been many complaints for carry-out alcohol violations and he expects businesses will comply with the law.

ATC has had fewer than 10 violations related to to-go alcohol sales since the beginning of the pandemic, O'Connell said, all of which were for not requiring that food be purchased at the same time or not using sealed containers.

O'Connell said the new law is particularly beneficial for liquor sales, as opposed to beer or wine.

"Just selling a six-pack of beer isn't as profitable as the markup on a specialty drink like a margarita," O'Connell said.

O'Connell said there has been a trend of more people returning inside to order alcohol as COVID-19 restrictions are starting to be lifted.

Scott Drinkard, owner of Spectators Sports Bar and Grill in Jefferson City, said as of right now he probably won't change operations as a result of the new law.

"We didn't get into the curbside liquor sales or drink sales or nothing like that," Drinkard said. "We did some to-go orders with a couple of our restaurants, but if they wanted a cocktail, great, but we weren't really promoting it."

During the pandemic, Drinkard said, he closed a couple of his five locations to focus on keeping staff employed and cutting costs. He said Spectators isn't well set up for carry-out alcohol orders.

Depending on how competitors react to the permanent change, Drinkard said, he might decide to put more emphasis on to-go alcohol orders.

"Right now, it's not something I foresee striving to change in any of our locations," Drinkard said.