Concept of runoff primary could be revisited 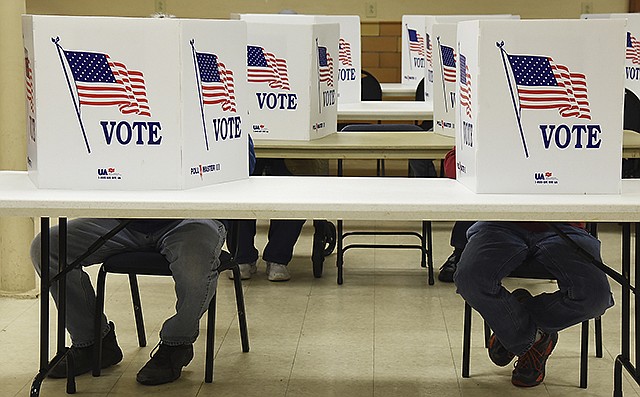 Voters in the outlying areas on the near eastern part of Cole County fill out their ballots Tuesday, Nov. 8, 2016 at Plues Hall at Immaculate Conception Church.

In the previous regular session of the Missouri Legislature, there was a push to implement a runoff election if no candidate receives more than 50 percent of the vote. Although some have claimed the idea was aimed at hampering former Gov. Eric Greitens' chances of winning the U.S. Senate race, the legislator behind the proposal said this wasn't the case.

During the last few days of the legislative regular session, Sen. Bill Eigel, R-Weldon Spring, proposed an amendment to a bill that would have moved the primary election to June with a later runoff election in August, if necessary, between the top two vote-earners. Eigel's proposal would have only affected congressional and statewide elections.

Eigel said his proposal was following the lead of several other states, including Arkansas and Oklahoma, which conduct runoff elections as part of their primaries.

Many have said this is an attempt to hurt Greitens' chances of being elected, including Greitens' campaign manager, Dylan Johnson.

"Gov. Eric Greitens is dominating this race, and everyone knows it," Johnson told the Missouri Independent. "He's going to win, and there's nothing that politicians in Jeff City can do to change that. This is just a sad, desperate attempt by the swampy establishment to try to subvert the democratic process. They will fail miserably."

Eigel addressed this in an interview with the News Tribune.

"I have heard the concerns relative to the former governor," Eigel said. "I can tell you, that's not part of the calculation. Nobody creates policies at the state level based on the ups or downs of a single individual who may or may not be running for office sometime in the future. I think that's just more political distraction than anything else, and I'm focused on whether or not the policy is good for the state."

Most of these concerns arose from the expiration of the proposed measure at the end of 2024. Eigel felt that having a midterm and presidential election was a good test of the idea.

"The reason we chose just 2022 and 2024 as the term that we settled on is because this is a pretty significant change to our primary process, and we wanted to give it a test drive," Eigel said. "If everything goes smoothly - as I expect it will - I would envision us coming back to extend it a bit further."

Eigel said he proposed the amendment because of the high number of candidates for statewide offices. Several Missourians have already announced their intention to run for U.S. Senate, and candidates can file for the 2022 primary elections from Feb. 22, 2022, through the end of March 2022.

"We're seeing more and more people run for these offices - which is good - but that means that the winning threshold is getting lower and lower," he said. "Right now, you can move through that process without actually having a clear majority of the support from the people that identify with that particular party."

Eigel said the measure had a good debate and reached a consensus to move out of the Senate. Although it didn't pass through the House, Eigel said he spoke to representatives that were in favor of it.

Rep. Dan Shaul, R-Imperial, serves as the chairman of the House elections committee. Shaul said he opposed the runoff primary because it was added on as an amendment, so it wasn't vetted in a committee hearing. He mentioned he won't be sponsoring any legislation with a runoff primary included, but he would like to hear more information and decide if it would be good for Missouri.

Eigel said the runoff primary conversation will come up again, but he doesn't know if he or someone else will file that bill. He said he was confident it will get out of the Senate again and see where the discussion goes.

Election reform will be a popular topic in the next year's Legislature, Eigel said.

Shaul was among the Republicans on the House elections committee that asked Gov. Mike Parson for a special session to address election reform. He said his goal is to pass election reform so Missourians of every political party can trust the state's elections.

"Elections - people have to trust them," Shaul said. "If you don't trust them, whether the reason is founded or not, you got to have trust in the system, and you have to believe the system is fair."

Print Headline: Concept of runoff primary could be revisited