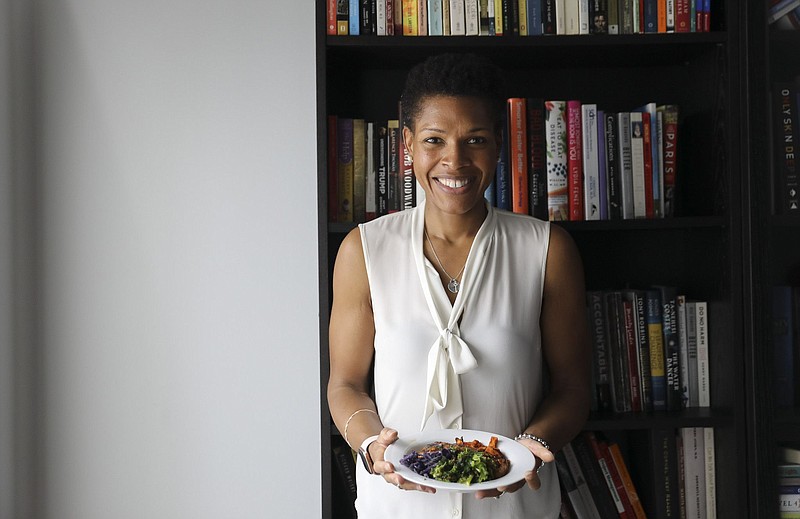 CHICAGO In her last trimester, in the midst of dealing with family and work issues as well as preparing for a new baby, Michelle Emebo felt stressed.

"I didn't realize how much it was impacting me until I went to see my health care provider and my blood pressure was up," she said.

Doctors monitored her high blood pressure, which stuck around even after her daughter's birth. Postpartum depression contributed to a tough time getting back on track toward a healthier lifestyle, said the 36-year-old Tinley Park, Illinois, resident.

As a clinical researcher, Emebo knew this put her at risk for even more serious cardiovascular diseases. So she revamped her life, focusing on nutrition and exercise to work on pregnancy-related weight gain that contributed to her high blood pressure. She lost about 75 pounds, all in an effort to not be reliant on medication and prep for a healthier potential second pregnancy.

"It was stressful for me," she said.

According to a study published Dec. 16 in the Journal of the American Heart Association, Black women have the highest risk of pregnancy-related heart problems, even when adjusting for socioeconomic differences.

In December, the federal Department of Health and Human Services announced a plan to improve maternal health that includes getting blood pressure under control for 80 percent of reproductive-age women.

Right now, according to HHS, about 9 percent of all women of reproductive ages - considered ages 20-44 - and 18 percent of Black women in this age group, have hypertension, or chronically high blood pressure. This puts them at higher risk for pregnancy complications such as preeclampsia, heart attack, postpartum bleeding and kidney failure. Among these women, 17 percent are unaware they have hypertension. The agency says hypertensive disorders are responsible for 7 percent of pregnancy-related deaths in the U.S.

Illinois officials have been monitoring significant maternal health disparities among Black women, who are six times more likely to die in Illinois from pregnancy-related conditions. The reasons behind this are layered, experts said, but include socioeconomic factors that can create barriers to care and explicit and implicit bias within the health care industry.

In the state's 2018 report on maternal mortality, among pregnancy-related deaths it studied, hypertension was among the most common causes of death, along with hemorrhage and infection.

The Illinois Perinatal Quality Collaborative zeroed in on hypertension in 2016, encouraging providers to treat patients with hypertension within 60 minutes and provide more discharge education and follow-up appointments.

In the new report, researchers noted that although many studies attribute socioeconomic factors as a leading contributor to disparities, they found Black women were at risk even when adjusting for those factors.

"Those findings are troubling and alarming as they show persistently worse outcomes in Black women with the highest income and insurance levels when compared with White women with the lowest levels," the researchers wrote.

What would help, researchers said, is more data on maternal cardiovascular outcomes and a better understanding of risk as well as socioeconomic and racial factors. Researchers said obstetricians treating pregnant women should be aware of their risk, and closely monitor them.

"Women at increased risk for heart disease should be closely monitored during and even after pregnancy," Samir R. Kapadia, author of the study and chair of the Cleveland Clinic department of cardiovascular medicine, said in a statement.

Although many women are regularly monitored during pregnancy, there is a gap after they leave the hospital. The American College of Obstetricians and Gynecologists has suggested that a "fourth trimester" of care after women leave the hospital and at-home visits after birth by nurses are ways Illinois is working to monitor and help new moms.

Before and after pregnancy, Emebo wants women to think about themselves.

"Your body gives everything to the baby. You forget you have to get back to taking care of yourself," she said. "I'm a separate person from being a mom and even a wife, and it's critical for me to put my health at the forefront."

Print Headline: Pregnant or postpartum Black women are 45% more likely to die in the hospital and are at higher risk for heart problems