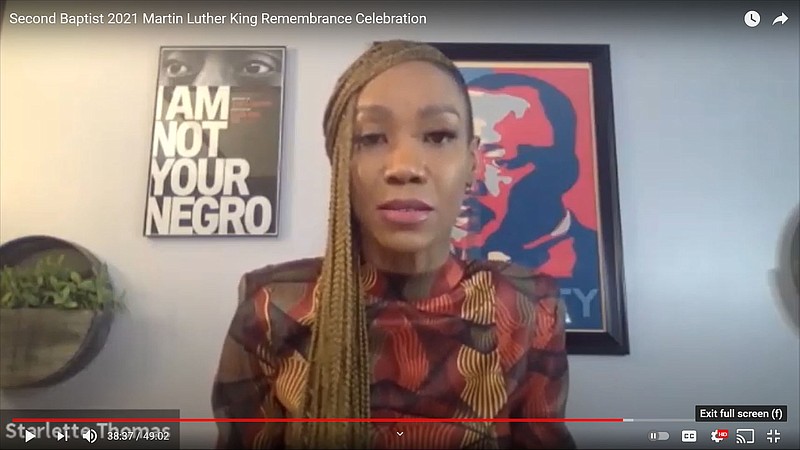 On the eve of Martin Luther King Jr. Day, the Rev. Starlette Thomas called for people to "cry out for justice."

Thomas is the minister to empower congregations at the District of Columbia Baptist Convention in Washington, D.C. She was the featured speaker Sunday for the Virtual seventh annual Rev. Dr. Martin Luther King Jr. Remembrance Service. The annual event is hosted by Second Baptist Church.

Thomas also called for unity: "More than 50 years after (King's) death, we couldn't unite if his life depended on it," she said in a nearly 20-minute speech.

The program's theme was "Each generation must do its part for freedom to ring."

Thomas said she fears we are content with the sound of King's words and the way they make us feel. We've named schools after King, but what has our society learned from him, she asked. We pay tribute to him, she asked, but to what end?

King's words are preached, but not practiced, Thomas said.

"We should not look at him but ourselves, because he's been to the mountaintop," she said, adding our best tribute would be to join him there.

King wasn't saying anything new, but was merely repeating a message, one given to the Apostle Paul.

"We shouldn't have told our children that this land was ours for the taking," Thomas said. "That God said we could have it. That murdering, raping, and eating indigenous people and kidnapping, renaming, enslaving, raping, beating and killing African people was God's will. That God blesses this American way."

She said President Donald Trump shouldn't have told his supporters that the 2020 presidential election was stolen.

Some white people believe they "have the right to judge what is true and tell you what isn't. See the history of lynching, see the noose and the cross they brought," she said.

She said people stormed the U.S. Capitol on Jan. 6 with no concern for police, because the police were on their side. "Because justice is not blind," Thomas said.

The prerecorded service was released at 4 p.m. Sunday and can be watched by visiting the church's Facebook page at www.facebook.com/SBCJCMO.

The Rev. W.T. Edmonson was awarded the Drum Major for Justice Award for his work with the church and for social justice. The program also included soloist LaTrise Wilson.

Thomas is a first-generation preacher, an ordained minister, author and activist.

She is pursuing a doctorate of ministry degree at Wesley Theological Seminary in Washington, D.C., studying ecclesiology, the intersections of gender, politics, and race and their interplay for a transformative spirituality.

Also on Sunday, the Catholic Church issued a statement honoring the late King.

"Today we honor the memory of Dr. Martin Luther King Jr., a Christian who sacrificed his life in enabling our country to come to a 'more perfect union,'" said Bishop W. Shawn McKnight, bishop of the Diocese of Jefferson City. "His words are perhaps more urgent today, as we struggle with what we can do to heal the terrible divisions and to cease the violence happening in our country."

McKnight added that King was a strong advocate for peace-making and nonviolence.