Adrian's Island: Something out of nothing 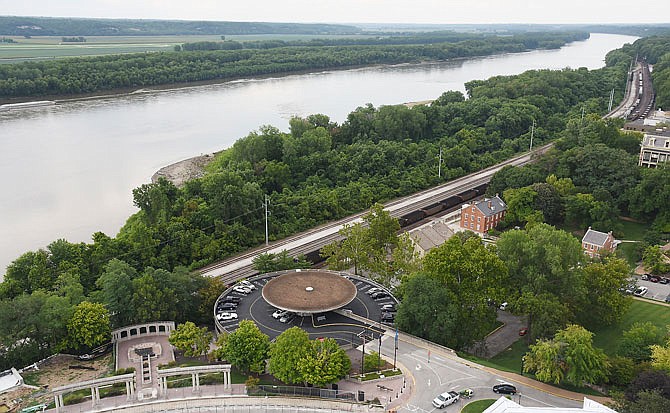 "Land is going to deposit down river from those wing dikes," Harry Adrian said to his son, Roger, as they crossed the Missouri River bridge one day. They were returning from the family-owned quarry off Highway 63 North.

In the early 1960s, the Corps of Engineers built wing dikes on the south bank of the Missouri River between the Mill Bottom and the prison. Harry, a self-proclaimed "river rat," who had spent most of his adult life working on and around the river knew what this meant. The water now between those dikes, would someday be replaced with dirt as the muddy Missouri would swirl and settle.

Harry had the company's attorney, David Brydon, draw up a proposal to the County Court of Cole (now the Cole County Commission) to purchase the "land." "He was laughed at," his grandson, Michael Adrian, said, "because there was no land there!"

After a few years, as he predicted, a mostly muddy, sandy land mass was taking shape, sometimes above, sometimes below the water. By March 1967, Harry Adrian's proposal was accepted by the county and 100 acres was sold for $5/acre, a very generous acreage estimate given that the land probably has never amounted to that much, especially as early as 1967.

The land sale went surprisingly smooth, but it soon raised legal questions as murky as the river. Was it the county's land to sell? Or the city's? Or maybe the railroad's or possibly the state's?

City employee Pat Kliethermes confirmed an 1881 city agreement that leased the riverfront land to the railroad for 99 years. Yet in 1968, it was the Missouri Pacific Railroad (later merged with Union Pacific Railroad) that threatened to contest the county's sale of the land. Could they do that if they are mere renters?

State laws say land that accumulates downstream from a wing dike is an accretion and owned by the adjacent property owner. If it becomes separated from the bank by water, it is an island. Unclaimed river islands are the property of the county in which they lie. Depending upon the river stage, Adrian's land was sometimes an island but sometimes not.

The railroad contended the land was not an island but an accretion in which case it belonged to the adjacent landowner: them. The threat to sue never materialized, perhaps because, even to them, ownership was not clear.

In a twist of irony, the Daily Capital News reported that on that day of the sale in March 1967 the land "was completely underwater."

At the time Harry and Roger Adrian purchased the property, they were in the quarry and materials business.

"He had no real plans for the land," grandson Michael said of Harry's intentions. And so, in 1974, Harry and wife, Teresa, and Roger and wife, Judy, "gifted" the land that we now call Adrian's Island to the Jefferson City Housing Authority. "Harry wanted the city to make use of it for the benefit of its citizens."

The first development plan was hatched by the city in 1974. This ambitious plan included restaurants, shops, a 9-hole golf course and a clubhouse. It was quickly panned as were several subsequent plans due to the cost to taxpayers. However, the biggest obstacle was access - how to cross the tracks, seven to eight sets, between the Capitol and the island.

This was an impasse until 2018 when B.J. DeLong announced her generous donation of 3.2 million toward construction of a bridge over the railroad to the island. This was the culmination of the donation deal that started with her late husband, F. Joe DeLong, who brokered the original deal with the Adrian family.

Jefferson City's long anticipated connection to their river came closer to reality at a historic groundbreaking for the bridge in August 2020. It is hoped the dedication will coincide with Missouri's Bicentennial celebration this fall. When completed, it will span the railyards starting from the Veteran's Memorial on the Capitol grounds and terminate 765 feet northeast on the island, 30 acres of relatively stable wooded terrain, 13 acres of which has not flooded in recent years. Private money will pay for the bridge not taxpayers. Besides DeLong's contribution, the Naught family donated $75,000.

The cost of development and maintenance of the land under the direction of the Parks and Recreation department has been secured for the most part through the Deborah Cooper Foundation and a half-cent capital improvement tax passed in the 1980s for this specific purpose. The rigorous restrictions imposed by the Corps will limit development to passive use, such as trails and fishing - no golf courses or clubhouses.

Whether it is an island, an accretion or belonged to the county, city or railroad, 54 years later, Harry Adrian's vision will soon be reality. Jefferson City will finally connect to its river.

Jenny Smith is former editor of the Historic City of Jefferson's newsletter, Yesterday and Today. She acknowledges the help of Allen Pollock, Carolyn McDowell, Michael and Roger Adrian, Bob Gilbert, Patrick Kliethermes, Deborah Goldammer and Wayne Johnson in preparation of this article.

Print Headline: Adrian&#8217;s Island: Something out of nothing