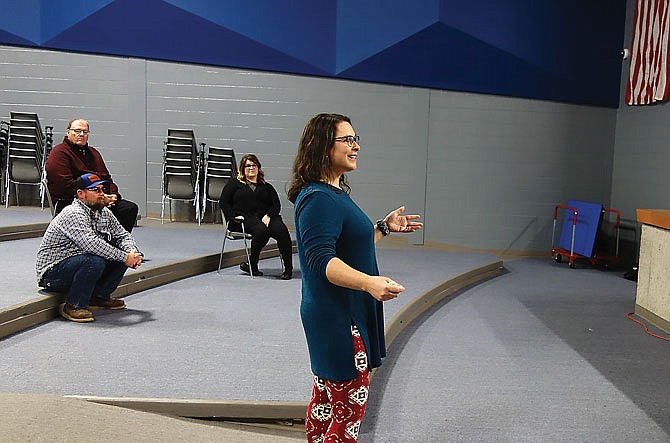 Jeannie Sneller, sixth- and seventh-grade science teacher at South Callaway Middle School, talks Wednesday about the "Linking Science and Literacy for All Learners" initiative during a South Callaway Board of Education meeting.

MOKANE, Mo. - By placing microphones in meadows and listening for hums, scientists can track the activity of busy bumblebees.

"They get excited about it, and that is key," Sneller said.

Sneller, who teaches science to sixth- and seventh-graders, participates in the University of Missouri program "Linking Science and Literacy for All Learners." She shared about LSLAL during Wednesday's South Callaway Board of Education meeting.

Through that program, MU researchers and graduate students team up with Missouri teachers to develop science, technology, engineering and mathematics-focused learning modules. Each module focuses on a theme, such as the aforementioned bumblebee research or the impact of climate change on human health.

"(The researchers) take the latest research and scale it down to an eighth-grade level text," Sneller said.

That anchor text gets paired up with other relevant educational materials - videos, magazine articles and even manga - and activities meant to encourage students to think about the scientific process and draw their own conclusions and connections.

Texts sets are tweaked for different grade levels and for special education and advanced students.

Once the multimodal text sets are prepared, the participating teachers trial them in their classrooms.

"We focus on making scientific claims based on evidence and backing it up with reason," Sneller said. "If you're going to claim the Earth is flat, you'd better have a lot of evidence."

In the process, they don't just learn about science; they develop their abilities to use logic, comprehend and compare texts and make coherent arguments in writing.

"This helps kids see that science and English language arts are all intertwined," Sneller said. "I see kids making these connections."

At the beginning of her first year teaching a LSLAL unit, Sneller gave her students a pre-test that presented them with excerpts of the texts and asked them to draw conclusions.

After 13 days of instruction, those same students were writing full sentences and referencing data and information from multiple sources.

"Being able to read longer texts without giving up so easily - that's a big problem on MAP tests, and we've seen big (improvements)," Sneller said.

This is Sneller's third year participating in the program.

"I love the idea of it because I actually started as an English major," she said.

This year, she and other participants are working on a text set about vaping, she added.

In addition to developing and teaching the texts in partnership with MU, participating teachers also get to attend annual professional development workshops and receive academic year support.

More information about the program and the first two text sets ("Flight of the Bumblebee" and "Earth and Human Body Systems") are available at scienceandliteracy.missouri.edu/resources-materials/.