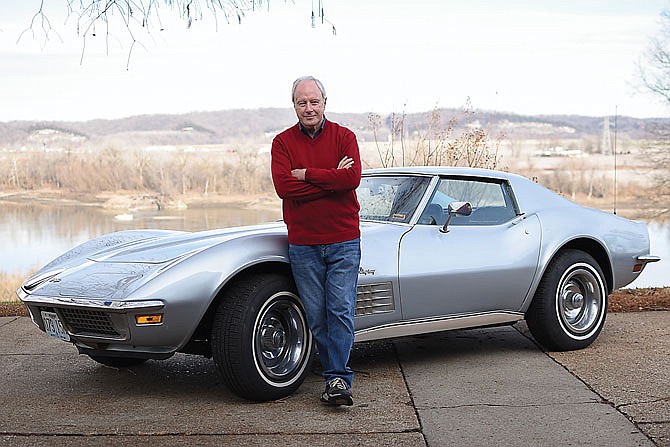 Rick Branstetter stands next to his 1970 Corvette Stingray on Jan. 5 outside his home in Jefferson City.

Rick Branstetter, of Jefferson City, has lived in a lot of places and worn many hats. One role that has stayed consistent for the last 50 years - his ownership of a silver 1970 Corvette Stingray.

"Nobody owns a car for 50 years these days," his wife, Betsy Branstetter, said.

To know the car, you have to know about its driver. Rick has been working since he was 12, selling papers outside the Cole County Courthouse for a penny. He started teaching Sunday school at First Presbyterian Church at age 18 and has since taught all over the United States. He was a part of the first Capital City Court-Appointed Special Advocates group, a facilitator for Council of Drug Free Youth, a division sales manager with Avon and has volunteered a lot since his retirement.

He wouldn't call himself a teacher, though.

"If you had asked any of my high school teachers if I would make a good teacher, they'd say no," he laughed.

Even so, he has been one, especially to the young men he's mentored for the past 25 years.

To explain what that looks like, he'll tell you a story about where the word "mentor" came from. During the Trojan War, Odysseus, king of Ithica, was looking for someone to look after his son, Telemachus - who was 10 - while he went off to war. He entrusted a wise person named Mentor to protect and guide Telemachus.

"He did the role of the father," Rick said.

Rick has been pulled aside by mothers in need of a father figure for their son over the years, from those who need someone to be a consistent presence to those who just need him to teach them how to shave.

Rick has been the kind of mentor he needed as a child: He was shy growing up and benefited from having mentors in his own life. He's seen children who were barely passing their classes make it to the honor roll, boys who needed spiritual direction grow in their faith and go on to have families of their own.

"The space of a healthy environment helps," he said. "They listened to me more than they would listen to their parents, and I was the same way when I was their age. I tell everybody, 'You need to have a mentor at work and church, where you find somebody who is willing to invest in you.'"

Rick tries to focus on mentoring one young man at a time, but if a mother reaches out who needs help, he rarely hesitates to step in.

The Corvette has played a role in all of this - whether it was a ride to the store or a ride to prom, it's been a part of the lives of those he's mentored.

"It's an ego trip when you drive by the elementary schools because the kids holler, they will wave and you can see them poke each other and say 'Look at that!'" he said. "They don't do it in the Ford Focus."

His journey with the car began like some romances: love at first sight.

Rick was going through pilot training at Randolph Air Force Base in San Antonio the night he walked by the officers club. He can still see it clearly: a 1969 Stingray in silver.

"It was nighttime, so it caught all the lights of the buildings," he recalled. "I looked at it and went, 'That's what I want.'"

When he was stationed in Ho Chi Minh City, formerly Saigon, during the Vietnam War, he vowed to get the same Stingray.

"When I was in Saigon, I said, 'If I make it through Vietnam, this will be my gift.'"

He had the chance to buy it as a pilot in Pleiku, Vietnam, from a guy who was selling General Motors cars - if he ordered one there, they would have it ready for him when he returned to the United States. He wrote a check for $4,986 and picked up the 1970 model in St. Louis two months later.

It remained his first and primary car during his three years stationed at Richards-Gebaur Air Reserve Station in Kansas City, then went on to turn heads wherever he went.

It doesn't have power steering, but Rick's father advised against getting any fancy work on the car - "the more you have, the more will break" - but he splurged for air conditioning when living in Texas.

How fast can it go? Rick's response, especially when children ask, is: "It goes as fast as the speed limit."

The car has played a role in Betsy's life, too: Rick said it swept her off her feet.

"I courted you with that car. You fell in love with the guy with the Corvette," Rick said.

"No, I fell in love with your smile," Betsy replied.

"Through the windshield," Rick joked.

Betsy tells the story like this: She was 24 when Rick left the Air Force and they met, and she said it was cool having a Corvette back then. She felt cool in it, too. But she fell for Rick watching Pistol Pete Maravich play at a basketball game in Kansas City.

"I looked at Rick and said, 'That is the cutest guy I've ever seen,'" she said.

After having children, they had to buy another car to fit a car seat. The Ford Focus has come in handy for Rick, who is better able to drive around his mother, now 96, and even himself - the Corvette seats are low, so it takes most people a minute to climb out of it.

"It's difficult for me, and I'm in pretty good shape - I mean, I play pickleball," Rick said.

The future of the Stingray

The question is, would he ever sell it?

Some of his mentees have expressed interest, but he has cautioned them it takes time and finances to keep a car for so long. However, Betsy said Rick does offer to sell it - and is often met with the same response.

Rick said it would be very difficult to sell the car, his "gift" for making it back from Vietnam.

He still drives around his four grandchildren in it every summer, as each one takes a turn riding in the two-seater with "Pawpaw" the way there and back. It still turns heads, still makes people ask how fast it goes, and is still a ride home from school for any mentee who needs it.

Betsy said although their children haven't expressed interest in it, it's fueled their love for older cars and continues to impress her.