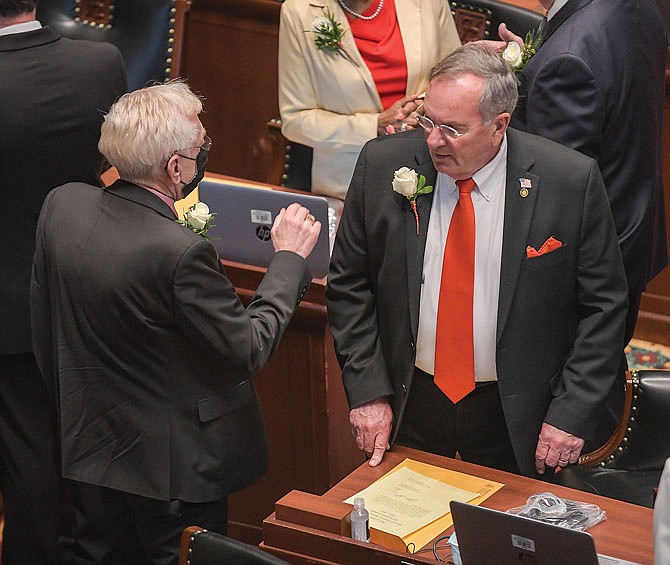 Reps. Rudy Veit, left, and Dave Griffith, both of Jefferson City, visit Wednesday prior to the start of official activities as Missouri's 101st General Assembly got underway in the Missouri House of Representatives.

Through the ongoing COVID-19 pandemic and the unfolding unrest at the nation's Capitol, Missouri lawmakers met Wednesday for the first day of this year's regular legislative session at the state Capitol in Jefferson City.

The ongoing threat of coronavirus meant health workers taking people's temperatures and asking health screening questions upon entrance to the Capitol. Many people wore masks but not all.

The threat also meant instead of newly-elected or re-elected state senators walking up the aisle of their chamber to be introduced and sworn in, they and their introducers - fellow senators - remained at their desks.

Republicans have the majority in the 34-member body.

Much of the rest of the day's events in the Senate were uneventful. Temporary rules for session were adopted that were expected to be replaced with formal ones today. Some committee memberships were announced, but most will be next week, with committees to start meeting the week after that.

However, the tragedies and trials of last year and the ones already underway this year still had to be acknowledged - in both legislative chambers.

Schatz said, "Missourians are exhausted" after a pandemic, unprecedented uncertainty, and rapid changes in society and the economy.

He said there's hope the worst is behind the state, but there will be challenges ahead, and "it's time for us to lead and to deliver."

In the state House of Representatives, Secretary of State Jay Ashcroft issued a statement as the body's speaker - a position the secretary fills, per tradition, until a temporary speaker is elected - and he said the last time he stood before the chamber, not one of the people in the room could have anticipated the challenges the country would encounter last year - the global pandemic, racial strife, riots, families financially devastated.

"And an even greater hyper-political and polarized environment than we have ever seen," Ashcroft said.

Missourians persevered and the state became one of the brightest spots in the country, he said.

"Public access to and public confidence in the integrity of our elections are fundamental components of enduring freedom," he said.

However, he questioned the integrity of other states' elections.

Unforeseen challenges of 2020 disrupted the sacred democratic process in many settings across the country, he said.

Missouri was able to conduct elections in a manner that was able to reinforce, rather than undermine confidence of citizens, he said.

"Even as we look back on our seamless election process, our country remains in turmoil," Ashcroft said, "over how other states' elections were run."

He questioned how some government officials, even in the Missouri House of Representatives, would "embrace and mimic election processes that we have seen in Georgia, Arizona, Pennsylvania and Wisconsin. These states fail to conduct their elections in such a manner that neither successful nor unsuccessful candidates can demonstrably verify the results."

He did not mention the states have verified their results and scores of courts have thrown out suits challenging them.

About the time Ashcroft was questioning election processes in other states, supporters of President Donald Trump were storming the U.S. Capitol, interrupting the Electoral College vote count.

After the Missouri Senate concluded its business for the day, leaders of both parties commented on the unfolding unrest in Washington, D.C., and referred to the storming of the U.S. Capitol as domestic terrorism.

Senate Democrats canceled their post-session press availability Wednesday, with Minority Leader Sen. John Rizzo, D-Independence, saying in a statement: "Domestic terrorists are waving Trump flags and storming the U.S. Capitol in an act of modern treason against the United States of America. I am calling on all Republican office holders in Missouri to denounce this terrorism and the inflammatory rhetoric spewed from the President of the United States that has led to this moment."

Senate Majority Leader Caleb Rowden, R-Columbia, had a similar reaction to the news from the U.S. Capitol, telling reporters after session Wednesday: "It's domestic terrorism. You might as well call it what it is. I think that the folks that are using this method to try to prove a point are doing way more damage than they can ever even comprehend or fathom in the moment."

Rowden said blame is ultimately to be shared among both main political parties for the division in the country, but he cited Missouri's Legislature as an example of how things should work, where lawmakers of almost entirely opposing views are happy to work with each other.

"If we cannot figure out a way to operate with a set of shared facts and a shared purpose, we've got a real problem," he added.

"Right now, there is an armed insurrection taking place in our nation's Capitol. I doubt any of us ever thought we would see this day," Quade said. "But what started as an embarrassing denial of reality by a leading candidate desperate to cling to power turned into a violent coup attempt."

Republican elected officials, including many in Missouri "actively pushing the lie of a Trump victory over the past month" may have made this inevitable, she continued.

The actions will damage the democratic system for years to come, she said.

She called on Republicans to denounce the action, although they had not mentioned it.

House Republican leadership later released a statement that said, "The violence and destruction that occurred today in our nation's capital is unacceptable. Peaceful protests are an important part of free speech, but violence can never be tolerated."

State representatives were sworn in as the protests in D.C. grew violent Wednesday.

The House's assembly this session (163 members) is made up of 48 Democrats and 114 Republicans. There is a vacancy in House District 45, which encompasses much of Columbia, after the resignation of Rep. Kip Kendrick, D-Columbia.

The chamber elected Sara Walsh, R-Ashland, as the temporary Speaker of the House.

"To my colleagues, thank you for your support and for giving me this incredible honor," Walsh said.

She also thanked her family for love and support and her husband for always standing behind her.

"We are governing in a time of unprecedented challenges," Walsh said, "that have created extraordinary hardships throughout our state, for the people in our districts."

Lawmakers owe it to all Missourians to provide an unparalleled level of effort as they remove the burdens complicating lives.

"I'm excited to be part of the good work that I know we will address," Walsh said.

Under her leadership, the body made official the selection of Rob Vescovo, R-Arnold, as Speaker of the House.

Lawmakers of both parties in both chambers have their priorities for session, but it's likely their ability to make progress on anything will be determined day-by-day and week-by-week by the pandemic - Rowden said as much.

Schatz said there was not a formal testing strategy in place to monitor potential spread of coronavirus, but he added, "I think there are opportunities for some of that to occur," if necessary, and he's spoken with Gov. Mike Parson's office about it.

"If we start seeing a number of cases, a spike in cases, we may try to look at some opportunities to do some testing in some way, but we haven't put anything in place at this time that would accelerate or create an environment for testing," he said.

Legislative leaders said precautions will be in place to avoid the spread of COVID-19 during the Republican-led Legislature's roughly five-month annual session, although rules primarily apply to staffers and not lawmakers.

House and Senate administrative staff must wear face masks, but that's optional for lawmakers. The Senate is limiting staff seating in committee rooms, and the House is allowing employees to work from home when practical.

Schatz, who himself tested positive for COVID-19 but has since recovered, said health care and other essential workers are on the frontlines daily. He said lawmakers are "going to have to do the same thing" and find a way to work safely.

"Maybe by the middle of summer we might have this thing a little bit further behind us," Schatz said. "But until then, I plan on us moving forward and continuing business in the best way we can."

The Capitol is still open to the public, though public seating will be spaced out in House and Senate committee hearings for social distancing. The Senate also provides live audio streaming of its committee hearings and sessions, and the House livestreams video of its public meetings.

"As far as I have been told, it's going to be business as usual, which is obviously very unacceptable to me," she said.

This article was edited at 3:25 p.m. Jan. 7, 2021, to correct the number of newly elected senators introduced.