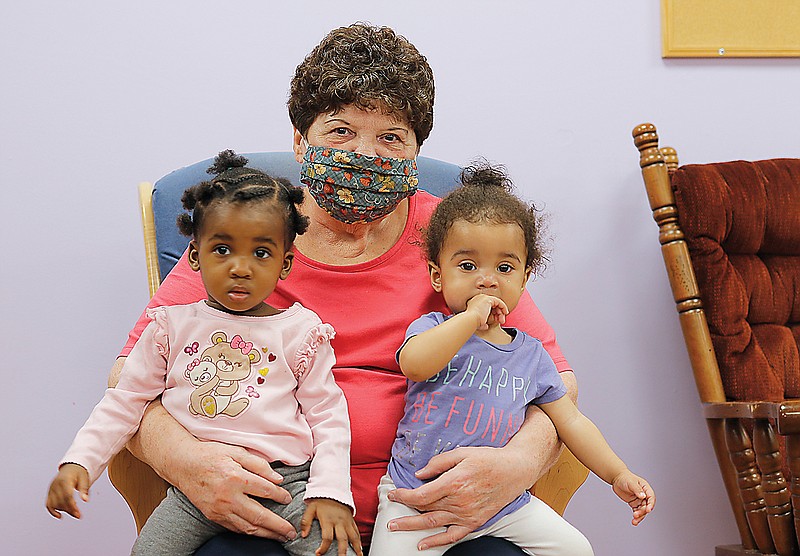 Carolyn Fluegel sits in a rocking chair with Harmony and Harmony's cousin, Ava, both 1, on Wednesday at Little Explorers Discovery Center. Fluegel has been volunteering at the daycare center for 14 years.

As she was about to retire, Carolyn Fluegel knew she needed to find a pastime that would keep her busy and allow her to give back to the community.

While reading the newspaper, she came across a story about a woman who volunteered at Little Explorers Discovery Center and spent time rocking and holding the babies.

"I decided whenever I retired, that's what I'm going to do - rock and hold the babies," Carolyn said. "After seeing that article in the paper, I knew what my calling was."

Shortly after retiring from the state of Missouri in 2006, she called the child care center and said she would like to volunteer there.

"She said, 'Well, if you want to come in and visit, come on in,'" Carolyn said. "I came in that same day; she let me visit the room. I've never left since."

Carolyn Fluegel has volunteered at Little Explorers Discovery Center for 14 years. She spends four hours every weekday morning in a colorful room filled with children ages 2 and younger. She feeds them; reads to them; sings to them; plays with them; puts bibs on them and buckles them in their chairs for lunchtime; puts cots down for the older children for naptime; and most of all - rocks and holds the babies.

"I have been truly blessed, and I've been enjoying every second of it," she said.

A couple years ago, Carolyn's husband, Keith, began volunteering with her after closing his business and suffering a heart attack leaving him with health problems. They moved in with Carolyn's son and daughter-in-law, and Keith began to get depressed as he was home all the time with nothing to do but play computer games. One day, his son-in-law had a doctor's appointment, so Carolyn brought Keith with her to Little Explorers.

"He was determined to come back," Carolyn said.

Carolyn said volunteering there has been the joy of their lives, and it has given them a purpose and a reason to get up in the morning.

"He smiles from the time we walk in the door until we leave," she said. "He just loves those kids, and the kids love him, and it made his dementia even a little bit better. He's happier."

Their grandchildren live in a different state, but the Little Explorers staff and children have become their second family. Everyone there - children and teachers - call them grandma and grandpa.

"I love each and every one of them like they're my own, and I consider them my family," Carolyn said. "We love those kids to death, and we love the teachers. It has been a true blessing for us. It has really enlightened our life."

As they walk in the door in the morning, the children wave, run or crawl toward them, some of them yelling, "Grandma! Grandpa!" and hugging them. Sometimes the children take them by the hands and lead them to their rocking chairs, where they "hold, love and rock the babies."

"Just seeing the joy in their faces, it has been tremendous," Carolyn said.

The babies play, laugh, scream, babble, and sit on "grandma" and "grandpa's" laps or lie in their arms and cuddle.

"I just love each and every one of them, and I'm so thankful that God has granted me this time on Earth to be here and to help these kids and to love them and help care for them and maybe change their life," Carolyn said.

Carolyn said her biggest passion and motivator is making a difference in these children's lives and letting them know they're loved.

"I want kids to have the love that they deserve," she said.