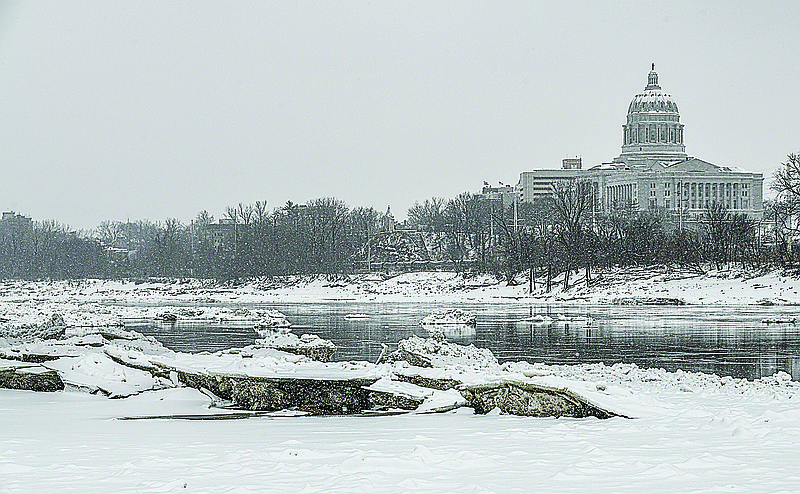 "You can see the impact by looking at the readings from Tuesday night on the river gauge at the bridge," Fuchs said. "Levels were around 4 feet at 10 p.m. then started to noticeably drop around 10:15 p.m. and continued to fall throughout the day on Wednesday. It went below 0 feet at 1 p.m."

Records available to the NWS show the record low level for the Missouri River in Jefferson City occurred in February 1908, when it hit -1.1 feet below zero gauge, Fuchs said.

As of Wednesday evening, the river was at -0.19 below zero gauge.

When a river gauge reads zero or in the negative numbers, it does not mean the river has gone totally dry or is running below ground, Fuchs noted. It means the gauge is reading at or below the agreed-upon zero level.

Missouri Department of Transportation and the U.S. Army Corps of Engineers in Kansas City officials confirmed they were aware of the ice formation but did not believe it would cause any unforeseen problems.

MoDOT spokesman Adam Pulley said the department would monitor the situation, and it's not expected to cause any problems for Missouri River bridges.

Although there has been ice moving on the river due to the recent freezing temperatures, Jefferson City has not been notified of any problems with water service, city Operations Director Britt Smith said. He noted the water intake put into operation by Missouri American Water in December 2011 takes water from the bottom of the river.

"A lot of these records we see are ice-related, and jams can bring a river down in a hurry," Fuchs said. "The good news is temperatures will be warming up in the next few days, and that should break up the formation soon. You often see ice jams on creeks and some larger streams, even at times on the Osage River, but not on the Missouri River. That's different."