Group homes in Missouri struggle to get vaccine 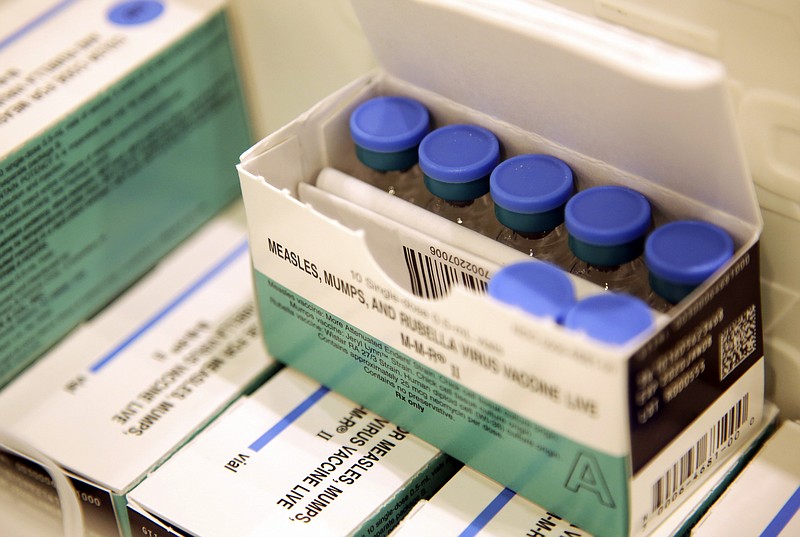 FILE- In this March 27, 2019, file photo, measles, mumps and rubella vaccines sit in a cooler at the Rockland County Health Department in Pomona, N.Y. In social media’s battle against misinformation, bogus claims about the dangers of vaccines are the next target. With measles outbreaks wreaking havoc around the world, Facebook, Pinterest and others are trying to put the genie back in the bottle, even as they are hesitant, even unwilling to acknowledge outright responsibility for spreading falsehoods. (AP Photo/Seth Wenig, File)

WEBSTER GROVES, Mo. (AP) - Maria Schroeder was worried and increasingly anxious. It was weeks after coronavirus vaccine distribution had started in Missouri, and she still had 11 intellectually disabled residents who required 24-hour support - and no vaccine.

She expected good news from the state or elsewhere about when and how to get a vaccine for residents and staff members, alike. Then, finally, in mid-January, the state sent her a list.

But Schroeder, assistant director for L'Arche St. Louis, which runs three group homes in St. Louis County, quickly realized the list was cluttered with every brick-and-mortar CVS, Walgreens and Costco - locations that, while approved to vaccinate, often had no doses of vaccine.

Over the next two work days, Schroeder made 200 calls, the St. Louis Post-Dispatch reported.

"We're a very small agency, we don't have a lot of connections," Schroeder said. "It was very obvious if I didn't do this, we weren't going to get vaccines."

The leaders of St. Louis-area group homes that adults with intellectual disabilities have struggled to secure doses of COVID-19 vaccine for their staff and clients. With little help from the state, some said, the group-home leaders began a dogged and sometimes desperate hunt. They made hundreds of phone calls, sent staff driving across the state, and cut deals with colleagues, health care services, and anybody else they could reach.

Most have now gotten at least some doses. But their stories illustrate the intense shortage of communication, distribution and vaccine itself, especially in the rollout's early days.

Even for the high-risk.

The Missouri Department of Mental Health did not make staff available for an interview for this story. Agency spokeswoman Debra Walker said in an email the department understands the challenges group homes face in trying to find vaccine.

"DMH has encouraged providers to take the lead and not wait for a vaccinator to contact them," she said.

The nonprofit serves approximately 5,000 disabled clients in Missouri, about 300 of whom reside in group homes in the St. Louis region. Three of its disabled clients and two of its staff members have died from the virus over the course of the pandemic.

The organization devoted three full-time employees solely to trying to track down vaccine, CEO Wendy Sullivan said. She said Easterseals' operations near St. Louis received a round of about 250 shots Thursday, with roughly 50 vaccines going to clients and the rest going to staff members. Now, just about every staff member who had wanted a vaccine has received one, she said. However, "the overwhelming majority" of disabled clients are still missing their shots.

The organization has encountered confusion, and conflicting policies, in different parts of the state, Sullivan said. In Springfield, for instance, they've been able to get vaccinations, but other places have questioned their eligibility for doses.

"Everyone is confused about who's eligible when," she said.

Sullivan said vaccine distribution has tended to be worse around St. Louis.

"It varies greatly by region," she said. "St. Louis has been much slower."

Professional leaders of area group homes - also called "community living" or "supported living" settings - said their residents are highly vulnerable to diseases like COVID-19. In most circumstances, staff members frequently come and go, presenting potential routes for transmission. And one infection in the home can quickly transmit to others.

Moreover, many clients already have underlying health conditions. And they sometimes lack an understanding of how to keep themselves safe.

"They are high-risk," Sullivan said.

So leaders were surprised when they didn't see a state system linking specific vaccine vendors to prospective recipients high on the list of eligibility.

Instead, on a recent conference call, a Department of Mental Health official told group home leaders to be "scrappy."

It frustrated some on the call. They saw it as just another example of the state ignoring group homes' needs.

"It's not the first time that we've felt like we've got to get 'scrappy' to get this done," said Barb Griffith, CEO of St. Peters-based Community Living. "I was looking to (the state) to usher this in in a systematic way, to help those organizations that they provide funding to. But it didn't happen that way."

Schroeder, from L'Arche, called it "infuriating."

"It just felt like an abdication of responsibility and a misunderstanding of how grave the situation is," Schroeder said. "We've been in a life-and-death situation since March."

"It just gives the message of 'Every person for themselves,' you know?" she said "'Good luck.'"

About half the staff and nearly all of the 50 residents at Community Living chose to be vaccinated. Griffith said St. Charles County provided some doses. She tracked down "leftover" vaccine at Compass Health Network, a nonprofit health care system in the area. And her organization partnered with another home on a vaccination clinic.

Roughly 90 percent of the clients at Emmaus Homes, which runs 65 residences across Warren, Franklin, St. Charles and St. Louis counties, have received doses. It had "first-round access" to the vaccine in late December, and ran the clinic attended by many of Community Living's vaccination recipients.

Print Headline: Group homes in Missouri struggle to get vaccine