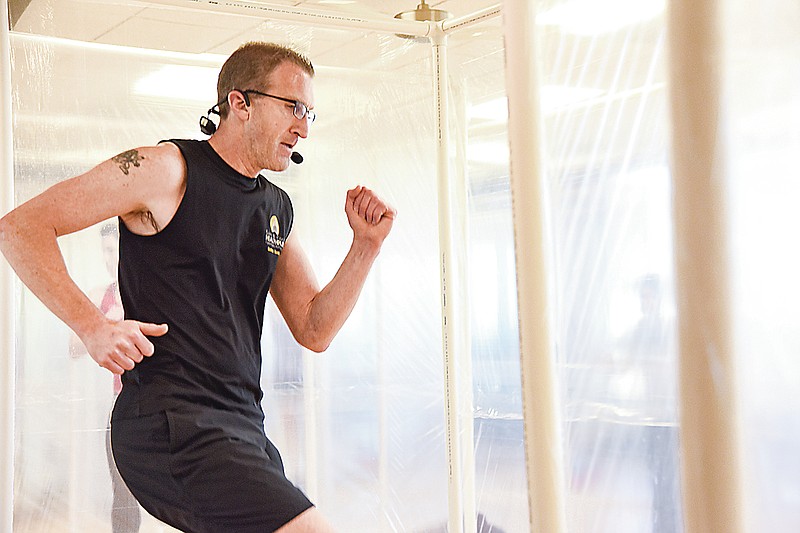 Sam Marshall loved going to work every day as an environmental chemist and a fitness instructor. He woke up excited to interact with others and face the challenges of the day.

But gradually, he became somebody he didn't even recognize, and he didn't know why. He lived his life in a haze, often not able to muster the energy to speak. He struggled to get out of bed and go to work. He was moody and unhappy, and no one wanted to be around him.

He began experiencing physical pain that would come and go. As a fitness instructor who taught 10 classes a week, he brushed it off as muscle spasms. Deep down, he knew something was wrong.

"I've always been good about going to doctors if there's something wrong, but for some reason I just was really scared at what it could be," he said.

Eventually, his wife noticed his left hand was shaking as he was teaching a class, and Marshall finally decided it was time to see a doctor. The doctor prescribed him medicine, but his symptoms got worse and worse.

"On the left side of my body, everything was getting rigid," he said. "I was losing range of motion, and the way I walked was different."

In March, about a year and a half after he started noticing symptoms, he saw a neurologist who diagnosed him with Parkinson's disease and told him to find another job.

"It was basically, 'You have Parkinson's disease, you're going to have to find another job, here's medicine, see ya,'" he said.

He left the doctor's office in shock, feeling as if everybody was staring at him. He called his wife to tell her he had just gotten the worst news of his life.

"I was in shock for days," he said. "I remember going back to work and just sitting in my chair, and I didn't leave my chair for three hours. I just sat there."

This was during the onset of the COVID-19 pandemic, when everyone's normal lives had already come to a halt.

"That just devastated me," Marshall said. "It was like, what am I going to do?"

He decided he wanted a second opinion, so he went to a different neurologist who gave him news that lifted his spirits.

"He just wrote down what I needed to start doing, and he was very positive and said, 'You can still continue to do your classes, and you're in great shape.'"

In July, Marshall had a deep brain stimulation surgery that included three separate procedures where surgeons implanted bolts, electrodes and a simulator in his brain. They also implanted a pacemaker into his chest, a small device that treats his heart tremor.

About a month after the surgeries, he felt like a new person - his old self - and was teaching his fitness classes again. He began getting up each morning ready to meet the challenges of the day and said he feels grateful to be himself again.

Now, he can inspire others to stay strong and keep going, no matter what they're going through.

"It's a gift that I got Parkinson's - because I have the ability to inspire people," he said.

Marshall learned from his parents to never give up, to go for his goals and to be the best he can be - and that's what he does each day.

And now he is no longer afraid.

"I'm ready to meet it head-on and do my best to keep going," he said.

Marshall has been a fitness instructor at Capital Region Medical Center's Sam. B Cook Healthplex for about eight years, teaching classes that are choreographed to music.

His motto is, "If you're moving, you're improving." His fitness classes help his stability; keep him on his toes and keep him active, healthy and strong - but the main reason he loves it is because he gets to help others.

Motivating others through his fitness classes motivates him and helps him stay strong, physically and emotionally. He said he doesn't challenge the class members - they challenge him.

Even if he's having a bad day, being able to help people through fitness in a supportive, family-like atmosphere and hear people thank him for the workout motivates and fulfills him.

"This job gives me everything - it gives me interaction; it gives me teamwork; it completes me, essentially," he said. "It's exactly what I need in my life, and I'm glad I can do it."

Marshall's goal is to become certified to teach Rock Steady Boxing, a fitness program designed specifically for people with Parkinson's. He said he looks forward to helping others with Parkinson's to keep going and not give up.

While his battle with Parkinson's has been tough, he has a positive outlook. He's accepted it, he makes the best of it, and he believes it's God's plan for him.

"I feel blessed to have it because I can do so much to help people just in being positive," Marshall said. "What I've learned is I'm not going to die from it. You just have to keep living. Everybody has problems in life, but you have to just accept what you have and move on and continue to be who you are."