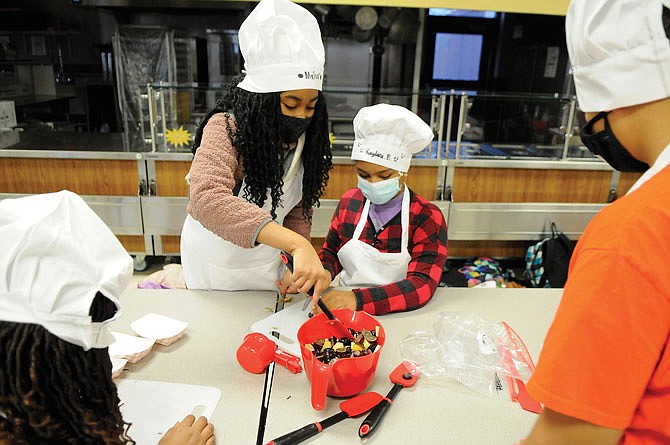 Fifth-graders in white aprons and chef hats sat next to each other in the cafeteria Thursday, focused and eager to learn.

After learning kitchen safety and going over expectations, the East Elementary School students practiced cutting potatoes, choosing if they wanted to dice them or cut them into french fries or potato chips. Then, they cut up a variety of fruits and put them into a bowl to make a fruit salad.

At first, JC Healthy Schools Coordinator Kelsey Chrisman didn't think the club would be able to start again this year because of COVID-19 restrictions. But students kept asking her about it, so she was determined to make it work.

"Whenever the kids give you that type of feedback, that's the really rewarding part," Chrisman said. "When they're asking for a cooking club or a fitness club or a garden club, that's when you know."

"We just went back to the drawing board and said, 'How can we get this done?'" Chrisman said.

The club has about 20 students this year, more than half of the fifth-grade class. Students in the club stay after school one day a week for an hour and learn how to make tasty snacks.

The students range from beginners to pros, but each is eager to learn new skills.

"Some of them have probably more cooking skills than I do right now, but some of them didn't know how to hold a knife at all," she said.

Because of COVID-19 restrictions, the students can't use the oven, stove or microwave. But Chrisman found a variety of recipes they can make, from salads to no-bake cookies. She teaches students that while eating healthy is important, they can have a sweet treat every once in a while.

"A personal goal of mine is to teach adults and students the art of balance," she said.

The students take the cooking club pretty seriously, Chrisman said. To be accepted into the club, they had to write a one-page paper or make a two-minute video about why they should be selected and why they wanted to join.

Eichholz said some of the comments in the essays were eye-opening.

"Being in fifth grade, they are given more family responsibilities," Eichholz said. "They watch their siblings after school, and one of them said they wanted to be able to know how to prepare healthy after-school snacks for themselves and their siblings."

Another student said she was glad they were offering the cooking club this year because she was afraid it would be canceled because of COVID-19.

"So much has been taken away socially," Eichholz said. "They're not able to participate in after-school things as much as they normally would have if things were back to normal, and so she was thankful that we were offering this to them. I was happy to see that she took that perspective."

While they made only one recipe Thursday, they'll make two or three snacks during each class in the coming weeks. On the last day of the program, a graduate student from the University of Missouri who is earning a master's degree in nutrition will make a recipe with the students and teach a lesson on how to create a healthy plate of food.

The students had so much fun Thursday they weren't ready to leave yet when their parents were there to pick them up, Eichholz said.

"Overall, they had a very good time," she said. "It seemed like we blinked our eyes and it was over."

After working hard to prepare the food, the best part is sitting down and eating the snack they made together, Chrisman said. While enjoying their fruit salad, the students talked about how good it was, how fun it was to make and how excited they were to make it at home.

"Everything just seems fast and furious because we're all doing something, and then when it's over and we all sit and eat it together at the same time, that's when they get really excited," she said.

Many of the students cook for their families often, but this club will add a variety of lifelong skills to their repertoire. And for some, they are learning to cook for the first time and will now be able to bring these skills home with them.

"They're very positive about it, and it gives them a great opportunity to interact with their peers in a non-academic setting," Eichholz said.