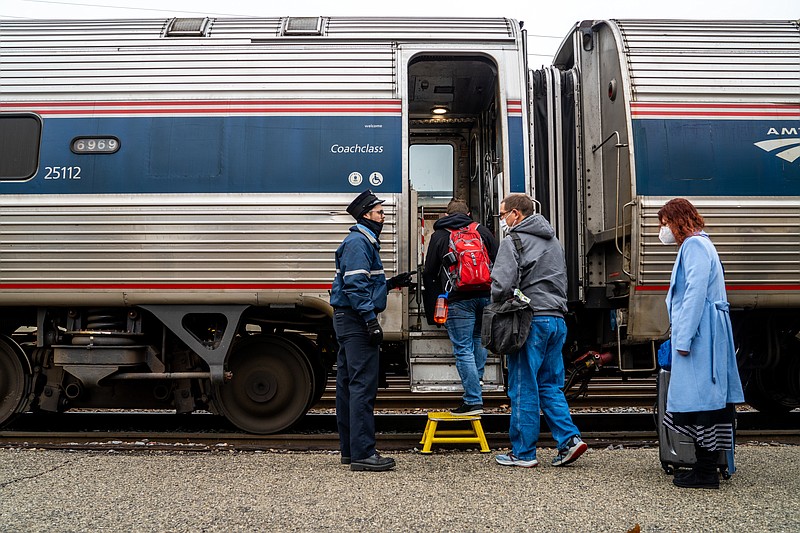 Passengers load Dec. 30 onto a westbound Amtrak Train at the Amtrak Station in Jefferson City. (Photo by Ethan Weston/News Tribune)

State and federal COVID-19 relief that powered two Amtrak round-trips across the state per day is losing steam and coming to a stop Monday.

The Missouri River Runner Amtrak train service will be back to once daily round-trip service across the state Monday with one train leaving Kansas City in the morning and one leaving St. Louis in the afternoon.

MoDOT Director Patrick McKenna said, “We knew we’d be up against it,” in regards to Amtrak funding. McKenna said lawmakers told them they were not to go into arrears with the service.

“Estimates in the last couple of months showed we’d go into the red by $2.5 million if we retained two trains from January to June,” McKenna said. “Knocking back to one train we think will fit in the budget resources we have. We didn’t have an option — we had to balance the account.”

In the spring of 2020, the River Runner, due to the COVID-19 pandemic, went down to one daily round trip. In July, the state and Amtrak restored the second daily roundtrip thanks to funds from the state and the federal American Rescue Plan (ARP) for COVID-19 relief. The funds were to run through December.

McKenna said, considering the market issues associated with the pandemic, getting back to more than 80 percent of pre-pandemic levels of ridership with the two trains, which was one of the strongest levels in the country, showed there is a demand for passenger rail service in Missouri.

“I realize it makes it tough for some members of the Legislature to support a service that doesn’t impact the entire state from a customer prospective, but it does provide economic benefit across the state,” McKenna said. “They’d like to see the service not subsidized in any way, but that’s probably not realistic for this service. All modes of transportation have some degree of governmental support.”

Over the last four years, the ridership on the River Runner trains has fluctuated thanks to various factors.

MoDOT figures show 2018 was the last “normal year” for the service when there were no unexpected interruptions and there was twice daily cross-state trains. From May through November of that year, ridership stayed around the 15,000 mark each month, with the low being September with nearly 13,500 riders and the high occurring in July with nearly 17,400 riders.

In 2020, with the COVID-19 pandemic forcing Amtrak to make changes to fit health requirements, the service went down to once-a-day round trips and passenger counts went from a low of just more than 2,000 in May to high of only 5,500 in October.

The COVID-19 issues remained at the start of 2021, but as regulations changed, numbers started coming up, with just more than 7,000 passengers in May. However, when the twice-daily train service began again in July, the numbers went to nearly 11,700 that month to more than 14,100 in October.

While they do not have measurements to show the economic impact Amtrak makes on the Capital City, Diane Gillespie, executive director of the Jefferson City Convention & Visitors Bureau, said you can see the service is used a great deal.

“During the legislative session, several lawmakers come to town from Kansas City and St. Louis on Amtrak,” Gillespie said. “In the spring and summer, we have visitors touring our site and some spend the night or are able to go back home the same day thanks to the train.”

Gillespie said they are starting to request ridership numbers on a monthly basis from Amtrak so they can look at those and help them have a better idea on the impact the service has on the city.

A group representing towns along the River Runner route are hoping to convince lawmakers to bring back a second daily cross-state train in the near future.

MoDOT organizes the Missouri Rail Passenger Advisory Group (MORPAC). It’s made up of people from the communities where the 10 stations on the River Runner line are located.

Tammy Bruckerhoff, Hermann’s tourism director, has been on the MORPAC for the last four years. She said they have organized a legislative committee out of that group, which includes Sen. David Pearce, R-Warrensburg, in an effort to get lawmakers to give more state funds, as well as ARP money and any other unallocated funds, to keep the second trains and to sustain that service in the future.

McKenna said they have a commitment to retain the Amtrak service that was made when additional stops were created along the River Runner line years ago. He said they were only part-way through the multi-decade deal which had $50 million to pay capital costs for improvements to the rail line and stations. He said they still owe about $30 million.

“We hope there won’t be too much of a break, and I hope we could see the second-daily round trips resume sometime in March,” Bruckerhoff said. “So many people have begun to realize how easy it is to travel to Hermannn, Jefferson City, or any one of the other stops along the route and not have to worry about driving.”

Last fall, Jefferson City, Hermann, Sedalia and Washington all used some grant monies from the Division of Tourism to promote bike riding on the Katy Trail and riding Amtrak to get back to wherever your starting place on the trail might be since the River Runner route follows much of trail.

“There’s still many Missourians who are just getting introduced to Amtrak,” Bruckerhoff said. “We have people come to Hermann from Rolla and Mexico and find out they can ride east or west of us to do more exploring. I think we’ve just begun to get more ideas to promote Amtrak and the opportunities it can provide.”

McKenna said bringing the second cross-state trains back into service would not be as easy as some might think.

“There are labor and schedule constraints that have to be taken into account,” McKenna said. “If the legislators were to be willing to give more funding, that also would take time to get in place. The normal legislative process would mean we couldn’t start the second train until July 1, maybe a few months earlier if we got a supplemental

“We’d prefer to start on July 1 because those last six months of the year are when we’re seeing more people traveling so there are more tourism opportunities,” McKenna added.

He also said using ARP funding again to help get the second train back has been on the mind of some lawmakers who are directly affected along the River Runner route.

“But I can’t read the will of the Legislature,” he said. “Amtrak is also looking at using federal funds approved for infrastructure needs to expand passenger rail service in parts of country, but that would require support.”