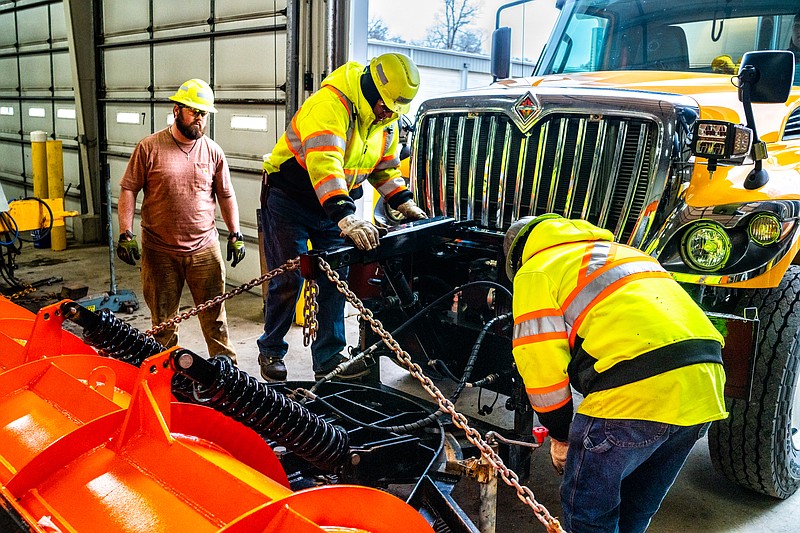 Roger Saleny, Grant Kleindienst, Mike Blankenship and Tyler Ford attach a plow to the front of a MoDOT truck on Wednesday in Jefferson City. The forecast for Saturday calls for possible snow or freezing rain.

Two months ago, Missouri Department of Transportation officials said they were worried about not having enough drivers to push the snow off the roads.

With the forecast for Saturday calling for some form of winter precipitation to start off 2022, MoDOT's snow plowing concerns haven't gone away.

"We're still dealing with high staff turnover rates and many vacant positions," MoDOT Director Patrick McKenna said. "On top of that, you have to add any quarantined employees with COVID. The urban areas are where our turnover is high and our ability to replace those employees is low.

"The market for drivers with a CDL (commercial driver's license) is still very competitive," he said.

Because they are still several hundred employees below what they need in order to cover more than one shift in a statewide storm, McKenna said, "If a widespread winter storm lasts more than one 12-hour shift, we will not have enough employees to fill all the trucks on the second shift, and therefore it will take longer to clear the roads."

Some contingency plans have been put in place. If an area of the state is hit by the flu or COVID-19 or whatever the issue, then they'll have neighboring crews come to help that area out. If a storm would only hit a section of the state and they need help, they'll move crews from other areas to help out.

Despite the challenges, the top priority for MoDOT in a snowstorm is clearing all interstates and higher volume highways.

"Our goals will be the same -- it will just take longer to do," McKenna said.

MoDOT usually clears 5.6 million miles of road in winter. They typically strive to have roads back to near-normal conditions after the storm has stopped, usually in three to four hours. This year, it will probably take six to eight hours on major roads and an extra 12-24 hours on some of the minor roads.

"We're going to try to be very transparent as we plan for the storms," McKenna said.

Locally, Jefferson City and Cole County Public Works Departments believe their staffs are ready to hit the roads if needed.

"We are in good shape and fortunately fully staffed," Jefferson City Operations Director Britt Smith said. "Our salt supply is fully stocked. Staff has been working to set up the plow trucks to ensure all is ready for whatever comes this weekend."

Smith added that seasonal staffing is less of an issue since the city relies on its regular full-time staff for road-clearing duties.

Cole County Public Works Director Eric Landwehr said all of their equipment has been checked over and repairs were made. They have had one retirement and one resignation recently so they are down two full-time positions.

"When it comes to winter operations, we have several employees trained to plow but don't have a regular snow route because of the normal job they do," Landwehr said. "So we are fine for now and will be able to have every truck out. Hiring new employees has been a challenge for us like it is everywhere, but we are OK right now."

Landwehr and Smith said as of today they didn't have anyone on their staffs out due to COVID-19.