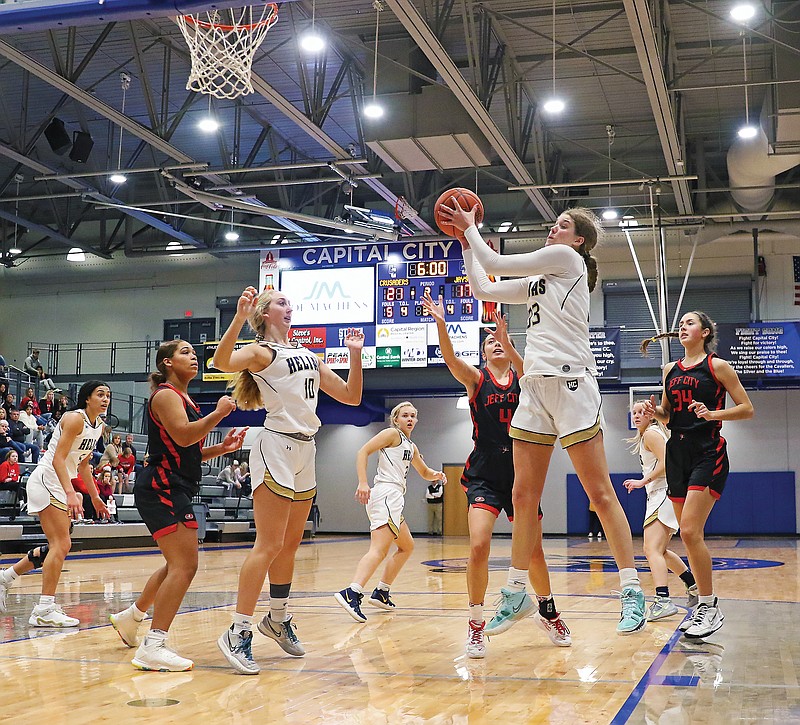 It was familiar territory for the Helias Lady Crusaders.

The Jefferson City Lady Jays rallied from a seven-point deficit to take a 51-49 lead against the Lady Crusaders in the fourth quarter of Wednesday night’s title game in the Jefferson Bank Holiday Hoops Tournament at Capital City High School.

It was third time in three tournament games the Lady Crusaders had trailed in the fourth quarter. Helias rallied to beat St. Joseph Benton 41-31 in Monday’s opener, then used a big run Tuesday night to sprint past Blue Springs South 60-46 in the semifinals.

The Lady Crusaders had one more run in them and it finished with a championship as Helias scored the final eight points to come back to defeat Jefferson City 57-51.

“Three games in a row, that says a lot about these girls and their willingness to never quit and win basketball games,” Helias coach Garrett Wiggans said. “We beat a very good Benton team, a very good Blue Springs South team and a Jeff City team that’s good, I don’t care what their record says.”

The Lady Jays believed their fourth straight holiday tournament title was within reach when they got the lead for the first time since the middle of the second quarter.

“The momentum was on our side,” Jefferson City coach Kay Foster said. “We had a chance, it would have been a neat story. But that was fleeting because there was still a lot of time left.”

Addison Morgan’s 3-pointer with 1:30 remaining gave Jefferson City its two-point lead. Helias tied it on its next possession on a short jumper by Adalyn Koelling with 1:10 to play.

Jefferson City then brought the ball up just past halfcourt and held it to run down the clock. The intention was to get into the offense with about :20 remaining with a chance for the victory.

“Then we would try to get a shot and a possible rebound and another shot,” Foster said. ‘But we’ve got young kids.”

Ava Morris got a steal with :12 left to get the ball back for the Lady Crusaders. After a Helias time out, Jacie Buschjost was fouled. It was called an intentional foul and Buschjost converted both shots to make it 55-51 with :07.9 remaining and the Lady Crusaders maintained possession. It only was Jefferson City’s fifth foul of the half, so the Lady Jays needed two more to send Helias to the free-throw line.

Koelling then capped the scoring with a pair of free throws with :02.7 left to make the final 57-51.

“It was a great high school basketball game,” Foster said.

“We emphasize knocking down free throws,” Wiggans said. “The girls do well in practice and you hope it carries over into a game.”

Helias got a spark off the bench from senior Gabrielle Bax, who had 13 points in the first half.

“There’s not many players that can come in and change the whole tempo of game, but she came in and did that,” Foster said. “I knew we’d have matchup problems with her.”

Bax finished with a team-high 15 points.

“Gabrielle Bax did a Gabrielle Bax thing,” Wiggans said. “Sometimes, we call her a backyard basketball player, but she can get things done.”

Helias led 15-13 after one quarter. Jefferson City then used an 8-0 run — all coming from Hannah Linthacum — to take its first lead of the game at 25-23 with 3:10 remaining in the half. The teams swapped points the remainder of the half, which ended with Helias taking a 34-32 advantage into intermission.

“We like to keep teams in the 40-point range, scoring 50 for us and definitely 60 on a given night is hard for us,” Foster said. “But you could tell this was going to be one of those games there was going to be a lot of runs.

“We were up for it tonight.”

Helias led by as many as six points in the third quarter, that coming at 43-37 after a steal and layup by Koelling, But Jefferson City scored the final five points in the quarter, the last coming on a 3-pointer by Morgan, to make it 43-42.

“Anytime you play J.C., especially in the championship game of a tournament, you know you’re going to get their best,” Wiggans said.

Morris and Mikah Edwards hit 3-pointers to start the scoring in the fourth quarter as Helias took its biggest lead of the night at 49-42. That’s when Jefferson City went on the 9-0 run to take the 51-49 lead before Helias posted its winning rally.

“Hopefully it starts to trend the other way, where we can put a team away,” Wiggans said.”That would be nice.”

It’s the first holiday tournament title for Helias since it won the last of three straight in 2001.

“This is something no one can take away from them,” Wiggans said. “It’s something they can be proud of and I’m thrilled this group was the one to do it.”

Linthacum totaled game-highs of 16 points and 12 rebounds for Jefferson City (1-9). Lyssa Sportsman added 14 points, while Morgan totaled 13 points and nine rebounds. Linthacum and Sportsman were named to the all-tournament team.

Manns had 11 points for Helias (9-5), while Koelling chipped in with 10. Koelling was selected as the tournament MVP, while Edwards and Morris were all-tournament picks.

Morris finished with eight points and a team-high 11 rebounds.

“(Morris) is obviously one of their best players,” Foster said. “She’s one that hides under the radar, but we knew she was going to be trouble.

“She might be their best player. She’s not getting enough attention.”

Both teams will resume action Jan. 4 — Helias at Rolla and Jefferson City at Sedalia Smith-Cotton.