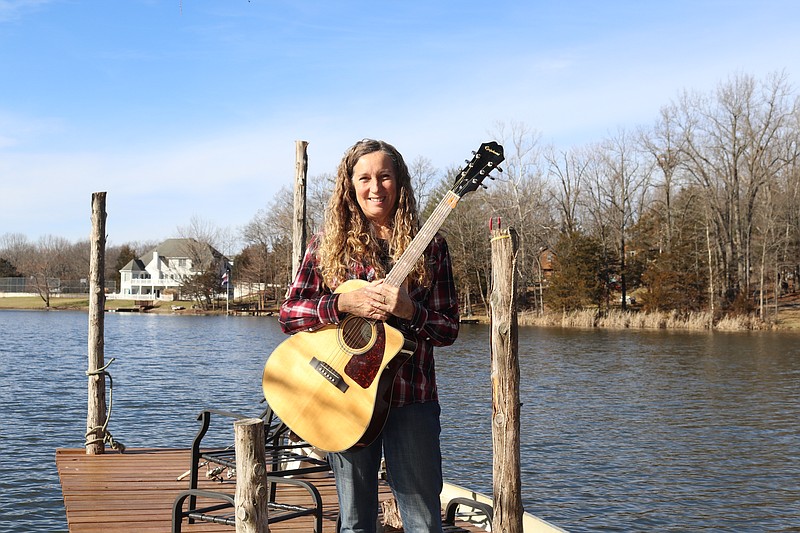 Jan Syrigos holds her guitar on a dock outside her home in Holts Summit.

When Jan Syrigos was growing up in Mid- Missouri, she was immersed in nature.

Speaking from her cabin-like home tucked in the woods in Holts Summit, she gestured out the window to the lake and treeline outside as she recounted her childhood experiences: climbing in treehouses, ice skating on the lake, building forts, collecting acorns, canoeing and camping every year.

Today, she feels some people have missed out on that experience.

"We're starting to see the symptoms of a generation that did not connect with nature," she said.

Those symptoms include loss of focus, fear of the world, substituting virtual adventure for real experiences and unwillingness to take risks. Syrigos said it's "vital" to expose children to nature and conservation.

The program targets children in preschool through fifth grade. A typical program includes five or six songs with a lot of things in between, such as puppets, magic and maybe even a live animal or two, though Syrigos said that's not a guarantee, as she usually has to borrow those.

Children can come up to sing the chorus with Syrigos and perform the actions that go along with it. A favorite is "Reptile Rap," in which, prior to COVID-19, children were given sunglasses and hats to wear as they would "jam" about "cold-blooded, sun-loving" reptiles.

"I really have a desire to connect children with nature, and this gives me an opportunity to introduce it in an engaging way so that they're perhaps excited enough to go explore themselves," Syrigos said. "And I always want to try to connect them with nature versus electronics."

WildHeart had a "gradual launch" years ago. Syrigos originally worked for the Missouri Department of Conservation and did programs at Runge Nature Center, where she would occasionally write songs to encapsulate themes of the program. Her boss caught wind of the performances and asked her to put together a CD and a music video for the department. Syrigos and her husband, George, left the department in 2005 and launched WildHeart in earnest as a duo.

For Jan and George Syrigos, music and nature were always a part of their story.

While Jan was living in Columbia, George was a gardener at Shelter Gardens, where Jan went one day, guitar in hand, to get away.

"I was just singing worship songs underneath a tree. He started circling me in his little golf cart and trying to whistle the songs I was singing so I could get the clue that he knew I was a Christian," she said.

Annoyed and somewhat apprehensive about this stranger, she walked away, and George continued about his work. Then they crossed paths once again.

"He was under a bridge, changing out the lilypads, and I walked over the bridge and he pops up like this troll," she recounts with a laugh.

Their conversation led to friendship, and down the road, marriage.

George joined Jan in recording her second CD, and their daughter later sang with them as well.

"He's a wonderful vocalist," Jan Syrigos said of George. "He's great at that, and he's a kid wrangler. He loves kids."

Jan Syrigos won an Emmy for her performances, and continues with WildHeart today, while George works for the Department of Natural Resources.

Jan Syrigos also teaches a class about the outdoors at Lighthouse Preparatory Academy. The class is almost always hosted outside, regardless of weather, and students go kayaking, try ropes courses, visit Runge Nature Center, and even learn about building a fire, as well as other outdoor skills. They also practice "solitude" outside by taking five minutes of solo time each day in which they spread out and don't talk or interact with others. It's a way to feel at peace and take time to talk to themselves internally or to God, Syrigos said.

While winter is an offseason for WildHeart, Syrigos is always preparing and writing songs. She's also been able to do some filming for her virtual programs, which are a necessity for some venues during COVID-19. She recently worked on a special for the Bicentennial called "Show-Me Missouri," Syrigos' current favorite song.

Things tend to pick up in March, when Syrigos will get bookings for schools, nature centers, libraries and state parks throughout Missouri, Illinois, Iowa, Arkansas, Kansas and other surrounding states.

Her goal for WildHeart concerts is two-fold: to bring joy to children to make the experience memorable and to encourage them to explore nature.

"I hope they learn enough about nature to not be afraid of it, and also to have their interest piqued to go explore further," she said. The seed that I want them to take away is that, 'nature is cool, don't be afraid of it, get outside and play in it,'" she said.