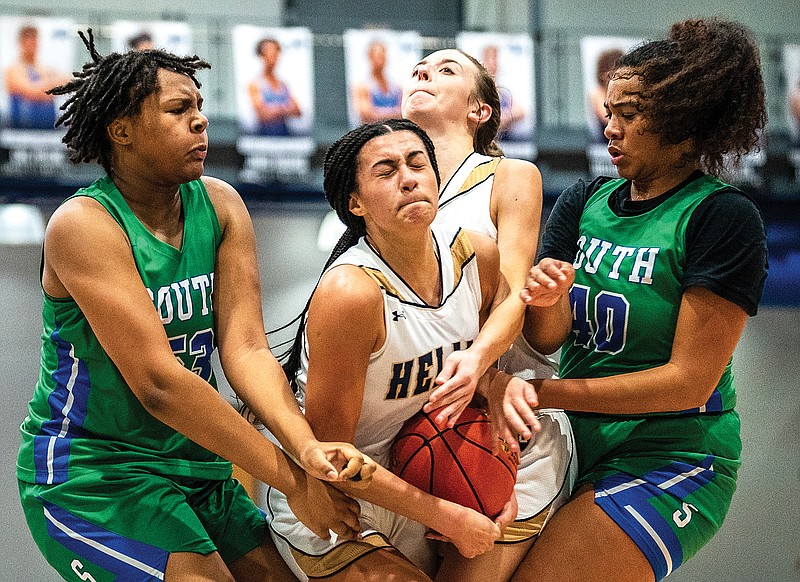 The Helias Lady Crusaders came back from seven points down in the fourth quarter for the second straight day Tuesday to beat Blue Springs South 60-46 in the semifinals of the Jefferson Bank Holiday Hoops Tournament at Capital City High School.

“I am super excited for the girls,” Helias coach Garrett Wiggans said. “They battled and handled adversity. You have to give all the credit in the world to those girls. That is Lady Crusader basketball to a T.”

The Lady Crusaders (8-5) trailed for a majority of the game, like they did Monday night against St. Jospeh Benton, but they used a 20-0 run in the fourth quarter to stun the Lady Jaguars.

Blue Springs South (5-2) jumped out to a fast start Tuesday, led by senior guard Saneea Bevley. Bevley had the 3-ball working and finished with a game-high 20 points on 6-of-11 shooting from behind the arc.

This allowed the Lady Jaguars to jump out to a 15-7 lead after the first quarter. Bevley hit two 3s in the first quarter and two more in the second quarter. Blue Springs South seemed to be in full control as it took a 33-23 lead into the half. This was true until Wiggans threw the kitchen sink of defenses at the Lady Jaguars in the second half, mixing up the looks it gave them on virtually every possession.

“Coming in, we talked about throwing a lot of different looks at them,” Wiggans said. “(Bevley) got hot there and we were not doing a great job of getting a hand in her face. There for awhile, it was almost every possession we were changing defenses. Again, you have to give the girls credit. They were adjusting on the fly when we were switching defenses without a dead ball. That is really big. We did some box-and-one, a little 13, full-court man and half-court man. We threw it all at them.”

The gamble to switch defensive looks so often in the second half paid off. After trailing by ten at halftime, the Lady Crusaders were able to cut the lead down to five heading to the fourth after winning the third quarter 13-8.

The fourth quarter was all Helias as it held Blue Springs South to only five points, including none in the final 3:54 of the game. This allowed the Lady Crusaders offense to go on their 20-0 run. Comeback victories two nights in a row has Wiggans proud of his young team.

“If you have a team that can comeback and finish a game off like that, especially if you start two juniors and three sophomores, that can only be a good thing,” he said. “I am just proud of them that they have that fight and they are never out of a basketball game.”

The second half of this one looked more like a heavyweight boxing match than a basketball game at times. After a combined six fouls in the first half, the two teams combined for 21 fouls in the second half. Even though Blue Springs South is a much bigger team, Helias thought a physical game played right into its hands.

“I thought our team handled it really well,” Wiggans said. “We talk physicality and our practices are just as physical as that, if not more. That was not anything new for our team, and I like to preach to embrace the physicality of the sport of basketball. I think it makes them better basketball players.”

The win pushes Helias into the championship of the Jefferson Bank Holiday Hoops Tournament where it will face Jefferson City (1-8) after it defeated Vashon 61-45 in overtime. Helias has not reached the title of the tournament since 2011 and has not won it since 2001. Winning the title would mean a lot to the Lady Crusader program.

“We talked earlier and we could not remember the last time the Lady Crusaders even played in the championship of this tournament,” Wiggans said. “It’s going to be big for us. I told the girls that it is not good enough to just appear in the title game, might as well win it if you are going to play in it.”

Helias will get its chance to do just that when it takes on Jefferson City at 5:30 today at Capital City High School.