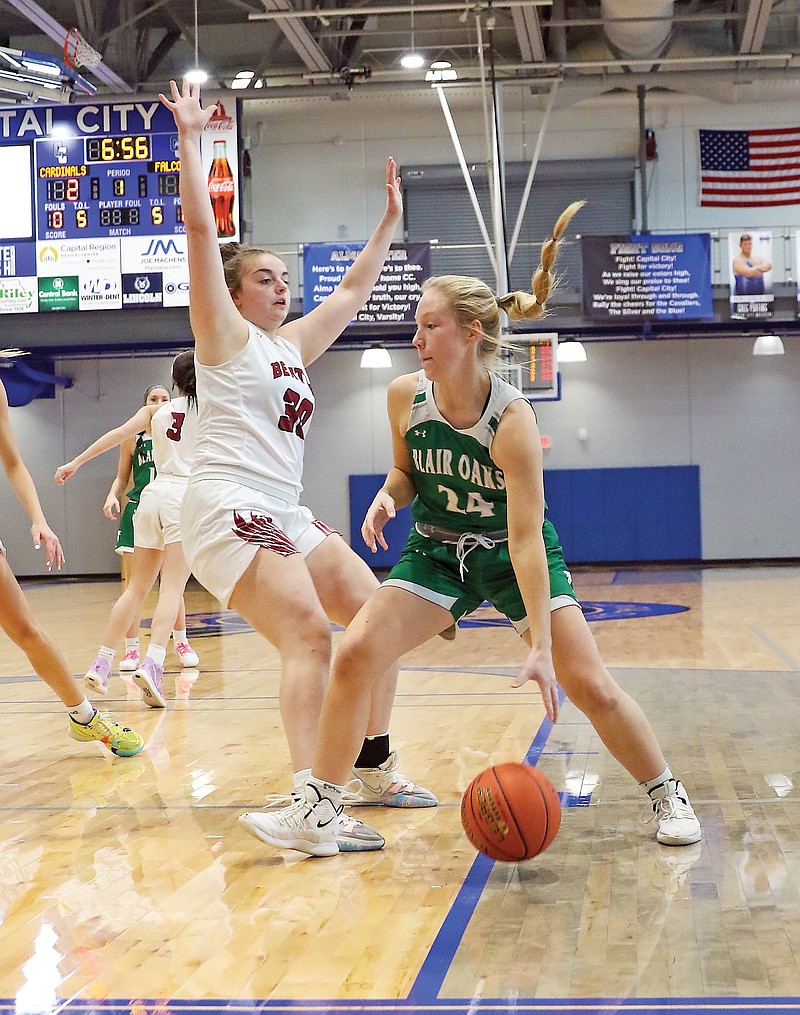 Blair Oaks lost for the second time in two days Tuesday after its 60-32 defeat at the hands of the St. Joseph Benton Lady Cardinals in the consolation bracket of the Jefferson Bank Holiday Hoops Tournament.

If you only watched the first quarter, it would be very hard to believe the final score.

The Lady Falcons (6-6) led 13-7 after one quarter and were getting easy looks repeatedly. They scored on their first three possessions, all coming off assists and seemed to be off and running. Blair Oaks jumped out to a 9-2 lead in the first three-and-a-half minutes.

“It was a really good first quarter,” Blair Oaks coach Brandon Moore said. “We exploited their 1-2-2 press there in the first quarter and that’s how we found success.”

The second quarter was a completely different story. The Lady Cardinals (6-4) dominated the quarter 21-6 and never looked back. Benton coach Chris Michaels did not switch out of the press, but switched the press into a face guarding press defense to deny the Lady Falcons’ better ball handlers from getting the ball as easily. This style of defense has given Blair Oaks trouble so far this season.

Turnovers were a huge issue for the Lady Falcons on Tuesday night, ending the game with 20. The face guarding press definitely made things more difficult for Blair Oaks, but its focus level was not as high as we are used to seeing it.

“You got to be calm under pressure in those situations,” Moore said. “You have to understand as a player what you have to do differently when someone is face guarding you. Be strong with the ball and know where you are going to go with it once you get it. We have to continue to work on these things in practice and be able to adjust when a team is guarding us in a physical way like we saw today.”

Benton looked like the more athletic team Tuesday. The Lady Cardinals were able to get out in transition over-and-over again from the second quarter on. This attack was led by junior Kelsey Johnson who finished the game with game-highs 15 points and eight rebounds. Moore thinks his team was more tired than Benton was and that was the biggest reason the Lady Cardinals got out in transition so much.

“They were an athletic team, but we are too,” he said. “I think towards the end of the game we definitely had tired legs, so if it looked like they had the step athletically it came from that. It’s not as much a matter of athleticism as it is that we need to execute.”

A bright spot for the Lady Falcons was junior guard Emma Wolken. She finished with team-highs 13 points and five rebounds. At times when it looked like Blair Oaks had lost motivation to continue competing, Wolken was right in the middle competing as hard as anyone. She ended the game 6-of-6 from the field and battled until the final whistle.

“She is huge for us,” Moore said. “She’s averaging over 10 points per game and six rebounds a game. As a guard, if you get six rebounds a game that is really saying something. She has been really consistent for us and has been taking good care of the basketball. We are going to need her big here in the second half of the season.”

The Lady Falcons were expecting to welcome back senior center Jazmin Reinkemeyer after missing Monday’s game against Blue Springs South for personal reasons, but she was unable to go again Tuesday. Getting Reinkemeyer back will be a huge bonus for Blair Oaks.

“She’s got some personal stuff going on with her family,” Moore said. “We thought we would have her back today, but unfortuantely she was not quite ready to go. We will get her back when she is ready.”

Blair Oaks will take on the Helias junior varsity team at 1 p.m. today after it replaced Hickman, who dropped out of the tournament due to COVID-19 concerns.