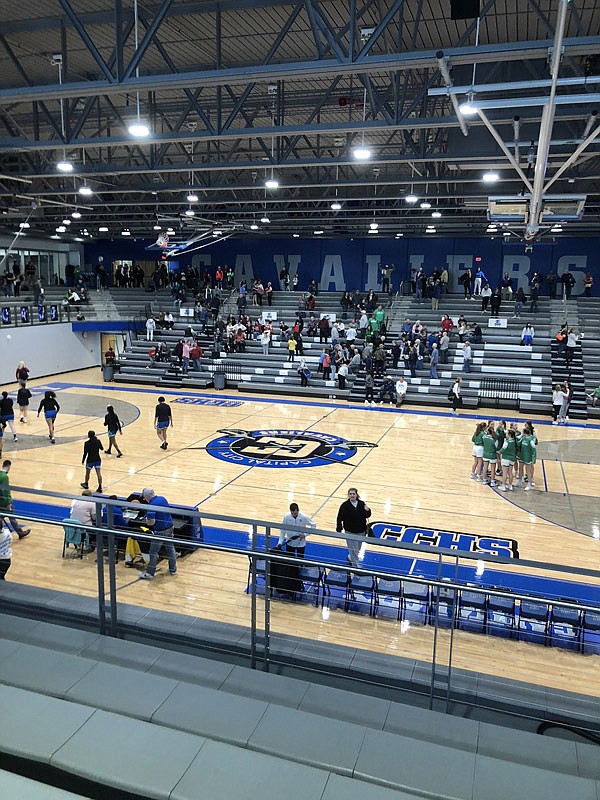 The Blair Oaks Lady Falcons dropped a tough one Monday night in the opening round of the Jefferson Bank Holiday Hoops Tournament to a talented Blue Springs South team.

Without forwards Autumn Bax and Jazmin Reinkemeyer, the Lady Falcons lost 56-50 to the Lady Jaguars after four quarters could not decide this one. The size of Blue Springs South, led by sophomore forwards Alexis Alexander and Kendall Puryear, was too much for Blair Oaks as it was outrebounded 32-20 in the contest.

“We had to make an adjustment and pack the defense in,” Blair Oaks coach Brandon Moore said. “We switched to a 2-3 zone and once we got dialed into that, I thought we did a really great job. Holding a team as talented as that to 56 points is all a coach could ask for. I thought our girls that were giving up size and don’t normally get as many minutes did a really good job.”

The Lady Falcons (6-5) also ran into some trouble on the offensive end. Blue Springs South was hedging ball screens aggressively and it forced Blair Oaks into tougher possessions.

“Our offense was a little clunky,” Moore said. “We got some success off of ball screens so we tried to go back to that a lot in the fourth quarter, but they hedged really, really well. That is something that we do not see a lot in our league, typically it is more of a flat hedge or a zone look.”

Blue Springs South was also not at full strength.

The Lady Jaguars were missing their senior leading scorer and ball-handler Jaidynn Mason. This left the point guard duties to be split between Tiyani Rollins and Saneea Bevley. Blair Oaks made their lives difficult, holding the two to a combined 5-of-23 from the field.

The difference in the game was the work that Alexander and Puryear were able to do in the paint. Alexander finished with a team-high 18 points while Puryear was able to add 17 more. The two forwards shot a combined 17-of-22 from the floor and got numerous key baskets down the stretch of the fourth quarter and into overtime.

Blair Oaks was led on offense by junior guard Emma Wolken. Wolken led the way with 20 points and looked the most comfortable for the Lady Falcons on the offensive end. She was aggressive and did not shy away from contact from the bigger Blue Springs South players.

“I thought Emma played great,” Moore said. “She attacked the paint and was able to get some difficult shots to go. That was really big for us and helped keep us in the game.”

Blair Oaks will not be without its two forwards for much longer. Reinkemeyer will be back in the lineup today for the Lady Falcons and Bax will be able to return to the floor Jan. 6, when they hit the road to face Linn. This has Moore staying positive, even after a tough loss Monday night.

“It is easy to get down on yourself when you lose, but the key takeaway from this one for me is that we did battle really hard,” Moore said. “We were down two post players, which they had plenty of on the other side, but we got the opportunity to get back after it tomorrow.”

Blair Oaks will take on St. Joseph Benton (5-4) at 2:30 p.m. today after the Lady Cardinals lost 41-39 to Helias after letting a seven-point fourth quarter lead slip away.

“We can’t let ourselves sit and wallow in a tough loss like we had tonight,” Moore said. “We have to wake up tomorrow ready to take on another tough team in St. Joeseph Benton. It’s another big challenge for us.”