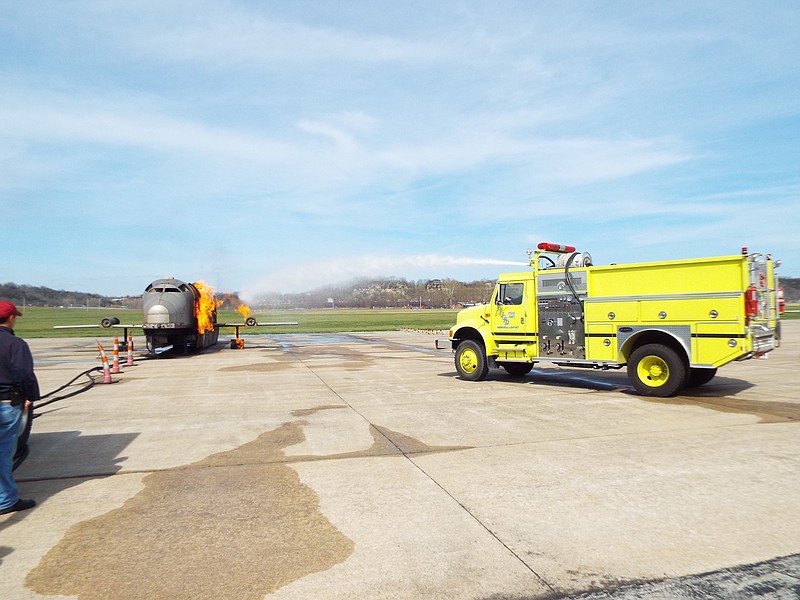 A little more than a year ago, Griffith and Schofield convened a meeting to bring to light the need to replace the aging fire apparatus, now more than 30 years old. Griffith said the existing equipment came to Jefferson City from Columbia when it was retired from their fleet.

Griffith said he and Schofield felt the timing was right to bring this back to the attention of the advisory committee, and they gave unanimous approval to move forward to get a new apparatus if and when the dollars for a grant were made available.

Schofield said the Jefferson City airport on average accommodates more than 93 flights per day and is ranked as the sixth busiest airport in the state.

"Those flights serve a wide variety of individuals and groups, including elected officials, state government employees, numerous private organizations and our military," Schofield said. "At some point you, your staff, a friend, neighbor or colleague have likely used the Jefferson City airport for travel."

Schofield said JCFD firefighters have the training to deal with emergency calls at the airport, but the Aircraft Rescue and Fire Fighting (ARFF) truck, which was manufactured in 1991 and purchased in 2006, has reached the end of its useful life and is becoming functionally obsolete. He noted the Federal Aviation Administration recommends a 10- to 12-year replacement cycle for all ARFF trucks.

"The city has limited dollars available for allocation and with a price tag of approximately $869,000, this equipment purchase would overburden an already limited budget," Schofield said. "We know that traditional federal airport funds for replacement of ARFF equipment are only available to airports that offer commercial passenger services.

"A specialized apparatus like this is difficult to fund through other grant opportunities that prioritize requests for daily-use and front-line equipment, but will continue to explore all avenues available to us," he said.