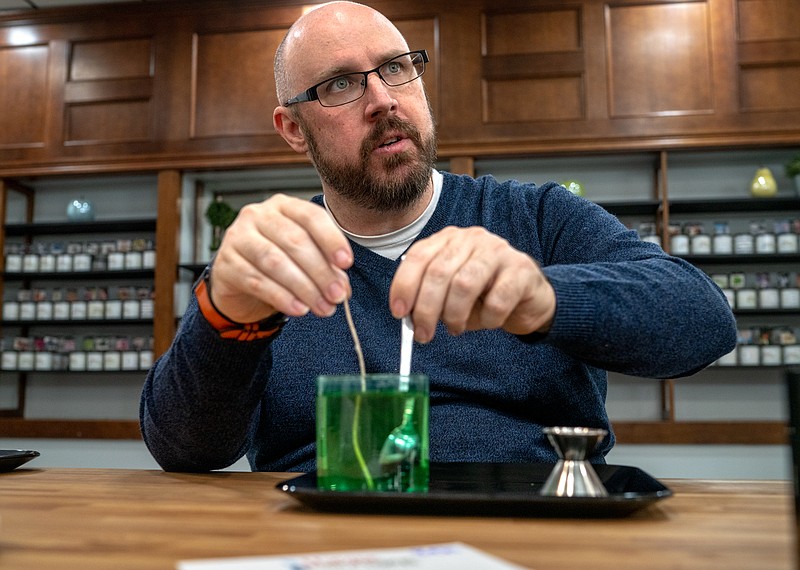 As Callaway County's assistant prosecutor, he has a good amount of experience with public speaking. He often addresses juries and judges during courtroom trials. As a college student, he studied vocal performance before switching majors, so he had some training in singing.

But he had no formal acting training when he went to Capital City Productions about 1½ years ago looking to be involved in local theater.

Now, he has some 10 productions under his belt, including his first starring role this fall as Dr. Frederick Frankenstein in "Young Frankenstein," originally a 1974 comedy/horror directed by Mel Brooks.

Miller, who moved to Mid- Missouri with his wife and two children about nine years ago, lives in Holts Summit and is a member of Concord Baptist Church in Jefferson City.

He joined the church choir, surprising some of his fellow church members who didn't know he could sing. Some of them told Miller that Jefferson City has a thriving community theater scene.

"You should check it out and get involved in a play or two," they said.

He took their advice and gave it a try.

A big key to acting, he's learned, is flexibility -- the ability to read the room, react and interact with the audience.

"I really do love the work I do with Capital City Productions," he said. "It's a really great hobby to have."

He said he loves working with Capital City Production's Rob Crouse, who directed "Young Frankenstein." Crouse, he said, is "an absolute wealth of knowledge" who didn't have to take a chance on him.

As a prosecutor, his primary caseload is with child sex cases.

"So it's really great to go to the theater and be someone else for a while," he said. "But as emotionally heavy as the job is, it's one I would never give up for anything. I really do love what I do."

With positions such as his often come "vicarious trauma." When you deal with people who have trauma, some of that becomes a part of you, he said.

"When I go to the theater, I'm with people who love the theater, who love their craft," he said. "I can be someone different, whether it's a good guy or a bad guy. You put all your troubles on hold. So it really is an energizing experience."

"He has become an invaluable member of the CCP family and is always willing to help out whenever needed," Crouse said. "On top of it all, he is one of the nicest people you will ever meet. He has become a great friend, and I look forward to working with him on future projects."

Rehearsing for a production sometimes requires Miller and the other cast/crew members to spend 20 hours a week rehearsing, blocking, memorizing lines, etc.

"Even though you spend a lot of time there, I come away with more energy. It kind of refuels me for the next day at work," he said.

CORRECTION: Ben Miller “is hoping voters will pick him as the county’s prosecutor.” This article was edited at 1:47 p.m. Dec. 27, 2021, to remove the wrong name used in the original version of the sentence.